The most titles of the League won was two by 11 different teams out of various now independent republics. The last winners of the League were FC Karpaty Lviv, FC Asmaral Moscow, and FC Okean Nakhodka.

Between 1963 and 1970 football competitions in Class B were split by republican principle at first as tier two, then as tier three, and at the end in 1970 it was downgraded to the auxiliary tier four (or lower tier three). Each territorial Class B competition had multiple number of sub-groups that were known as zones. Winners of each territorial (republican) Class B was granted promotion to Class A Second Group (First League). Also on occasions, there were relegation play-offs to allow rotation for the collective of physical culture (KFK).

In 1970-1971 the Soviet league system was restructured for lower leagues and Class B competitions were discontinued. Republican competitions were conducted with the Soviet Second League which consisted of multiple groups (zones). There was no explicit designation of zones as they were simply numerated. Initially the league consisted of six groups, but for the next couple of season was increased to seven before reducing back to six again. Normally winners of group were getting promoted to the First League.

In 1980 the league was expanded to 9 groups, winners of which qualified for a mini-tournament that consisted of three groups with three teams. The three winners of that mini-tournament received promotion to the First League. This format remained in place until 1989.

Republican competitions continued to be conducted among collective of physical culture and were considered as amateur.

In 1990 the league again went through another transformation reducing the number of groups from 9 to 3, winners of which would have been promoted to the First League. Due to withdrawal of teams, promotion and relegation was disrupted and the 1991 season became the last.

There were over 520 teams that played in the third tier competitions. [1]

1Three points for a win. In 1973, a point for a draw was awarded only to a team that won the subsequent penalty shootout. In 1978–1988, the number of draws for which points were awarded was limited.

The Soviet First League in football was the second highest division of Soviet football, below the Soviet Top League.

The Ukrainian Second League is a professional football league in Ukraine which is part of the Professional Football League of Ukraine, a collective member of the Ukrainian Association of Football. As the third tier it was established in 1992 as the Transitional League and changed its name the next season. 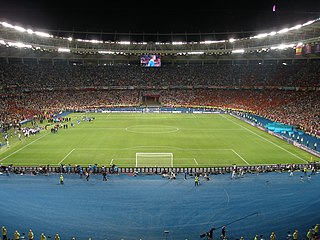 The 1996–97 Ukrainian Second League is the 6th season of 3rd level professional football in Ukraine. The competition commenced on 10 August 1996 and ended on 21 June 1997.

FC Dynamo Odessa was an association football team from Odessa. It is widely believed that the club along with Pishchevik were predecessors of FC Chornomorets Odessa.

The Soviet Union football league system, was a series of interconnected leagues for men's association football clubs in Soviet Union which included "teams of masters" from constituent union republics. The system has a hierarchical format with promotion and relegation between leagues at different levels, allowing even the smallest club the theoretical possibility of ultimately rising to the very top of the system. For most of its time, the all-Union level had two tiers, while for good potion of the Soviet period there existed third and much less period forth tiers.

The 1963 Soviet Football Championship was the thirteenth season since creation of Class B in 1950 in place of the Vtoraya Gruppa. At the same time, in 1963 the Class B tournament was shifted one tier down in the Soviet league system. In this way the third level competitions were revived for the first time since 1937.

The 1989 Soviet Second League was the Soviet third tier competitions of the Soviet football championship. The competitions of the league were conducted as part of the whole Soviet event and were split in nine groups geographically as regional zones. There were 169 teams that completed the season with the most teams (26) competing in the Zone VI and smallest zones IV and IX having 16 teams. In the article a regional designation in parenthesis is conditional and was never actually openly publicized.