The Spanish Olympic Committee (Spanish : Comité Olímpico Español, COE) is responsible for Spain's participation in the Olympic Games. Members of the committee are 35 sports federations, which elect the Executive Council composed of the president and 23 members.

The committee of the COE is represented by [2] :

The Spanish National Federations are the organizations that coordinate all aspects of their individual sports. They are responsible for training, competition and development of their sports. There are currently 33 Olympic Summer and two Winter Sport Federations in Spain. [3]

Spain competed at the 1980 Summer Olympics in Moscow, USSR. In partial support of the American-led Olympics boycott, Spain competed under the Olympic Flag instead of its national flag. 155 competitors, 146 men and 9 women, took part in 75 events in 18 sports.

Spain competed at the 1988 Summer Olympics in Seoul, South Korea. 229 competitors, 200 men and 29 women, took part in 130 events in 24 sports. At the closing ceremony, a Spanish segment was performed, as the country hosted the next Olympics in Barcelona.

Spain was the host nation for the 1992 Summer Olympics in Barcelona. The Games were quite exceptional for Spain because their athletes were competing not only in their home country, but also in the home city of IOC President Juan Antonio Samaranch. 422 competitors, 297 men and 125 women, took part in 195 events in 29 sports.

On June 8, 1950, the United States government approved Public Law 600, authorizing Puerto Rico to draft its own constitution in 1951. The Constitutional Assembly met for a period of several months between 1951 and 1952 in which the document was written. The framers had to follow only two basic requirements established under Public Law 600. The first was the document must establish a republican form of government for the island. The second was the inclusion of a Bill of Rights.

The Spanish Episcopal Conference (SEC) is an administrative institution composed of all the bishops of the dioceses of Spain and Andorra, in communion with the Roman Pontiff and under his authority. Its purpose is the joint exercise certain pastoral functions of the episcopate on the faithful of their territory, under common law and statutes, in order to promote the life of the Church, to strengthen its mission of evangelization and respond more effectively to the greater good that the Church should seek to men.

Spanish Federation of Sportspeople with the Intellectually Disabilities is one of five disability sport organizations that deals with sport on the national level. It focuses on intellectual disabilities, one of two in the country to do so nationally. It has a high performance focus.

Spanish Federation of Sports for the Deaf is the national governing body for deaf sports in Spain. Based in Madrid and created in 1993, they are one of five disability sport organizations that are members of the Spanish Paralympic Committee. 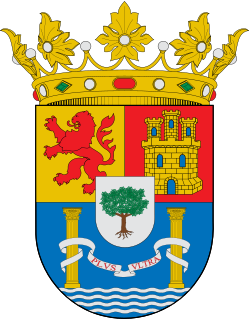 The Medal of Extremadura is the highest institutional distinction of the Autonomous Community of Extremadura, Spain. It was established in 1986, following Decree 27/1986, of 29 April.