The Moscow Literary Sreda (Russian : Моско́вская Литерату́рная Cреда, translit.  Moskovskaya Literaturnaya Sreda/Moskovskaja Literaturnaja Sreda) was a Moscow literary group founded in 1899 by Nikolai Teleshov. The name Sreda means Wednesday, taken from the day of the week on which writers and other artists met at Teleshov's home. The last meeting of the Sreda took place in 1916. [1] [2] [3] [4] 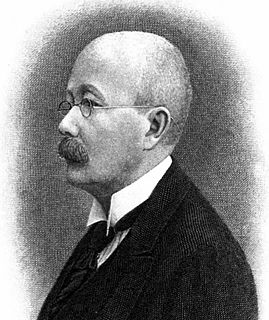 Pyotr Dmitryevich Boborykin was a Russian writer, playwright, and journalist. 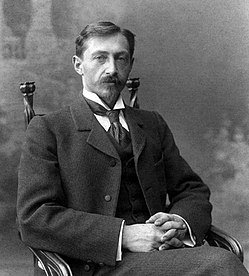 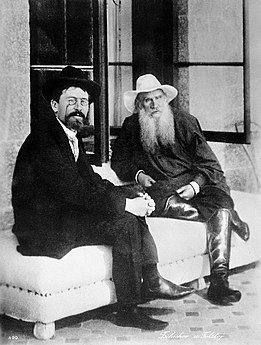 Russian literature refers to the literature of Russia and its émigrés and to the Russian-language literature. The roots of Russian literature can be traced to the Middle Ages, when epics and chronicles in Old East Slavic were composed. By the Age of Enlightenment, literature had grown in importance, and from the early 1830s, Russian literature underwent an astounding golden age in poetry, prose and drama. Romanticism permitted a flowering of poetic talent: Vasily Zhukovsky and later his protégé Alexander Pushkin came to the fore. Prose was flourishing as well. The first great Russian novelist was Nikolai Gogol. Then came Ivan Turgenev, who mastered both short stories and novels. Leo Tolstoy and Fyodor Dostoevsky soon became internationally renowned. In the second half of the century Anton Chekhov excelled in short stories and became a leading dramatist. The beginning of the 20th century ranks as the Silver Age of Russian poetry. The poets most often associated with the "Silver Age" are Konstantin Balmont, Valery Bryusov, Alexander Blok, Anna Akhmatova, Nikolay Gumilyov, Osip Mandelstam, Sergei Yesenin, Vladimir Mayakovsky, Marina Tsvetaeva and Boris Pasternak. This era produced some first-rate novelists and short-story writers, such as Aleksandr Kuprin, Nobel Prize winner Ivan Bunin, Leonid Andreyev, Fyodor Sologub, Aleksey Remizov, Yevgeny Zamyatin, Dmitry Merezhkovsky and Andrei Bely. 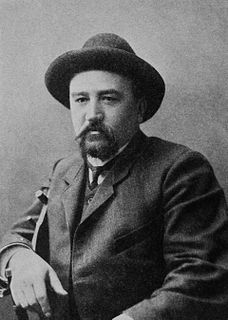 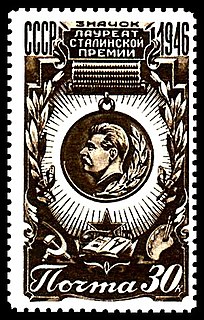 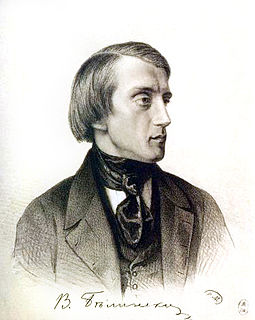 Vissarion Grigoryevich Belinsky was a Russian literary critic of Westernizing tendency. Belinsky played one of the key roles in the career of poet and publisher Nikolay Nekrasov and his popular magazine Sovremennik.

Dmitry Narkisovich Mamin-Sibiryak was a Russian author most famous for his novels and short stories about life in the Ural Mountains.

The Russian Messenger or Russian Herald has been the title of three notable magazines published in Russia during the 19th century and early 20th century. Since 1991, in Moscow, a new publication named the Russian Messenger has appeared once again. It is published weekly and its editor-in-chief from 1991-2013 was Alexei Senin, from 2014 Oleg Platonov. 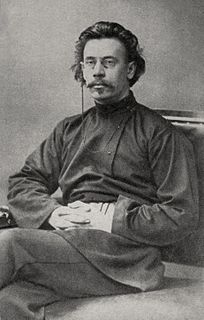 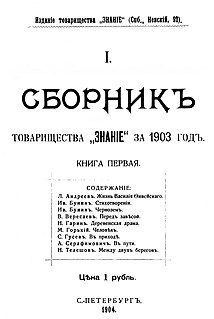 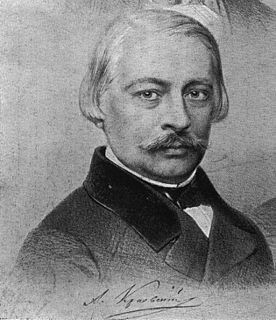 Natural School is a term applied to the literary movement which arose under the influence of Nikolai Gogol in the 1840s in Russia, and included such diverse authors as Nikolai Nekrasov, Ivan Panayev, Dmitry Grigorovich, Ivan Turgenev, Alexander Hertzen, Ivan Goncharov, Vladimir Dal, Mikhail Saltykov-Shchedrin, Fyodor Dostoyevsky and Evgeny Grebyonka, among others. Modern day Russian historians of literature use the term only in its historical context, otherwise preferring to speak of "the earliest stage of critical realism in Russia."

Mir Bozhiy was a Russian monthly magazine published in Saint Petersburg in 1892-1906. It was edited first by Viktor Ostrogorsky (1892-1901), then by Fyodor Batyushkov (1902-1906). In July 1906 Mir Bozhiy was closed by censors. The publisher of the magazine was Alexandra Davydova, mother-in-law of Alexander Kuprin.

Istorichesky Vestnik was a Russian monthly historical and literary magazine published in Saint Petersburg in 1880-1917.

Russkaya Rech was a Russian fortnightly literary and political magazine which was launched in Moscow on 1 January 1861 by the writer and journalist Evgenya Tur who went on to become also its editor. 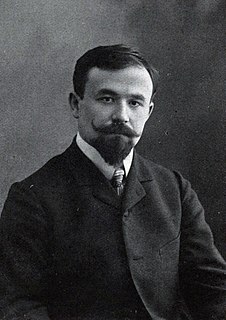