Up to the present, short stories are a very important part of Sri Lankan literature; the output of Sinhalese short story writers has elicited a greater measure of critical analysis.[ citation needed ]

Mahagama Sekera Sri Lankan poet, lyricist, playwright, novelist, artist, translator and filmmaker. He is considered to be a significant figure in Sinhalese poetry and literature. Sekara is best remembered as a poet and songwriter with several of his works even becoming popular songs in Sri Lanka. His works occasionally have an introspective Buddhist influenced outlook. His poems and songs remain widely quoted on the island nearly thirty years after his death..

Siri Gunasinghe was a Sri Lankan academic, poet, Sanskritist, art historian, author and filmmaker. He played a crucial role in honing the creativity of free Sinhala poetry. Gunasinghe was one of the most important advocates of the use of spoken language instead of the literary language in Sinhalese literature. 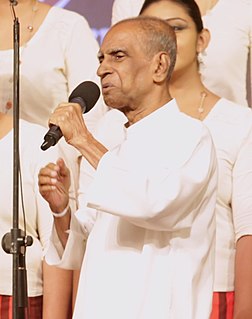 Sri Lankabhimanya Wannakuwattawaduge Don Albert Perera, better known by his adopted name Amaradeva, was a prominent Sri Lankan Sinhalese vocalist, violinist and composer. Primarily using traditional instruments like sitars, tablas and harmoniums, he incorporated Sinhala folk music with Indian ragas in his work. Many consider his contribution to the development of Sinhala music as unmatched; hence, he is occasionally cited as the "Maestro of Sri Lankan Music".

The Hela Havula is a Sinhalese literary organisation founded by Kumaratunga Munidasa in January 1941. 'Hela Hawula' was formed as the only organization in Sri Lanka to protect and uplift the Sinhala language, Sinhala land and Sinhala culture. 'Hela Hawula' has been recognized as a statutory body by the adoption of the Hela Hawula Establishment Act No. 38 in the Parliament of Sri Lanka Act No. 1992.

Sath Samudura is a landmark Sri Lankan film directed by professor Siri Gunasinghe and released in 1967. This film was critically acclaimed and is considered a major work in Sri Lankan cinema.

Deshabandu is the third highest national honour awarded in Sri Lanka. It is awarded "for meritorious service". The title is held by no more than 150 living holders at any time. It is conferred with a citation and a silver medal with a symbol of a peacock. It is conventionally used as a title or prefix to the awardee's name.

Deshanabu Tissa Ananda Abeysekara was a Sri Lankan filmmaker, actor, writer, director, screen playwright and political activist. He is better known as a script writer for the cinema as well as a film director. In 1996, his book Bringing Tony Home won the prestigious Gratiaen Prize for the new creative writing in English. He was the chief coordinator of FOSWAL in Sri Lanka and honoured awardee of SAARC Literary Award.

In November 2005 President of Sri Lanka Chandrika Kumaratunga awarded national honours to 231 individuals for distinguished services. The awards ceremony was held on 14 November 2005 at the Bandaranaike Memorial International Conference Hall in Colombo.

Kala Suri Attanayake Mudiyanselage Podi Manike, popularly as Manike Attanayake, is an actress in Sri Lankan cinema, theater and television. She is best known for the role in television serial Palingu Manike. In 1987, she was honored with "Kalasuri", becoming the youngest Sri Lankan to win that award. 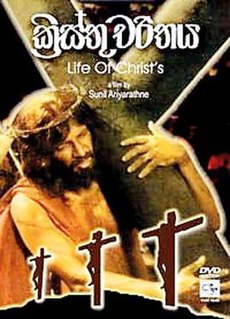 Christhu Charithaya is a 1990 Sri Lankan Sinhala biographical film directed by Sunil Ariyaratne and produced by Alerik Lionel Fernando. It stars Vijaya Kumaratunga as Jesus along with ensemble cast of popular film artists. Music composed by Premasiri Khemadasa. It is the 712th Sri Lankan film in the Sinhala cinema.

Gevindu Kumaratunga is a Sri Lankan politician and Member of Parliament.