The Ståhlberg kidnapping refers to an incident that occurred on October 14, 1930, at approximately 9:00 AM EET, in which the former and first President of Finland, Kaarlo Juho Ståhlberg, and his wife, Ester Ståhlberg, were abducted from their home in Helsinki, Finland, by members of the Lapua Movement. [1] [2] The kidnapping was spearheaded by an ex-White general by the name of Kurt Martti Wallenius. Threats of execution were issued when the Lapuans' demands were not met, however Wallenius and his henchmen were too incompetent to handle the kidnapping and too hesitant to carry out their murder threat. [2] The Finnish public was both ashamed and horrified by this pointless act of lawlessness, and a general adverse reaction against the Lapuans greatly eroded their already dwindling popular support. [2] In addition to this, the kidnapping was decisive in forcing the election of Pehr Evind Svinhufvud to the presidency against Ståhlberg in February 1931. [1] After the kidnapping the Lapuans threatened to assassinate Ståhlberg. [3]

Lauri Kristian Relander was the second President of Finland (1925–1931). A prominent member of the Agrarian League, he served as a member of Parliament, and as Speaker, before his election as President. 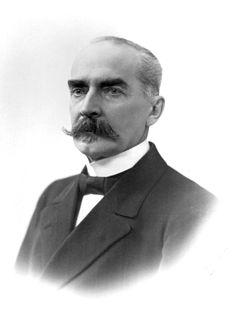 The Lapua Movement was a radical Finnish nationalist and anti-communist political movement founded in and named after the town of Lapua. After radicalisation it turned towards far-right politics and was banned after a failed putsch in 1932. The movement's anti-communist activities continued in the parliamentarian Patriotic People's Movement.

Paavo Juho Talvela was a Finnish soldier and a Knight of the Mannerheim Cross. He volunteered in the Jäger Movement in Germany from 1916 until 1917. He was then a battalion commander in the Finnish Civil War. Afterwards Talvela was promoted to the rank of major, and was at the time the youngest major in Finland. In accordance with his nationalistic views, Talvela temporarily resigned from the Finnish Army to act as a leading figurehead for the Kinship Wars of the 1920s. He served as the Commander in Chief of the 1919 Aunus expedition. 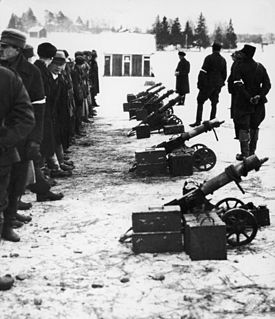 The Mäntsälä rebellion was a failed coup attempt by the Lapua Movement to overthrow the Finnish government. 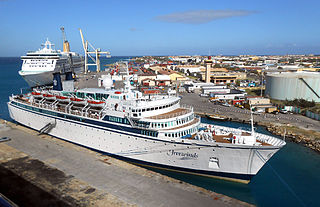 MV Freewinds is a former cruise ship operated by International Shipping Partners and owned by San Donato Properties, which is a company affiliated with the Church of Scientology. She was built in 1968 by Wärtsilä Turku Shipyard in Turku, Finland for Wallenius Lines as MS Bohème for service with Commodore Cruise Line. She was the first cruise ship built in Finland. Her ownership passed to a Church of Scientology-controlled company in 1985.

The Young Finnish Party or Constitutional-Fennoman Party was a liberal and nationalist political party in the Grand Duchy of Finland. It began as an upper-class reformist movement during the 1870s and formed as a political party in 1894. 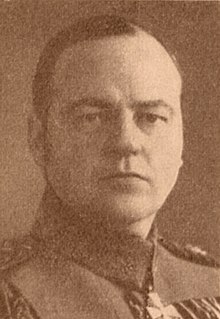 Two-stage presidential elections were held in Finland in 1925. On 15 and 16 January the public elected presidential electors to an electoral college. They in turn elected the president. The result was a victory for Lauri Kristian Relander, who won on the third ballot. The turnout for the popular vote was just 39.7%. The outgoing president, K.J. Ståhlberg, had refused to seek a second term. According to the late Agrarian and Centrist politician, Johannes Virolainen, he stepped down after one term because he believed that an incumbent president would be too likely to win re-election. President Ståhlberg claimed that he had already completed his political service to Finland as president. Moreover, he wanted to step down because many right-wing Finns opposed him. According to Pentti Virrankoski, a Finnish historian, President Ståhlberg hoped that his retirement would advance parliamentary politics in Finland. Ståhlberg's party, the Progressives, chose Risto Ryti, the governor of the Bank of Finland, as their presidential candidate. The Agrarians only chose Lauri Kristian Relander as their presidential candidate in early February 1925. The National Coalitioners originally chose former Regent and Prime Minister Pehr Evind Svinhufvud as their presidential candidate, but before the presidential electors met, they replaced Svinhufvud with Hugo Suolahti, an academician working as the rector (principal) of the University of Helsinki. Relander surprised many politicians by defeating Ryti as a dark-horse presidential candidate, although he had served as the Speaker of the Finnish Parliament, and as Governor of the Province of Viipuri. Ståhlberg had quietly favoured Ryti as his successor, because he considered Ryti a principled and unselfish politician. He was disappointed with Relander's victory, and told one of his daughters that if he had known beforehand that Relander would be elected as his successor, he would have considered seeking a second term.

Two-stage presidential elections were held in Finland in 1931. On 15 and 16 January the public elected presidential electors to an electoral college. They in turn elected the President.The result was a victory for Pehr Evind Svinhufvud, who won on the third ballot by just two votes. The turnout for the popular vote was 47.3%. 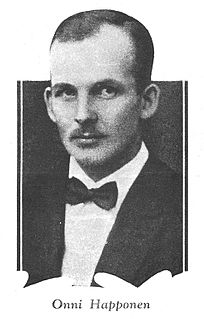 Onni Happonen was a Finnish politician representing the Social Democratic Party of Finland. He was kidnapped and murdered by the fascist Lapua Movement.

Johannes (Jussi) Muilu was a farmer from Southern Ostrobothnia, Finland who was active in the Lapua Movement in the early 1930s. 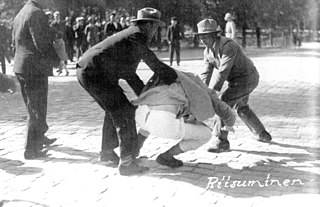 The Vaasa riot took place on 4 June 1930 in Vaasa, Finland. The riot unfolded with a violent attack by radical members of the right wing Lapua Movement on Communist supporters and bystanders at a court house in Vaasa. No intervention was witnessed of the police, as the police stood watching the attack. 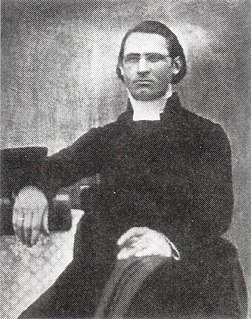 Johan Gabriel (Janne) Ståhlberg was a Finnish priest, who worked as a chaplain in Alavieska and as a deputy pastor in Haapajärvi. He is best known as the father of K. J. Ståhlberg, the first President of the Republic of Finland.