Originally from Ottawa, Ontario, Clermont won a children's poetry contest sponsored by the Ottawa Public Library in 2001, in the ages 12–14 division. [3] After completing high school, she travelled throughout Canada and the United States before settling in Montreal in 2012. [2] 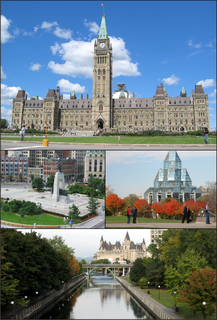 The Ottawa Public Library is the library system of Ottawa, Ontario, Canada. The library was founded in 1906 with a donation from the Carnegie Foundation.

Le jeu de la musique won the Prix de l'Œuvre de la relève from the Conseil des arts et des lettres du Québec [4] and the Prix Adrienne-Choquette [5] in 2018. It was a competing title in the 2018 edition of Le Combat des livres , where it was defended by comedian Philippe-Audrey Larrue-St-Jacques. [6]

The Conseil des arts et des lettres du Québec (CALQ) is a public agency founded in 1994 by the government of Quebec.

Marjolène Morin, professionally known as Marjo, is a Canadian singer-songwriter from Quebec.

Nicolas Dickner is a Canadian novelist and short story writer. He is best known for his 2005 novel Nikolski, which has won numerous literary awards in Canada both in its original French and translated English editions.

Jocelyne Saucier is a Canadian novelist and journalist based in Quebec.

Diane-Monique Daviau is a Quebec educator, writer, translator and journalist.

Esther Croft is a Quebec educator and writer.

Marie Laberge is a Quebec actress, educator and writer.

Adrienne Choquette was a writer in Quebec, Canada.

Catherine Leroux is a Canadian novelist who writes usually in French.

Nathalie Léger is the Executive Director of the IMEC.

Julie Mazzieri is a Canadian novelist and translator who currently lives in Corsica. She is most noted for her novel Le discours sur la tombe de l'idiot, which won the Governor General's Award for French-language fiction at the 2009 Governor General's Awards. The novel was also a finalist for the Prix Orange du livre and the Prix littéraire des collégiens.

Agnès Gruda is a Polish-born Canadian journalist and fiction writer. A foreign correspondent for La Presse, she won a National Newspaper Award in 2014 for her reporting on the Salafi movement.

Geneviève Rioux is a Québécoise television host and actor in theatre, television and film.

Hélène Pedneault was a Québécoise writer of many mediums who contributed much to the advancement of the feminist cause and also to Quebec sovereignty and the environment.

Philippe Brach is the stage name of Philippe Bouchard, a Canadian singer-songwriter from Saguenay, Quebec.

Éric Dupont is a Canadian writer from Quebec. His 2006 novel La Logeuse was the winner of the 2008 edition of Le Combat des livres, and his 2012 novel La fiancée américaine was a competing title in the 2013 edition of the program; the latter novel's English translation, Songs for the Cold of Heart, was shortlisted for the 2018 Scotiabank Giller Prize.