St Anselm Hall, known colloquially as Slems, is a traditional University of Manchester hall of residence situated in Victoria Park.

It was founded in 1907 by Rev. Thomas B. Allworthy on behalf of the Church of England for the theological training of male students. The Hall was later licensed by the University of Manchester as an official hall of residence in 1954, extending the capacity of students from 70 to its current 130. [1]

Two former members of the Hall are Nobel Prize recipients.

St. Anselm Hall was founded by Rev. T.B. Allworthy as Saint Anselm’s Hostel in 1907. After the establishment of a theology department at Manchester University in 1903, Allworthy, with the encouragement of Edward Hudson of Rossall School, was prompted to consider the foundation of a place of residence for working-class men who were studying for holy orders. [2] The idea for the foundation was said to have occurred to Allworthy under a willow tree in Brookdale Park where he had been reading The Life of Saint Anselm with Hudson in the Summer of 1907. [3]

An announcement was made in September 1907 of the opening of a hostel ‘for free training and preparation with maintenance, of candidates for Holy Orders’ at 105 Droylsden Road with places available for eight students. [3] Allworthy served as the first Warden and St Anselm’s began to function as a place of theological study. As the Hostel grew, a new site at Kent House, the former home of physicist Arthur Schuster was secured for the students and Warden to move to in 1914 by Edmund Knox, Bishop of Manchester. [3] This is where St. Anselm Hall remains.

After its official re-opening on the 14th of November 1914, St. Anselm’s Hostel was renamed St. Anselm’s Hall (the apostrophe was finally removed in 1933). [4] During the first decade at its new site at Kent House, the Hall merged with Gartness Hall, an institution associated with Thomas Brassey, 1st Earl Brassey which also provided accommodation for Anglican ordinands. [3]

St. Anselm Hall was funded by the Church of England’s Central Board of Finance until 1933 when the Hall became financially independent. The first half of the 20th century saw growing autonomy in the running of the Hall including the institution in 1922 of a formally-organised Junior Common Room committee. [4]

From 1928-1933 under the fifth Warden The Revd. Canon Duncan Armytage, later Canon of the Ninth Stall at Windsor Castle, St. Anselm Hall underwent a period of development including the institution of the Senior Common Room made up of academics from the University, the growth of the library, and establishment of a number of societies and events which still exist today. [4]

The Hall remained open during World War II and housed a number of men from the Armed Forces who were undertaking short training courses at the University. [5] Applications to the St. Anselm Hall fell immediately after the War and it was proposed that it should become an Anglican theological college. Instead of this, the decision was taken to transfer ownership to the university on the 1st of August 1956 under the eighth Warden The Revd. Canon Ronald Preston. [4]

Despite still maintaining strong links with the Church of England, this transferal was significant in reshaping the ethos of the Hall away from being a solely Anglican institution since the former statutory appointment of a cleric to the position of Warden was repealed. From 1956 onward Wardens have been both theologians and academics in other fields and the admissions process was broadened to accept residents from all academic fields. The still-functioning St. Anselm Hall Committee was from this point charged with the running of Hall. [4]

A major building project took place in 1961 which saw two new accommodation wings, Manor and Summerfield, being built next to Kent House and the 1927 Dewar Wing to form a quad, along with a dining hall and new chapel, all of which are still in use today. This expanded the Hall’s capacity to around 140 residents. [4]

A number of partnerships with nearby halls were formed in the latter half of the 20th century, namely with Ashburne Hall and St. Gabriel’s Hall which were both all-female institutions at the time. In 1992 a new self-catering hall Canterbury Court opened opposite St. Anselm Hall and the two halls have since maintained a close partnership. [4]

In 2016 decision was made to accept female students. By this point St. Anselm Hall was the last remaining all-male university-owned hall of residence in the United Kingdom. The first female residents arrived in September 2016 and almost half of the Hall’s residents are now female. [6]

St Anselm Hall is situated on Kent Road East, and occupies the southern side of the road entirely with its buildings. These are the main building, the chapel, an onsite gym, and the Warden's lodge.

The main building can, again, be subdivided into the dining hall, the on-site bar and the residential wings, each with individual names. Schuster (formerly known as Kent Hall) is the main part of the hall, and formerly the property of the exceptional mathematical physicist Arthur Schuster. As well as housing numerous students, it also contains the hall's own library and the Junior and Senior Common Rooms. The first extension to take place was the Dewar wing, named after the 4th Warden of the Hall Revd. Canon Dewar (1922-1927), which took place in 1927. Manor and Summerfield are the two newest wings, both being built as part of the extensions to the hall carried out by the university in the 1960s. [7]

The Chapel lies behind the Main building, and stands as a monument to the religious tradition at St Anselm Hall. Every year, one student is elected as a Sacristan in order to better integrate the Chaplaincy and the student body.

The Warden's Lodge is a detached house in the hall grounds built for 8th Warden Revd. Canon Prof. Preston (1948-1963), though now it houses postgraduate students.

St Anselm Hall is one of the last remaining halls to partake in a formal dinner, otherwise known as Formal Hall, which takes place every weekday during term time. It is mandatory for all members of the hall to wear gowns to dinner, tutors and students alike.

Proceedings start with all students entering the dining hall, after the doors have been opened by the catering staff. Once everyone is stood behind their seats, the JCR president makes any announcements and once completed, instructs the student closest to the entrance to bang the serving spoon, which is done three times. This signifies to the warden and tutors that they are to enter, which they do upon hearing this. They make their way to the top table, and the warden then gives the hall grace, and dinner may start. Upon finishing, the warden arises, at which point everyone else also stands, and leaves, thus signifying the end of dinner, meaning everyone may now leave.

After Christmas dinner Floreat Aula Sanctus Anselmi (May St. Anselm Hall flourish) is traditionally toasted, alongside "The Queen, the Duke of Lancaster".

The Cellar Club is the onsite bar, and is the self-titled cheapest bar in Manchester. This is mostly due to the fact that the bar is one of the last student-run bars in Manchester, and the staff are residents within the hall who volunteer their time there. Originally located within the snooker room in the open Junior Common Room, it was relocated under the dining hall and expanded under Warden Smalley in the 1970s. The bar was renovated again in the 1990s to allow for a greater variety of socials.

These socials are organised by an elected representative within the hall. The events range from bar crawls to in-house events. There is also a weekly pub quiz run by students.

The Warden has responsibility over the welfare all of the residents in St Anselm Hall and is point of contact between students and the University.

A dormitory is a building primarily providing sleeping and residential quarters for large numbers of people such as boarding school, high school, college or university students. In some countries, it can also refer to a room containing several beds accommodating people.

This is a list of halls of residence on the various campuses of the University of Nottingham in Nottingham, England.

The Madras Christian College (MCC) is an arts and sciences college based in Madras (Chennai), Tamil Nadu, India. Consistently ranked among the top ten colleges in India, it is considered to be one of the most prestigious colleges in India. Founded in 1837, MCC is one of Asia's oldest extant colleges. The college is affiliated to the University of Madras but functions as an autonomous institution from its main campus in Tambaram, Chennai.

Connaught Hall is a fully catered hall of residence owned by the University of London and situated on Tavistock Square, Bloomsbury, London, UK. It is an intercollegiate hall, and as such provides accommodation for full-time students at constituent colleges and institutions of the University of London, including King's College, University College London (UCL), Queen Mary, the London School of Economics (LSE) and the School of Oriental and African Studies and others.

Wills Hall is one of more than twenty halls of residence in the University of Bristol. It is located high on the Stoke Bishop site on the edge of the Bristol Downs, and houses c. 370 students in two quadrangles. Almost all of these students are in their first year of study.

St. John’s College is an Anglican college affiliated to the University of Hong Kong, which provides accommodation to undergraduates and postgraduates. As the successor of St. John’s Hall, which was founded in 1912, the College is the oldest residential hall/college of the University. Constitutionally, the College is a body corporate established by statute, the St. John’s College Ordinance, on 27 April 1956. As such, unlike other residential halls/colleges that are directly administered by the University, the College enjoys financial and administrative independence. The Ricci Hall, run by the Jesuits, is the only other non-University-administered hall.

This page describes residential halls, colleges and residences at the University of Hong Kong (HKU). 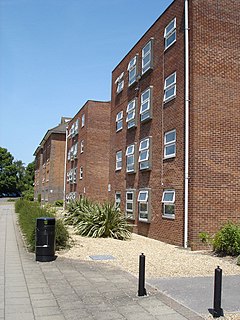 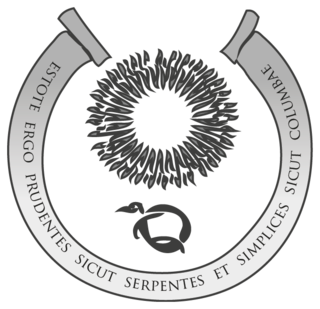 Manor Hall is a student hall of residence at the University of Bristol. Situated in the Georgian/Victorian suburb of Clifton, Bristol, it provides self-catering accommodation for around 340 residents, both in the main hall itself and also in a number of nearby surrounding annexes. The majority of residents are first year undergraduate students, but a number of 'returners' choose to stay on to contribute to the hall's life and community in subsequent years of study.

Ferens Hall is a former hall of residence on a complex known as "The Lawns" for the University of Hull, England The motto engraved on the Ferens Hall Shields is "Ferendo non Feriendo". Prior to its closure in 2018, it was the original hall on The Lawns site.

St Salvator's Hall is a student Hall of residence at the University of St Andrews. It lies close to the quadrangle of the United College, St Andrews and St Salvator's Chapel, a foundation which was endowed by King James II of Scotland. The Hall is in an area between North Street and The Scores. Architecturally, it has been described as a "rambling Gothic dormitory". 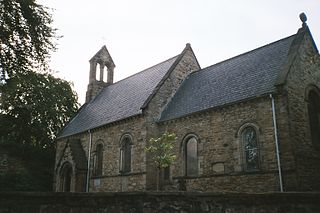 St Chad's Hostel, in Hooton Pagnell near Doncaster, was a hostel to prepare candidates for theological college. It was opened in 1902 by Frederick Samuel Willoughby, vicar of Hooton Pagnell. In 1904 a sister institution, St Chad's Hall, was opened at the University of Durham.