St Salvator's College was a college of the University of St Andrews in St Andrews, Scotland. Founded in 1450, it is the oldest of the university's colleges. In 1747 it merged with St Leonard's College to form United College.

St Salvator's College was founded in 1450 by James Kennedy, Bishop of St Andrews. King James II of Scotland had provided an endowment at the college's foundation and this allowed the training of ten students. Several of the original medieval buildings survive, including the college chapel, tower, tenement building (adjoining to the west of tower, actually older than the adjoining tower, but much restored) and the Hebdomadar's building.

The dramatic west tower was built in the 1460s with the upper part of the spire being remodelled in 1851 by the Edinburgh architect Robert Matheson. [1]

In 1528, the Protestant martyr, Patrick Hamilton, was burned alive outside the college, though Hamilton himself was a member of St Leonard's college.

Initially a college of Theology and the Arts, St Salvator's was created to revitalize and focus the university after its somewhat disorderly foundation.

Due to financial considerations, fall in student numbers and general decline of the university, St Salvator's and St Leonard's Colleges amalgamated into the United College of Saint Salvator and Saint Leonard in 1747. Shortly after this, the initial site of St Leonard's College was sold, though the university retained ownership of St Leonard's College Chapel. Although the buildings of St Salvator's College (including the college chapel) were grand by medieval standards, they eventually fell into disrepair. From 1837 the quadrangle was rebuilt and extended into its current form, with a north and a west wing in Jacobean style (in similar style to Madras College on South Street built at the same time). To the south is the Chapel, where many university services are held.

St Salvator's College was residential until the unification with St Leonard's. The current St Salvator's Hall (built from the 1930s), which lies east of the college, is one of the halls of residence for students.

Today, with the university having abandoned the Collegiate system in all but name, the St Salvator's/United College site houses various lecture theatres, and the departments of Spanish, Russian, and social anthropology. It is commonly referred to as “the quad”, and is the setting of Raisin Monday festivities, the finish point of the post-Graduation processions, and occasionally hosts student events. 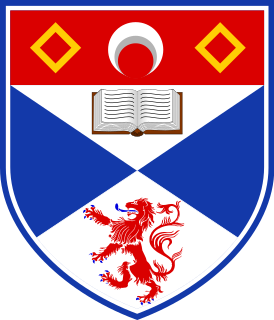 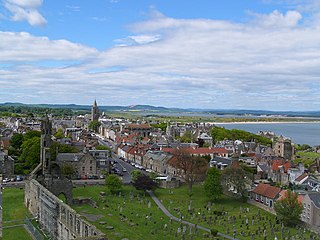 St Andrews is a town on the east coast of Fife in Scotland, 10 miles southeast of Dundee and 30 miles northeast of Edinburgh. St Andrews had a recorded population of 16,800 as of 2011, making it Fife's fourth-largest settlement and 45th most populous settlement in Scotland. 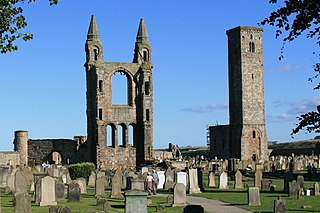 The Cathedral of St Andrew is a ruined cathedral in St Andrews, Fife, Scotland. It was built in 1158 and became the centre of the Medieval Catholic Church in Scotland as the seat of the Archdiocese of St Andrews and the Bishops and Archbishops of St Andrews. It fell into disuse and ruin after Catholic mass was outlawed during the 16th-century Scottish Reformation. It is currently a monument in the custody of Historic Environment Scotland. The ruins indicate that the building was approximately 119 m (390 ft) long, and is the largest church to have been built in Scotland.

The Palace of Monimail, also known as Monimail Tower, was a Renaissance palace in Fife, Scotland. A residence of the Archbishops of St Andrews from the 13th century, in the early 17th century Monimail became a chief seat of the Melville family. Lord Monimail is one of the subsidiary titles of the Leslie-Melville Earls of Leven. It was abandoned in the late 17th century and subsequently most of the palace was demolished. One tower remains standing in the grounds of Melville House near the village of Monimail, 4 kilometres (2.5 mi) north of Ladybank.

St Salvator's Chapel is one of two collegiate chapels belonging to the University of St Andrews, the other being St Leonard's Chapel, situated in the grounds of the adjacent St Leonard's School. The chapel was founded in 1450, by Bishop James Kennedy, built in the Late Gothic architectural style, and refurbished in the 1680s, 1860s and throughout the 20th century. It is currently the chapel of the United college as well as being the major university chapel. 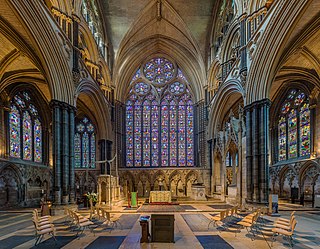 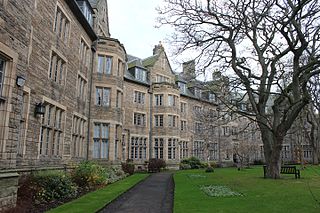 St Salvator's Hall is a student hall of residence at the University of St Andrews. It lies close to the quadrangle of the United College, St Andrews and St Salvator's Chapel, a foundation which was endowed by King James II of Scotland. The Hall is in an area between North Street and The Scores. Architecturally, it has been described as a "rambling Gothic dormitory".

Dirleton Kirk is a church in the village of Dirleton, in East Lothian, Scotland. 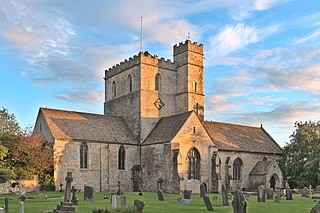 Leonard Stanley Priory was a priory in Gloucestershire, England. Over the years following the dissolution most of the buildings of the priory complex have been destroyed.

Gillis Centre, formerly Gillis College and founded as St Margaret's Convent and School, is a complex of buildings situated close to the city centre of Edinburgh, Scotland. The history of the site can be traced back to the 15th century. The original building housed many literary figures of the eighteenth century, from 1834 it served as a convent and from 1986 to 1993 it was Gillis College, the seminary for the Roman Catholic Church in Scotland. It currently provides offices for the Curia of the Archdiocese of St Andrews and Edinburgh. 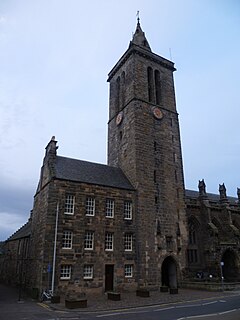 Education in Medieval Scotland includes all forms of education within the modern borders of Scotland, between the departure of the Romans from Britain in the fifth century, until the establishment of the Renaissance late fifteenth century and early sixteenth century. Few sources on Scottish education survived the Medieval era. In the early Middle Ages, Scotland was an oral society, with verbal rather than literary education. Though there are indications of a Gaelic education system similar to that of Ireland, few details are known. The establishment of Christianity from the sixth century brought Latin to Scotland as a scholarly and written language. Monasteries served as major repositories of knowledge and education, often running schools.

Matthew Edward Habershon, known as Edward Habershon, was an architect practising in London and south-east England. He specialised in neo-gothic buildings, especially churches and chapels. With his brother W.G. Habershon he designed St John the Baptist's Church, Hove, now a Grade II building. With E.P.L. Brock he designed a number of churches including St Leonards-on-Sea Congregational Church, also listed at Grade II. He designed St Andrews church in Hastings, where Robert Tressell's large mural was created. In 1862 he was involved in the relocation of London's burial grounds, moving more than one thousand hundredweight of human remains.

Corstorphine Old Parish Church, formerly St. John's Collegiate Church, is at the old centre of Corstorphine, a village incorporated to the west area of Edinburgh. Built in the 15th century, in the churchyard of a 12th-century or earlier chapel, the former collegiate church was listed category A by Historic Scotland on December 14, 1970.