The Staatskapelle Dresden (known formally as the Sächsische Staatskapelle Dresden) is a German orchestra based in Dresden, the capital of Saxony. Founded in 1548 by Maurice, Elector of Saxony, it is one of the world's oldest and most highly regarded orchestras. Its precursor ensemble was Die Kurfürstlich-Sächsische und Königlich-Polnische Kapelle (The Electoral Saxon and Royal Polish Orchestra). The orchestra is the musical body of the Staatsoper Dresden (Dresden State Opera). The venue of the orchestra is the Semperoper.

Heinrich Schütz was associated with the orchestra early in its existence. In the nineteenth century, Carl Maria von Weber and Richard Wagner each served as Hofkapellmeister of the orchestra.

In the twentieth century, Richard Strauss became closely associated with the orchestra as both conductor and composer, which premiered several of his works. Karl Böhm and Hans Vonk were notable among the orchestra's chief conductors in that they served as chief conductors of both the Sächsische Staatskapelle Dresden and the State Opera simultaneously. Herbert Blomstedt was musical director of the Staatskapelle from 1975 to 1985, and now has the title of Ehrendirigent (honorary conductor) with the orchestra.

Sir Colin Davis held the title of 'conductor laureate' from 1990 until his death in 2013, the first and only to-date conductor to be granted this title by the orchestra. [7] The orchestra named Myung-Whun Chung as its first-ever principal guest conductor, effective as of the 2012–2013 season. [8]

In April 2007, the European Cultural Foundation awarded the orchestra a prize "zur Bewahrung des musikalischen Weltkulturerbes" (for preservation of the world's musical heritage"). In June 2011, the orchestra was announced as the new resident orchestra of the Salzburg Easter Festival, as of 2013. [8]

Kapellmeister from German Kapelle (chapel) and Meister (master), literally "master of the chapel choir" designates the leader of an ensemble of musicians. Originally used to refer to somebody in charge of music in a chapel, the term has evolved considerably in its meaning and is today used for denoting the leader of a musical ensemble, often smaller ones used for TV, radio, and theatres. 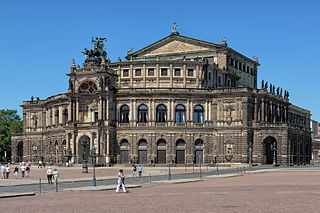 The Semperoper is the opera house of the Sächsische Staatsoper Dresden and the concert hall of the Staatskapelle Dresden. It is also home to the Semperoper Ballett. The building is located on the Theaterplatz near the Elbe River in the historic centre of Dresden, Germany.

Marjana Lipovšek is a Slovenian opera and concert singer (mezzo-soprano). The daughter of composer Marijan Lipovšek, she was born in Ljubljana, Slovenia. She retired in 2017 and now lives in her family house in Ljubljana.

The Staatskapelle Berlin is a German orchestra and the resident orchestra of the Berlin State Opera, Unter den Linden. The orchestra is one of the oldest in the world. Until the fall of the German Empire in 1918 the orchestra's name was Königliche Kapelle, i.e. Royal Orchestra. 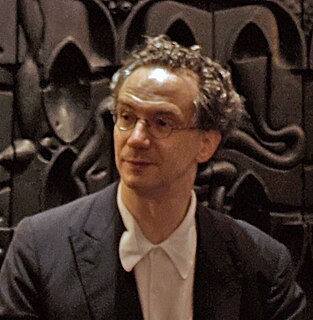 The Badische Staatskapelle is a symphony orchestra based in Karlsruhe. The orchestra is affiliated with the Badisches Staatstheater. The historical roots of the orchestra date back to 1662. The precursor ensemble was the Hofkapelle der Markgrafen von Baden-Durlach. Early leaders of the orchestra included Giuseppe Beniventi (1712–1718), Casimir Schweizelsberger, Johann Philipp Käfer, and Johann Melchior Molter, who led the orchestra for 40 years.

The Salzburg Easter Festival is an annual festival of opera and classical music held in Salzburg, Austria during Easter week.

Erwartung (Expectation), Op. 17, is a one-act monodrama in four scenes by Arnold Schoenberg to a libretto by Marie Pappenheim. Composed in 1909, it was not premiered until 6 June 1924 in Prague conducted by Alexander Zemlinsky with Marie Gutheil-Schoder as the soprano. The opera takes the unusual form of a monologue for solo soprano accompanied by a large orchestra. In performance, it lasts for about half an hour. It is sometimes paired with Béla Bartók's opera Bluebeard's Castle (1911), as the two works were roughly contemporary and share similar psychological themes. Schoenberg's succinct description of Erwartung was as follows:

In Erwartung the aim is to represent in slow motion everything that occurs during a single second of maximum spiritual excitement, stretching it out to half an hour. 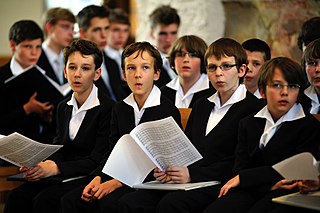 The Dresdner Kreuzchor is the boys' choir of the Kreuzkirche in Dresden, Germany. It has a seven-century history and a world-wide reputation. Today, the choir has about 150 members between the ages of 9 and 19, from Dresden and the surrounding region. The boys attend the Kreuzschule in Dresden. They are also called "Kruzianer".

The Hochschule für Musik Carl Maria von Weber is a college of music in Dresden, Germany.

Rebecca Saunders is a London-born composer who lives and works freelance in Berlin. In a 2017 Classic Voice poll of the greatest works of art music since 2000, Saunders' compositions received the third highest total number of votes (30), surpassed only by the works of Georg Friedrich Haas (49) and Simon Steen-Andersen (35). In 2019, writers of The Guardian ranked Skin (2016) the 16th greatest work of art music since 2000, with Tom Service writing that "Saunders burrows into the interior world of the instruments, and inside the grain of Fraser's voice [...] and finds a revelatory world of heightened feeling."

Simone Schröder is a German contralto in opera and concert, and an academic teacher. She has been associated with the Bayreuth Festival from her student days in 1992, performing in three different productions of Parsifal. She has appeared regularly at the Staatsoper Berlin and the Semperoper, and appeared as a guest at opera houses including La Scala in Milan, New National Theatre Tokyo and Teatro Colón in Buenos Aires.

Annette Jahns was a German operatic mezzo-soprano and contralto, and opera director, based at the Semperoper in Dresden. She appeared at international opera houses and festivals, with a focus on contemporary music including world premieres. She taught at the Hochschule für Musik Carl Maria von Weber Dresden.

Lenka Matějáková is a Czech violinist.

Kurt Emil Striegler was a German composer and director.

Giedrė Šlekytė is a Lithuanian conductor, who works in Europe with a focus on opera. After she was one of three conductors for the Young Conductor Award of the Salzburg Festival in 2015, she worked at the Stadttheater Klagenfurt for two seasons. She conducted Schreker's Die Gezeichneten at the Opernhaus Zürich, and Poulenc's Dialogues des Carmélites at the Oper Frankfurt in 2021.