Stamatis Kraounakis (Greek : Σταμάτης Κραουνάκης) is a Greek music composer, music producer, lyricist, writer and director. He was born and lives in Athens and has studied Political Science in Panteion University. He has composed music for more than 40 albums and 50 theatre plays.

In Panteion University Kraounakis met the poet Lina Nikolakopoulou, with whom he produced more than 80% of his work. In October 1985 they created and released the album Kikloforo Ki Oploforo with Alkistis Protopsalti as leading singer.

In 1997 he accepted the position of artistic director at the Municipal Theater of the city of Kavala, where he directed three significant productions - Ktistes by Giorgos Chimonas, Gro Plan by Giorgos Maniotis, and Aristophanes' Plutus under the direction of Nikos Mastorakis.

In 1998, Kraounakis directed a group of young actors called Speira Speira, which successfully performed the All in Black and a Piano show from October 1999 to April 2001.

During 2004 Stamatis Kraounakis composed the music for Delivery, as well as music for Aristophanes' Ploutos for the Athens Festival in Epidavros. In May 2004 he was invited by the Royal Academy of Dramatic Art in London to compose music for the project "Installation 496". [1]

He has written the theme song for one of the most popular TV series in Greece, Maria, i Aschimi , the Greek version of Ugly Betty .

In 2010 he voiced Louis the alligator in the Greek language version of The Princess and the Frog.

Nikos "Nikko" Patrelakis was born in Athens, Greece. He studied music in the National Conservatory and mathematics in the University of Athens. 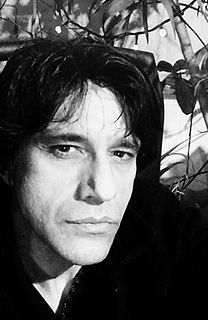 Alexis Stamatis is a Greek novelist, playwright and poet. Amongst other work, he has published sixteen novels, six books of poetry and a number of plays. As of 2011, he teaches creative writing at the Hellenic American Academic Foundation.

Nikos Xanthoulis is a Greek composer and author. He is currently Artistic Consultant with the Greek National Opera, Assistant Researcher at the Academy of Athens (2009–present), Correspondent Member of the Archaeological Institute of America (2010–present), and Professor of Composition (2004–present) and Trumpet (1984-2013) at the Athens Conservatory. He was Artistic Director of the Public Broadcasting Orchestras and Choir (2014-2015), and Principal Trumpet Player with the Greek National Opera (1983-2007).

Giorgos Mazonakis is a modern Laika and pop Greek singer.

Katerina "Katy" Garbi is a Greek singer active in Greece and Cyprus, with some popularity in Turkey. Her career has spanned over 30 years with over 1.5 million records sold in Greece and abroad. Garbi's discography is marked by several multi-platinum releases, including Arhizo Polemo (1996) and Evaisthisies (1997), two of the best-selling albums of the decade. Garbi represented Greece in the annual Eurovision Song Contest in 1993 with the song "Ellada, Hora Tou Fotos", taking ninth place. She later struck her biggest commercial success with To Kati (2000) in terms of unit sales. Over the years, Garbi has won 11 Pop Corn Music Awards, including three for Album of the Year, and one Arion Music Award. On 14 March 2010, Alpha TV ranked her among the top-certified female artists in Greece's phonographic era, at 8th place.

Heaven Music is an independent record label in Athens, Greece, founded in 2001 by ANT1 Group. It is known for signing new and young artists.

Polina Paraskevi Misailidou is a Greek singer, who is better known in her own country simply as Polina.

The X Factor is the Greek version of The X Factor, a show originating in the United Kingdom. It is a television music talent show contested by aspiring pop singers drawn from public auditions.

Evangelia (Lina) Nikolakopoulou is widely recognised as one of the foremost lyricists in Greece. She was born in Methana on 30 June 1958 and studied social and political sciences at the Panteion University in Athens. This is where she met the composer Stamatis Kraounakis, with whom she has made several records. Kukloforo kai Oploforo by Alkistis Protopsalti, Mama Gernao by Tania Tsanaklidou, Meno Ektos by Eleftheria Arvanitaki, Kratai chronia afti i kolognia (1990) composed by Thanos Mikroutsikos and sung by Haris Alexiou, Di Efchon (1992) composed by Nikos Antypas and sung by Haris Alexiou and many others are only some of the records that she has participated in.

Yannis Markopoulos is a Greek composer.

Giorgos Karadimos is a musician from Greece. A composer and lyricist, he was nominated for the Eurovision Song Contest in 2010. 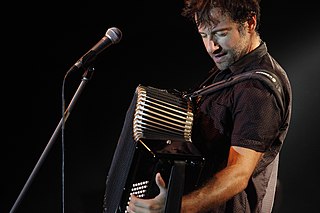 Kostis Maraveyas or Kostis Maravegias, also known by his stage name Maraveyas ilegál or just Maraveyas, is a Greek singer-songwriter, composer, performer, director, TV presenter and writer. He plays the accordion, piano, guitar, hammond, farfisa and he sings in Greek, English, Spanish and Italian. Although he began his musical career in the underground and alternative music scene of Italy and Greece, as of 2015 Maraveyas has reached wider audiences and is considered as a well known songwriter-performer in Greece.

Eleni Tsaligopoulou is a Greek singer of artistic and popular music who, in the course of a 30-year career, has maintained a position as one of her country's best-selling recording artists. 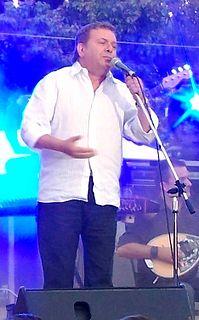 Manos Eleftheriou, was a Greek poet, lyricist and prose writer. He had written poetry collections, short stories, a novella, two novels and more than 400 songs. At the same time he worked as a columnist, publishing editor, illustrator and radio producer. 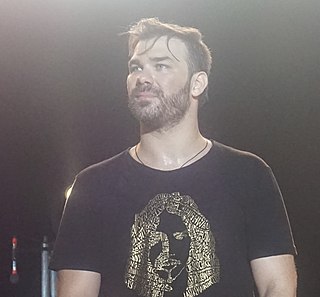 Giorgos Sabanis is a Greek singer-songwriter and athlete. He was the runner in the segment honouring of all previous Olympiads, at the 2004 Summer Olympics opening ceremony. Giorgos Sabanis is an athletics national champion at 100 m, with 14 Pan-Hellenic gold medals and other individual distinctions. After leaving his career as an athlete, he became one of the most famous Greek performers.

Korina Legaki is a Greek singer born in Herakleion, Crete, of Greek-Swedish origin. She trained in classical and jazz singing, piano and orthophony, and participated in Spyros Sakkas’s Vocal Art Workshop. A multilingual and multicultural persona, she has recorded five solo records with original material as well as covers of Greek and foreign composers. She has recorded and performed with musicians, composers, singers and ensembles across several genres from free jazz to traditional and from academic to ethnic. She has sung in theaters, concert halls and various venues throughout Greece and abroad, including the Odeon of Herodes Atticus, the Athens Concert Hall, the Zappeion, the temple of Poseidon in Sounio, the Anglican Church of St. Paul’s and the European Parliament. At the same time, she has undertaken significant volunteering work, joining forces on stage and in studios with refugee children.