Stan Zemanek (29 May 1947 – 12 July 2007) [1] was an Australian radio broadcaster, television presenter, radio producer and author who presented a popular night-time show on The Macquarie Network station 2UE in Sydney and which was networked across parts of Australia via Southern Cross.

He was known for his forthright, generally right-wing [2] views and for trading abusive remarks with some of his callers. He was also the 13th and longest-serving "Beast" on the popular panel TV talk show, Beauty and the Beast .

Zemanek was born and raised in Sydney, New South Wales, but began working in radio as a researcher for Radio C-Fun 141 in Vancouver, British Columbia, Canada. He worked as a producer on the John Laws program in Australia starting in 1978, before returning to North America for some years, where he covered the 1983 America's Cup. He spent a decade presenting on 2UE late at night beginning in 1987. He spent a year in 2000 presenting the 2GB morning shift. [3] [4] [5] Zemanek moved to Melbourne for a short stint with 3AW's drive program in 2002 before moving back to Sydney and 2UE in 2003, having failed to garner ratings, and publicly falling out with several members of the 3AW's broadcast team. [6] [7]

While popular with much of his audience, Stan often boasted about being the most complained-about broadcaster in the country, polarising opinions of those who did not agree with his right-wing beliefs. He was not shy to admit that he was politically biased and often criticised "idiot Labor voters" for not doing the same. His most commonly used terms were "numb nuts", "turn it up", "half-wit", "oxygen thief", "left-wing looney", "give yourself an uppercut" and "typical Labor voter"; and he once asked a caller who sounded to be a little slow 'are you smoking the wacky-tobacky', a slang reference to marijuana. [8]

In 2003, following his return to 2UE, he received a bombardment of calls from a number of people he referred to as 'The Phone Box Boys', thinking they were all calling him from a phone box. The calls would sometimes reach 20 a night, and would spin several staples of Zemanek such as sound effects, on Stan himself. This led to an enormous spike in his ratings for the period of March–July 2003.

Zemanek had an ongoing rivalry with fellow 2UE colleague and breakfast host Mike Carlton, ever since Carlton revealed on-air that Zemanek was about to move to 2GB. An angry Zemanek called for Carlton to be sacked and for the Australian Broadcasting Authority to investigate him for "irresponsible journalism". The "debate" between the two broadcasters degenerated over the next few days, with Carlton calling Zemanek "a little shit", "a village idiot", and "a stunted runt" and Zemanek calling Carlton "a turd" and "a ponce" with "his head up his backside". [9] After Zemanek's death, Carlton stated on his breakfast show at 2UE that he hated Zemanek and would only attend his funeral to check that he was really dead, causing 2UE management to publicly denounce Carlton. Carlton made his comment while showbiz reporter Peter Ford was doing a report on Zemanek's funeral. At the time Ford made light of Carlton's comments. On reflection, however, he was disgusted and blasted Carlton on 2UE that day. Ford explained that Zemanek was a mentor and friend and that he was disgusted with what Carlton had said. Ford resigned from his spot on Carlton's program (but continues to report for other 2UE programs). [10]

Stan and his wife, Marcella Zemanek, had two daughters, Gaby and Melissa, and two grandchildren at the time of his death. [11] Being a Sydneysider, he supported the Manly Warringah Sea Eagles in the NRL, before moving to Melbourne (where Australian rules football is the dominant football code), where he elected to support the Carlton Football Club. [12]

Zemanek was diagnosed with glioblastoma multiforme, [13] an aggressive brain tumour that is almost universally fatal within a few years, in May 2006. [14] Treatment included chemotherapy and radiotherapy in addition to surgery performed by Charles Teo. [13] After rumours in 2006, Zemanek's retirement, and intention to look after his health and spend time with his family, was announced on 9 December 2006. [14] His final show went to air on 22 December 2006. [15] Many in the commercial radio industry paid tribute to Zemanek on-air, including his former on-air colleagues and, later, rivals (on 2GB), Alan Jones and Ray Hadley.

A shock jock is a type of radio broadcaster or disc jockey who entertains listeners or attracts attention using humor and/or melodramatic exaggeration that some portion of the listening audience may find offensive. The term is usually used pejoratively to describe provocative or irreverent broadcasters whose mannerisms, statements and actions are typically offensive to many members of the community. It is a popular term, generally used within the radio industry. A shock jock is considered to be the radio equivalent of the tabloid newspaper, for which entertaining readers is as important as, or more important than, providing factual information. Within the radio industry, a radio station that relies primarily on shock jocks for its programming is said to have a hot talk format.

The cash for comment affair was an Australian scandal that broke in 1999 concerning paid advertising in radio that was presented to the audience in such a way as to sound like editorial commentary. John Laws, a shock jock radio presenter for Sydney talk back, was accused of misusing his authority as an announcer. While the initial publicity had died down by the end of the year, it sparked major changes in the way the radio industry is conducted in Australia. This resulted in a second scandal in 2004, leading to the resignation of Australian Broadcasting Authority head David Flint, after he had been found to have been less than impartial in his role in original "cash for comment" investigations.

Richard John Sinclair Laws, CBE, also known as Lawsie, was from the 1970s until his retirement in 2007, the host of an Australian morning radio program combining music with interviews, opinion, live advertising readings and listener talkback. His distinctive voice earned him the nickname "the Golden Tonsils". 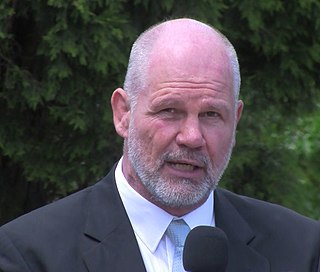 Peter John FitzSimons is an Australian author, journalist, radio and television presenter. He is a former national representative rugby union player and has been the chair of the Australian Republic Movement since 2015.

Christopher Thornton "Chris" Taylor is an Australian comedy writer, performer and broadcaster from Sydney. As a member of The Chaser, he is best known for co-writing and appearing on satirical ABC Television shows CNNNN (2002–2003) and The Chaser's War on Everything. He formerly co-hosted the drive radio show Today Today (2004–05) on Triple J with fellow Chaser member Craig Reucassel, and in 2007, he wrote the musical comedy Dead Caesar. Taylor also hosted the mini documentary series 'Australia's Heritage: National Treasures'. In 2010, with his Chaser colleague Andrew Hansen, Taylor made a musical comedy series for Triple J titled The Blow Parade, which became the number one podcast in the country, and won the 2010 ARIA Award for Best Comedy Release. In 2019, Taylor was the creator and co-writer of the drama Upright starring Tim Minchin. The series screened to critical acclaim in both Australia and the UK.

Derryn Nigel Hinch is an Australian media personality, politician, actor, journalist and published author, best known for his work on Melbourne radio and television. He served as a Senator for Victoria from 2016 to 2019.

Alan Belford Jones AO is an Australian former radio broadcaster. He is a former coach of the Australia national rugby union team and rugby league coach and administrator. He has worked as a school teacher, a speech writer in the office of the Prime Minister Malcolm Fraser, and in musical theatre. He has a Bachelor of Arts from the University of Queensland, and completed a one-year teaching diploma at Worcester College, Oxford. He has received civil and industry awards.

Beauty and the Beast is an Australian panel television show that has appeared in numerous versions since the early days of Australian television. The first version began in 1963 on the Seven Network with host Eric Baume as the "Beast". Baume was later replaced by presenters including John Laws, Stuart Wagstaff, Noel Ferrier and Rex Mossop. The original "Beauties" included Maggie Tabberer, Dita Cobb, Ena Harwood, Pat Firman, Patricia Lovell, Hazel Phillips, Noeline Brown and Freda Lesslie.

Clive Robertson is an Australian radio and television personality in Sydney who has been heard on both the AM and FM bands for over forty years. 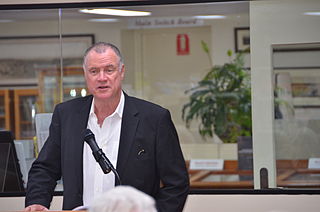 Steven William Price is an Australian radio broadcaster and journalist. He currently appears regularly on The Project and Triple M. Until 2019, Price worked at Macquarie Media broadcasting on 2GB, 4BC and 3AW. He was previously the program director and breakfast presenter at MTR 1377.

Influence is a 2005 play by David Williamson about a right-wing radio "shock jock". It was inspired by the popularity of such personalities as Stan Zemanek, John Laws and Alan Jones.

Justin Smith is an Australian journalist, broadcaster, writer and producer. He is the host of Macqaurie Weekly, a national radio program on the Macquarie Media network through 2GB Sydney, 3AW Melbourne, 4BC Brisbane and 6PR Perth. He's a columnist with Melbourne newspaper the Herald Sun, and appears on Sunrise.