Last updated December 26, 2022
Bishop of Tainan
In this Chinese name, the family name is Lo.

Archbishop Stanislaus Lo Kuang (Chinese :羅光; pinyin :Luo Guang; 1 January 1911 – 28 February 2004) served as bishop of Tainan from 1961 to 1966, when he was appointed archbishop of Taipei. In 1978, Lo became the president of Fu Jen Catholic University, and was succeeded by Gabriel Chen-Ying Ly. [1]

He was born in Hengyang, China.

Yen Chia-kan, also known as C. K. Yen, was a Kuomintang politician. He succeeded Chiang Kai-shek as President of the Republic of China on 5 April 1975, being sworn in on 6 April 1975, and served out the remainder of Chiang's term until 20 May 1978.

Gallen Lo Ka-leung is a Hong Kong actor and singer who primarily acts in television series. He is sometimes credited as King Gallen or Law Ka-Leung.

Dongyin Township (Tungyin) is an insular rural township which is part of Lienchiang County, Fujian Province, Republic of China (Taiwan). The islands are in the East China Sea off the coast of Fujian Province, China near the cities of Fuzhou (Foochow) and Ningde. The township is known for its natural environment and Eastern Min culture, for the historical Dongyong Lighthouse and for its military importance and history as the northernmost territory of the Republic of China (Taiwan).

Lo Chih-en is a Taiwanese football player. He comes from Atayal tribe. On 17 June 2007, Lo made his debut for Chinese Taipei in the game against Guam of East Asian Cup 2008 preliminary competition, in which he scored 4 goals to help Chinese Taipei's 10-0 victory. His twin brother, Lo Chih-an, is also a footballer. Both of them currently study in National Pingtung University of Education.

Lo Chih-an is a Taiwanese football player who comes from Atayal tribe. Despite still being a high school student, Lo made his debut for Chinese Taipei national football team, together with his brother Lo Chih-en, and assisted the latter's first goal in the game against Guam of East Asian Cup 2008 preliminary competition on 17 June 2007.

Wang ocheonchukguk jeon is a travelogue by Buddhist monk Hyecho, who traveled from Korea to India, in the years 723 - 727/728 CE.

Daqing station is a railway and metro station located in South District, Taichung, Taiwan. It is served by the Taiwan Railways Administration and Taichung Metro. The metro station opened on December 19, 2020.

The Philippine Tong Ho Institute is a Chinese high school in Lucena City, Quezon. It was founded February 14, 1921. It has a small population of students and is a small campus.

The Order of Propitious Clouds is a civilian order of the Republic of China (Taiwan). The center of the medal features a picture of clouds, as a token of auspiciousness. This order was instituted in 1941 and classified into nine ranks. As with other orders, both citizens of the Republic of China and foreigners can be awarded the Order of Propitious Clouds.

Lo Chih-chiang is Taiwanese politician and a member of the Kuomintang (KMT). From 2010 to 2013, he was first the spokesperson and then the Deputy Secretary-General of the ROC Presidential Office. He was elected to the Taipei City Council in 2018. In 2020, at the invitation of KMT chairman Johnny Chiang, he assumed the directorship of the party school, the Institute of Revolutionary Practice.

Man's Heart is a British-Malaysian tragedy silent film about the overseas Chinese community in the tin mining industry. Produced and released in 1928, the film was presented by the Kwong Kwong Motion Picture Company, which was located in Seremban, Negeri Sembilan state. Its film crew and shooting equipment came from the past Nanyang Low Pui-kim's self-made Motion Picture Company in Singapore.

Law Kwok-tai was a football coach and a Republic of China (Taiwan) international footballer, but born and spent his entire playing and coaching career in the British Hong Kong, a colony that geographically located in the southern China. Law retired as a professional footballer in 1976, aged 47. That season he was a player-manager. He coached until the 1990s, at aged 60s. At international level he played for Republic of China (Taiwan) in the Olympics as well as Asian Games and AFC Asian Cup. He also played for Hong Kong League XI in non-official match in Merdeka Tournament, as well as "Hong Kong Chinese" team in another friendly tournament, Ho Ho Cup.

The 2019 Kuomintang presidential primary was held after 22 May 2019 through a series of nationwide opinion polls in order to determine its nominee for the President of the Republic of China in the 2020 presidential election.

The Taichung Commercial Bank Headquarters, also known as Taichung Diamond is an under construction skyscraper located in Taichung's 7th Redevelopment Zone, Xitun District, Taichung, Taiwan. It will be the tallest building in Taichung and the first building to surpass 200 m (660 ft) in Taichung. Designed by Aedas, the architectural height of building is 225 m (738 ft), the floor area is 115,310 m2 (1,241,200 sq ft), and it comprises 38 floors above ground, as well as 10 basement levels. It will be completed in 2023 and will become the headquarter of Taichung Bank as well as housing a luxury hotel. 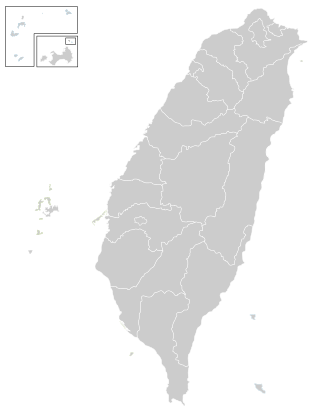 The 16th President and Vice President election of the Republic of China is scheduled to be held in Taiwan in early 2024. Incumbent President Tsai Ing-wen of the Democratic Progressive Party (DPP), who was reelected in 2020, is ineligible to seek a third term. The winner of the 2024 presidential election is scheduled to be inaugurated on 20 May 2024.

The T1 League is a Taiwanese men's professional basketball league founded in 2021. It is the third professional basketball league in Taiwan after the Chinese Basketball Alliance (CBA) and the P. League+ (PLG). In the 2022–23 season, the T1 League consists of six teams, the Kaohsiung Aquas, the New Taipei CTBC DEA, the Taichung Suns, the Tainan TSG GhostHawks, the TaiwanBeer HeroBears, and the Taoyuan Leopards.