Stas (Russian : Стас, Ukrainian : Стас; Polish : Staś, Slovene : Staš) is a reduced form, among many, of the Slavic language given name Stanislav known under several spellings (Ukrainian : Станіслав; Russian : Станислав; Polish : Stanisław; Czech : Stanislav, etc.). It may also serve as a given name of its own. Notable people commonly referred to with the name Stas or variants include:

Nil may refer to: 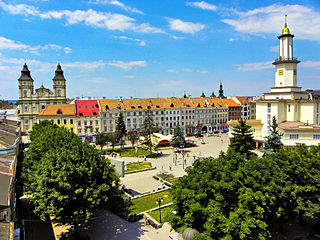 Ivano-Frankivsk is a historic city located in Western Ukraine. It is the administrative centre of Ivano-Frankivsk Oblast. Administratively, it is designated as a city of regional significance within the oblast, and together with a number of rural localities, is incorporated as Ivano-Frankivsk Municipality. Population: 237,686. (2020 est.)

Nadia is a female name, used predominantly throughout the Mediterranean region, Eastern Europe, Latin America, the Caucasus, and the Arab world. Its origins are in the Slavic and Ancient Greek languages. Variations include: Nadja, Nadya, Nadine, Nadiya, and Nadiia.

Natalia is a female given name with the original Late Latin meaning of "Christmas Day". It is currently used in this form in Italian, Romanian, Spanish, Portuguese, Greek, Russian, Ukrainian, Bulgarian and Polish. Other forms and spellings include Natalie/Nathalie, Natálie (Czech), Natália/Nathália, Natalya/Nataliya, Nataliya/Natalya, Nataliia, Natālija (Latvian), Natalija, Natàlia (Catalan) and ნატალია (Georgian).

Given names originating from the Slavic languages are most common in Slavic countries.

Alina is a female given name of European origin. It is particularly common in Central and Eastern Europe. It may be derived from the name Adelina. 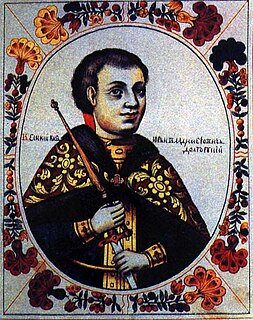 Slávek is male given name. Its origin is the short form of a Slavic names ending in -slav and beginning Slav-. Pronounced slah:vek.

Zakharchenko is a Ukrainian-language surname. Notable people with the surname include:

Stanislav Ivanovych Shcherbatykh was a Ukrainian bard, an author of the Ukrainian anti-communist political satire and other humorous original songs. He is better known for his scenic name of Tryzuby Stas. He is also known as the Ukrainian Vysotskiy.

Stanislav or Stanislaus is a very old given name of Slavic origin, meaning someone who achieves glory or fame. It is common in the Slavic countries of Central and South Eastern Europe. The name has spread to many non-Slavic languages as well, such as French (Stanislas), German, and others.

Stas Baretsky is a Russian musician. He has worked with the groups Leningrad and EU.

Stanislav Vladimirovich Mikhaylov, better known as Stas Mikhaylov is a popular Russian singer and songwriter, Meritorious Artist of the Russian Federation (2010); laureate of the Russian National Music Award and the Golden Gramophone Award. Stas Mikhaylov reported the highest income of all singers in Russia in 2011 with $20 million and 2012 with $21 million

Stas Aleksandrovich Pokatilov is a Kazakh footballer who currently plays for Kairat.

Stas Piekha, formal name Stanislav Piatrasovich Piekha, is a Russian popular singer and actor, and the grandson of Edita Piekha.

Antonina and Antoņina are feminine given names and nicknames. It is a Bulgarian, Latin, Polish, Russian, and Ukrainian given name that is an alternate form of Antonia in use in Israel, Vietnam, Moldova, Bulgaria, Romania, Hungary, Slovakia, Czech Republic, Poland, Ukraine, Belarus, Lithuania, Latvia, Estonia, Georgia, Azerbaijan, Armenia, Russia, Mongolia, Kazakhstan, Kyrgyzstan, Uzbekistan, Turkmenistan, and Tajikistan. It is a Danish, Finnish, German, Italian, Norwegian and Swedish diminutive form of Antonia in use in Greenland, Finland, Norway, Sweden, Denmark, parts of the Republic of Karelia, Germany, Italy, Northern Estonia, Austria, eastern Switzerland, and parts of Romania and Hungary. Antoņina is a Latvian alternate form of Antonia in use in Latvia. Notable people with this name include the following: