Stearin /ˈstɪərɪn/ , or tristearin, or glyceryl tristearate is an odourless, white powder. It is a triglyceride derived from three units of stearic acid. Most triglycerides are derived from at least two and more commonly three different fatty acids. [7] Like other triglycerides, stearin can crystallise in three polymorphs. For stearin, these melt at 54 (α-form), 65, and 72.5 °C (β-form). [3]

Note that stearin is also used to mean the solid component of an oil or fat that can be separated into components that melt at higher (the stearin) and lower (the olein) temperatures. This is the usage meant in an example such as palm stearin.

Stearin is obtained from animal fats created as a byproduct of processing beef. It can also be found in tropical plants such as palm. It can be partially purified by dry fractionation by pressing tallow or other fatty mixtures, leading to separation of the higher melting stearin-rich material from the liquid, which is typically enriched in fats derived from oleic acid. It can be obtained by interesterification, again exploiting its higher melting point which allows the higher melting tristearin to be removed from the equilibrated mixture. Stearin is a side product obtained during the extraction of cod liver oil removed during the chilling process at temperatures below −5 °C.

Stearin is used as a hardening agent in the manufacture of candles and soap. [8] It is mixed with a sodium hydroxide solution in water, creating a reaction which gives glycerin and sodium stearate, the main ingredient in most soap:

Stearin is also added to aluminium flakes to help in the grinding process in making dark aluminium powder.[ clarification needed ] 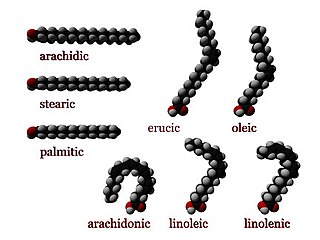 In chemistry, particularly in biochemistry, a fatty acid is a carboxylic acid with a long aliphatic chain, which is either saturated or unsaturated. Most naturally occurring fatty acids have an unbranched chain of an even number of carbon atoms, from 4 to 28. Fatty acids are a major component of the lipids in some species such as microalgae but in some other organisms are not found in their standalone form, but instead exist as three main classes of esters: triglycerides, phospholipids, and cholesteryl esters. In any of these forms, fatty acids are both important dietary sources of fuel for animals and they are important structural components for cells.

A triglyceride is an ester derived from glycerol and three fatty acids. Triglycerides are the main constituents of body fat in humans and other vertebrates, as well as vegetable fat. They are also present in the blood to enable the bidirectional transference of adipose fat and blood glucose from the liver, and are a major component of human skin oils. 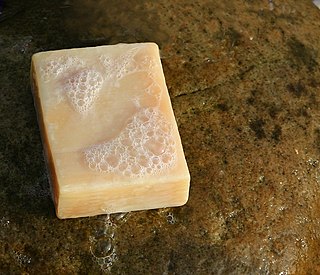 Soap is a salt of a fatty acid used in a variety of cleansing and lubricating products. In a domestic setting, soaps are surfactants usually used for washing, bathing, and other types of housekeeping. In industrial settings, soaps are used as thickeners, components of some lubricants, and precursors to catalysts.

Waxes are a diverse class of organic compounds that are lipophilic, malleable solids near ambient temperatures. They include higher alkanes and lipids, typically with melting points above about 40 °C (104 °F), melting to give low viscosity liquids. Waxes are insoluble in water but soluble in organic, nonpolar solvents. Natural waxes of different types are produced by plants and animals and occur in petroleum.

Tallow is a rendered form of beef or mutton fat, primarily made up of triglycerides. It is solid at room temperature. Unlike suet, tallow can be stored for extended periods without the need for refrigeration to prevent decomposition, provided it is kept in an airtight container to prevent oxidation.

Saponification is a process that involves the conversion of fat, oil, or lipid, into soap and alcohol by the action of aqueous alkali .) Soaps are salts of fatty acids, which in turn are carboxylic acids with long carbon chains. A typical soap is sodium oleate. 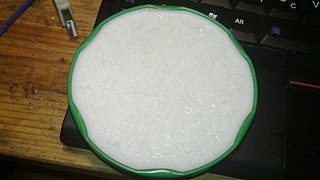 Stearic acid ( STEER-ik, stee-ARR-ik) is a saturated fatty acid with an 18-carbon chain. The IUPAC name is octadecanoic acid. It is a waxy solid and its chemical formula is C17H35CO2H. Its name comes from the Greek word στέαρ "stéar", which means tallow. The salts and esters of stearic acid are called stearates. As its ester, stearic acid is one of the most common saturated fatty acids found in nature following palmitic acid. The triglyceride derived from three molecules of stearic acid is called stearin.

Palmitic acid, or hexadecanoic acid in IUPAC nomenclature, is the most common saturated fatty acid found in animals, plants and microorganisms. Its chemical formula is CH3(CH2)14COOH, and its C:D is 16:0. As its name indicates, it is a major component of the oil from the fruit of oil palms (palm oil). Palmitic acid can also be found in meats, cheeses, butter, and other dairy products. Palmitates are the salts and esters of palmitic acid. The palmitate anion is the observed form of palmitic acid at physiologic pH (7.4).

Oleic acid is a fatty acid that occurs naturally in various animal and vegetable fats and oils. It is an odorless, colorless oil, although commercial samples may be yellowish. In chemical terms, oleic acid is classified as a monounsaturated omega-9 fatty acid, abbreviated with a lipid number of 18:1 cis-9. It has the formula CH3(CH2)7CH=CH(CH2)7COOH. The name derives from the Latin word oleum, which means oil. It is the most common fatty acid in nature. The salts and esters of oleic acid are called oleates.

Lauric acid or systematically, dodecanoic acid, is a saturated fatty acid with a 12-carbon atom chain, thus having many properties of medium-chain fatty acids, is a bright white, powdery solid with a faint odor of bay oil or soap. The salts and esters of lauric acid are known as laurates.

Capric acid, also known as decanoic acid or decylic acid, is a saturated fatty acid. Its formula is CH3(CH2)8COOH. Salts and esters of decanoic acid are called caprates or decanoates. The term capric acid is derived from the Latin "caper / capra" (goat) because the sweaty, unpleasant smell of the compound is reminiscent of goats.

Trimyristin is an ester with the chemical formula C45H86O6. It is a saturated fat which is the triglyceride of myristic acid. Trimyristin is a white to yellowish-gray solid that is insoluble in water, but soluble in ethanol, benzene, chloroform, dichloromethane, and ether.

Jojoba oil is the liquid produced in the seed of the Simmondsia chinensis (jojoba) plant, a shrub, which is native to southern Arizona, southern California, and northwestern Mexico. The oil makes up approximately 50% of the jojoba seed by weight. The terms "jojoba oil" and "jojoba wax" are often used interchangeably because the wax visually appears to be a mobile oil, but as a wax it is composed almost entirely (~97%) of mono-esters of long-chain fatty acids and alcohols (wax ester), accompanied by only a tiny fraction of triglyceride esters. This composition accounts for its extreme shelf-life stability and extraordinary resistance to high temperatures, compared with true vegetable oils.

Sodium stearate is the sodium salt of stearic acid. This white solid is the most common soap. It is found in many types of solid deodorants, rubbers, latex paints, and inks. It is also a component of some food additives and food flavorings.

Oleochemistry is the study of vegetable oils and animal oils and fats, and oleochemicals derived from these fats and oils. The resulting product can be called oleochemicals (from Latin: oleum "olive oil"). The major product of this industry is soap, approximately 8.9×106 tons of which were produced in 1990. Other major oleochemicals include fatty acids, fatty acid methyl esters, fatty alcohols and fatty amines. Glycerol is a side product of all of these processes. Intermediate chemical substances produced from these basic oleochemical substances include alcohol ethoxylates, alcohol sulfates, alcohol ether sulfates, quaternary ammonium salts, monoacylglycerols (MAG), diacylglycerols (DAG), structured triacylglycerols (TAG), sugar esters, and other oleochemical products.

Kokum oil is a seed oil derived from the seeds of the kokum tree. Kokum oil is edible and can also be used for things other than cooking.