Stefan Effenberg (German pronunciation: [ˈʃtɛfan ˈʔɛfn̩bɛʁk] ; born 2 August 1968) is a German former footballer who most recently acted as sporting director for KFC Uerdingen 05. [2] [3] A central midfielder, he was known for his leadership skills, passing range, shooting ability, and physical strength, but was also a temperamental and controversial character. [4]

In the Bundesliga alone – where he represented Bayern Munich most notably, in six seasons and in two different spells – Effenberg collected 109 yellow cards, an all-time record at the time of his retirement. With Bayern, he won three Bundesligas and captained the club to the UEFA Champions League title in 2001.

In a career which was cut short after a run-in with the management, he played for Germany on more than 30 occasions, representing the nation in one World Cup and one European Championship. His nickname is Der Tiger (IPA: [deːɐ̯ ˈtiːɡɐ] , "the tiger").

Born and raised in Niendorf, Hamburg on 2 August 1968, Stefan Effenberg started his professional career with Borussia Mönchengladbach, where he became an undisputed first-choice by the age of 20. This attracted the interest of Bundesliga giants FC Bayern Munich, where he scored 19 goals in his first two seasons after his transfer, [5] although the club failed to win any silverware with Effenberg in the lineup.

When legendary Lothar Matthäus (who also represented Mönchengladbach) returned to Bayern in 1992, Effenberg moved to ACF Fiorentina. Despite the presence of Dane Brian Laudrup and Argentine Gabriel Batistuta, Fiorentina was relegated from Serie A in his first season. Effenberg stayed on in the second flight, winning promotion back at the first attempt.

In the summer of 1994, Effenberg then moved back to Gladbach, where he appeared in 118 league matches, scoring 23 goals, before Bayern re-signed him in 1998. Effenberg's second spell with the Bavarians was much more successful. He collected three Bundesliga titles in a row, and Bayern also reached two UEFA Champions League finals, the first of which was a 1–2 defeat to Manchester United F.C. in 1999. Bayern returned to the final in 2001 with Effenberg as captain. He scored Bayern's equalising goal from the penalty spot in a victory against Valencia (1–1, penalty shootout win). After the final, Effenberg was named the Most Valuable Player of the 2000–01 UEFA Champions League. [6] After his departure, club fans voted him one of the eleven greatest Bayern players of all time. [7]

After an unassuming spell at VfL Wolfsburg, [8] Effenberg ended his career in Qatar with Al-Arabi Sports Club, with Gabriel Batistuta as his teammate. He appeared occasionally as a color commentator for German TV after his retirement as a player.

On 10 October 2019, KFC Uerdingen 05 presented Effenberg as the new sporting director. [2] Following a few troubled months which included the team briefly staying at an Italian hotel with no football pitch for a mid-season training camp, [11] he stepped back from this position prematurely in May 2020. [3]

Effenberg played 35 games for the Germany national team and scored five goals. His debut came on 5 June 1991, in a Euro 1992 qualifier against Wales, as he played the last 18 minutes of a 1–0 away loss. He would be an everpresent fixture during the final stages, even netting in the second group stage match, a 2–0 win over Scotland.

During a group game against South Korea in the 1994 FIFA World Cup. Effenberg "gave the finger" to German fans at the Cotton Bowl in the 35 °C (95 °F) heat of Dallas when he got substituted after a subpar performance; the Germans were then only one goal up, after leading 3–0. [12] German coach Berti Vogts was so outraged by this incident that he dropped Effenberg from the team on the spot, and declared that he was finished as an international player. [13] [14]

Effenberg did not appear in another international match again until 1998, when he was briefly re-instated to the national team for a couple of friendly matches in Malta in September, which happened to be Vogts' last two matches as national team coach. They turned out to be his last caps for Germany.

Effenberg had a history of attracting attention and ire from fans and other players alike with his behaviour. In 1991, prior to a UEFA Cup game against then-semi-professional Cork City, Effenberg told the press he was sure of a victory, saying Cork City midfielder Dave Barry was "like (his) grandfather". Barry got his retribution by scoring the opening goal in the team's 1–1 draw at Musgrave Park. [15]

In the late 1990s, Effenberg was rarely out of the tabloids, especially when he left his wife Martina and revealed an affair with Claudia Strunz, who at that time was the wife of former teammate Thomas Strunz. Later, the player published a controversial autobiography, notorious for its blatant contents – which included lashing out at some other football professionals, namely club and national side mate, Lothar Matthäus.

In 2001, Effenberg was fined after being found guilty of assaulting a woman in a nightclub. [16] The following year, he implied that unemployed people in Germany were in fact too lazy to look for work, and demanded they took benefit cuts. The interview was issued in Playboy . [17]

Strunz and Effenberg were married in 2004, [18] and the player also had three children from his first marriage; the couple then relocated to Florida. [19]

Jens Jeremies is a German former professional footballer who played as a defensive midfielder.

Karl-Heinz "Kalle" Rummenigge is a German football executive and former professional player. He was the longtime Chairman of Executive Board of FC Bayern München AG, a daughter company of German Bundesliga team Bayern Munich.

Patrik Jonas Andersson is a Swedish former professional footballer who played as a defender.

Günter Theodor Netzer is a German former professional football player and executive. He achieved great success in Germany with Borussia Mönchengladbach in the early 1970s and, after moving to Spain in 1973, with Real Madrid. A technically gifted playmaker, Netzer played as an attacking midfielder and is considered one of the greatest passers in the game's history. He was voted German Footballer of the Year twice, in 1972 and 1973. 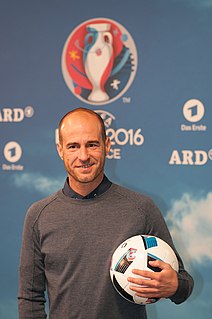 The 2000–01 Bundesliga was the 38th season of the Bundesliga, Germany's premier football league. It began on 11 August 2000 and ended on 19 May 2001. FC Bayern Munich successfully defended their title after a last-minute Patrik Andersson goal denied Schalke 04 their first title.

The 1995–96 Bundesliga was the 33rd season of the Bundesliga, Germany's premier football league. It began on 11 August 1995 and ended on 18 May 1996. Borussia Dortmund were the defending champions.

The 1994–95 Bundesliga was the 32nd season of the Bundesliga, Germany's premier football league. It began on 19 August 1994 and ended on 17 June 1995. FC Bayern Munich were the defending champions.

Thomas Strunz is a German retired footballer who played mostly as a defensive midfielder. 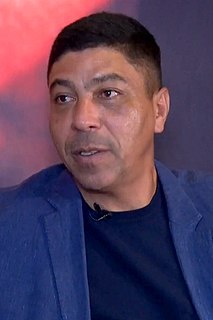 Élber de Souza, commonly known as Giovane Élber, is a Brazilian former professional footballer who played as a striker.

The 1976–77 Bundesliga was the 14th season of the Bundesliga, West Germany's premier football league. It began on 14 August 1976 and ended on 21 May 1977. Borussia Mönchengladbach were the defending champions.

Holger Fach is a German football manager and former professional player. Mainly a defensive midfielder, he could also pitch in at centre back.

Jürgen Kohler is a World Cup-winning German footballer and manager, who played as a centre-back. Since 2018, he has been in charge of the youth team of Viktoria Köln.

Heiko Herrlich is a German football manager and former player who played as a striker. He last managed FC Augsburg. 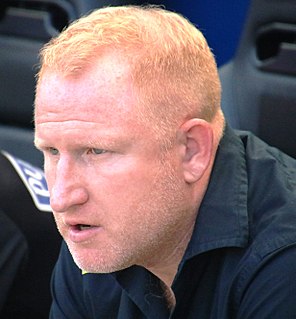 The 1990–91 FC Bayern Munich season was the 91st season in the club's history and 26th season since promotion from Regionalliga Süd in 1965. Bayern finished three points behind champions 1. FC Kaiserslautern in the Bundesliga. In the DFB-Pokal, Bayern were eliminated in the first round for the first time in club history. Bayern reached the semifinals of the European Cup before being eliminated by Red Star Belgrade due to an own goal in the 90th minute of the second leg. The first competitive match of the season was the DFB-Supercup on 31 July which Bayern won by a score of 4–1 over 1. FC Kaiserslautern.

The 2017–18 DFB-Pokal was the 75th season of the annual German football cup competition. Sixty-four teams participated in the competition, including all teams from the previous year's Bundesliga and the 2. Bundesliga. The competition began on 11 August 2017 with the first of six rounds and ended on 19 May 2018 with the final at the Olympiastadion in Berlin, a nominally neutral venue, which has hosted the final since 1985. The DFB-Pokal is considered the second-most important club title in German football after the Bundesliga championship. The DFB-Pokal is run by the German Football Association (DFB).

The 2020–21 season was the 111th season of competitive football in Germany.