Steliyan Dobrev (Bulgarian : Стелиян Добрев; born 12 November 2003) is a Bulgarian footballer who plays for CSKA 1948 as a midfielder.

Kiril Kotev is a Bulgarian former professional footballer who played as a defender.

Milen Dobrev was a Bulgarian weightlifter. He became Olympic champion in 2004 in the middle heavyweight class. That same year, he won the European Championship in Kyiv. Dobrev died of a heart attack in his home in Plovdiv in 2015. He is the first Bulgarian to win an Olympic title in weightlifting as a member of a team from Plovdiv (Maritsa-Olimp). After winning the 2001 Brisbane Goodwill Games in Australia, he established himself as the elite of weightlifters. His world title was from Vancouver, Canada, in 2003. He also became European champion in 2003 in Loutraki, Greece, and in 2004 in Kyiv, Ukraine. 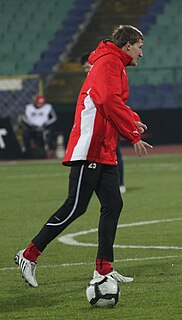 Preslav Yordanov is a Bulgarian footballer who currently plays as a forward for Pirin Blagoevgrad.

The 2009–10 season was PFC CSKA Sofia's 59th consecutive season in A Group. This article shows player statistics and all matches that the club have and will play during the 2009–10 season. 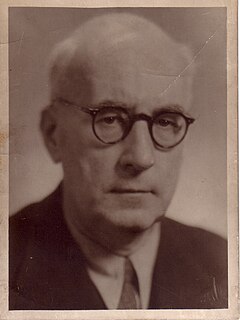 Dimitar Dobrev was one of Bulgaria’s leading economists and academicians. He worked in the field of accountancy as science, a theoretician, economist, lecturer, second Rector of the Free University of Political and Economic Sciences, professor at the State High School of Finance and administrative sciences and the Higher Economics Institute "Karl Marx".

Dobri Dimitrov Dobrev, better known as Grandpa Dobri, Elder Dobri or The Saint of Bailovo, was a Bulgarian ascetic who walked over 20 kilometres (12 mi) each day to sit or stand in front of the Cathedral of Alexander Nevsky in Sofia to collect money for charitable causes. Dobrev donated all the money he collected to charities, orphanages, churches, and monasteries. He turned 100 in July 2014. In Bulgarian, his name translates as "good" or "kind".

Nikolay Kirilov Dobrev was a Bulgarian politician who served as Minister of the Interior of Bulgaria between 10 May 1996 and 12 February 1997.

Mihail Minkov is a Bulgarian professional footballer who plays as a defender for CSKA 1948 Sofia.

Kristian Dobrev is a Bulgarian footballer who currently plays as a forward for Botev Plovdiv.

Vasil Dobrev is a Bulgarian professional footballer who plays as a defender for Botev Vratsa.

The 2018–19 Second League is the 64th season of the Second League, the second tier of the Bulgarian football league system, and the 3rd season under this name and current league structure. In June 2018, the Executive Committee of the Bulgarian Football Union decided to increase the participating teams to 18 for the 2019–20 season; as a result, only two teams will be relegated to Third League. The fixture list was released on 8 June 2018. The participating teams were confirmed on the same day. FC Tsarsko Selo Sofia became champions of the second league and were promoted directly to the first division. FC Dobrudzha Dobrich and PFC Nesebar were relegated.

The 2020–21 First Professional Football League, also known as efbet League for sponsorship reasons, was the 97th season of the top division of the Bulgarian football league system, the 72nd since a league format was adopted for the national competition of A Group as a top tier of the pyramid, and also the 5th season of the First Professional Football League, which decides the Bulgarian champion. Ludogorets Razgrad were the defending champions for the ninth consecutive time.

The 2020–21 season is CSKA 1948's first season in the Bulgarian First League, after CSKA (Sofia) bankrupt in 2016, following three promotions in four seasons. They will also take part in the Bulgarian Cup.

Konstantin Dobrev is a Bulgarian badminton player from BC Academics Sofia club.

CSKA 1948 II or CSKA 1948 2 is a Bulgarian professional football team based in Sofia. Founded in 2019, it is the reserve team of CSKA 1948 Sofia, and currently plays in Second League, the second level of Bulgarian football.