Stella Chiweshe (also Stella Rambisai Chiweshe, Stella Rambisai Chiweshe Nekati, Mbuya Stella Chiweshe, or Stella Nekati Chiweshe; 8 July 1946 – 20 January 2023) was a Zimbabwean musician. She was known internationally for her singing and playing of the mbira dzavadzimu, a traditional instrument of the Shona people of Zimbabwe. She was one of few female players, and learned to play from 1966 to 1969, when other women did not.

Chiweshe was born on 8 July 1946 in Mujumi Village in Mhondoro. [2] She learned to play the mbira from 1966 to 1969, at a time when there were social taboos against women playing the instrument, [3] [4] as well as colonial British prohibitions on cultural activities. [5] [6] She was taught by her great-uncle, after being refused by many teachers. [7] During this period Chiweshe also performed forbidden Shona spiritual ceremonies. [5]

During the 1970s her music supported nationalist and women's rights causes. [8] Her career as a recording artist began in 1974 with the release of the single 'Kasahwa' (Teal Records). [9] [10] In 1981 she joined the National Dance Company of Zimbabwe, playing the mbira, and toured with them internationally. [9] During the 1980s, to continue a revitalisation of mbira music, Chiweshe amplified her mbira and introduced electric instruments to her supporting band. [11] [12] [13] In 1985 she formed her first band The Earthquake. [14] In 1988 Chiweshe recorded two black liberationist songs, 'Chimurenga' and 'NeHondo'. [15] She also helped to form the Zimbabwe Musicians Union. [9] During this period she also played the titular role in the film Ambuya Nehanda, which portrayed the life of Mbuya Nehanda, an anti-colonial resistance leader. [7]

Chiweshe performed numerous times in Germany and also participated in the WOMAD festival (1994 in the United States, 1995 in Australia, and 2006 in Spain). In 2004 she toured England with her daughter. [1] She was known for her spiritual presence on stage, and for often taking snuff while performing. [14]

On 21 January 2023 the government of Zimbabwe offered financial support for her funeral. [18]

Chiweshe is considered a ground-breaking Zimbabwean musician, not just for her skills, but for the path for women mbira-players that she forged. [3] [19] She was also admired for the humanism in her music. [20]

During her career Chiweshe was criticised by some for combining sacred and commercial music. [21] Her work was sampled by many artists, including The New Vets, a Zimbabwean activist rap group, who campaigned for land reform using a track Chiweshe sang on. [22] 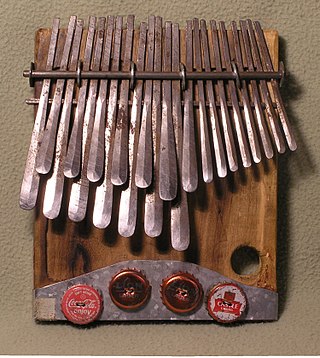 Mbira are a family of musical instruments, traditional to the Shona people of Zimbabwe. They consist of a wooden board with attached staggered metal tines, played by holding the instrument in the hands and plucking the tines with the thumbs, the right forefinger, and sometimes the left forefinger. Musicologists classify it as a lamellaphone, part of the plucked idiophone family of musical instruments. In Eastern and Southern Africa, there are many kinds of mbira, often accompanied by the hosho, a percussion instrument. It is often an important instrument played at religious ceremonies, weddings, and other social gatherings. The "Art of crafting and playing Mbira/Sansi, the finger-plucking traditional musical instrument in Malawi and Zimbabwe" was added to the UNESCO Representative List of the Intangible Cultural Heritage of Humanity in 2020.

Zimbabwean music is heavily reliant on the use of instruments such as the mbira, Ngoma drums and hosho. Their music symbolizes much more than a simple rhythm, as the folk and pop style styled music was used as a symbol of hope for Zimbabweans looking to gain independence from Rhodesia. Music has played a significant role in the history of Zimbabwe, from a vital role in the traditional Bira ceremony used to call on ancestral spirits, to protest songs during the struggle for independence. The community in Zimbabwe used music to voice their resistance to their oppression, as one of the only weapons they had available to fight back with. In the eighties, the Music of Zimbabwe was at the center of the African Music scene thanks to genres such as Sungura and Jit. However, several performers were banned by state TV and radio leading to the closing of several music venues.

Thomas Tafirenyika Mapfumo is a musician nicknamed "The Lion of Zimbabwe" and "Mukanya" for his immense popularity and for the political influence he wields through his music, including his sharp criticism of the government of former Zimbabwean president Robert Mugabe. He both created and made popular Chimurenga music, and his slow-moving style and distinctive voice is instantly recognisable to Zimbabweans.

The hosho are Zimbabwean musical instruments consisting of a pair of maranka (mapudzi) gourds with seeds. They are used as major instruments in many traditional Shona music genres, such as in mbira ensembles and in mhande. They typically contain hota seeds inside them. Before the hota seeds are added, the hosho is boiled in salted water and the inside is scraped out with a corncob, newspaper plug, or woven wire. Removing the debris inside the hosho allows for a more sharp and percussive tone.

Shona music is the music of the Shona people of Zimbabwe. There are several different types of traditional Shona music including mbira, singing, hosho and drumming. Very often, this music will be accompanied by dancing, and participation by the audience. In Shona music, there is little distinction between the performer and the audience, both are often actively involved in the music-making, and both are important in the religious ceremonies where Shona music is often heard.

Abraham Dumisani Maraire, known to friends as "Dumi", was a master performer of the mbira, a traditional instrument of the Shona ethnic group of Zimbabwe. He specialized in the form of mbira called nyunga nyunga, as well as the Zimbabwean marimba. He introduced Zimbabwean music to North America, initiating a flourishing of Zimbabwean music in the Pacific Northwest that continues into the 21st century.

The Shona people are part of the Bantu ethnic group native to Southern Africa, primarily living in Zimbabwe where they form the majority of the population, as well as Mozambique, South Africa, and a worldwide diaspora including global celebrities such as Thandiwe Newton. There are five major Shona language/dialect clusters : Karanga, Zezuru, Korekore, Manyika and Ndau.

Nehanda Charwe Nyakasikana also known as Mbuya Nehanda was a svikiro, or spirit medium of the Zezuru Shona people. She was a medium of Nehanda, a female Shona mhondoro. As one of the spiritual leaders of the Shona, she was one of the leaders of a revolt, the Chimurenga, against the British South Africa Company's colonisation of what is now Zimbabwe led by Cecil John Rhodes in 1889. She was a Hera of the HwataShava Mufakose Dynasty. She and her ally Sekuru Kaguvi were eventually captured and executed by the company on charges of murder. She has been commemorated by Zimbabweans by statues, songs, novels, and poems, and the names of streets and hospitals. The legacy of the medium continued to be linked to the theme of resistance, particularly the guerrilla war that began in 1972. Her name became of increasing importance to the nationalist movements in Zimbabwe.

Paul Franklin Berliner is an American ethnomusicologist, best known for specializing in African music as well as jazz and other improvisational systems. He is best known for his popular ethnomusicology book on the Zimbabwean mbira, The Soul of Mbira: Music and Traditions of the Shona People of Zimbabwe, for which he received the ASCAP Deems Taylor Award. He also published Thinking in Jazz: The Infinite Art of Improvisation for which he received The Society of Ethnomusicology's Alan Merriam Prize for Outstanding Book in Musicology. Berliner received his Ph.D. from Wesleyan University.

Forward Kwenda is a mbira performer from Zimbabwe. He was born in the rural Buhera area in Manicaland, an area known for its fierce resistance to colonial rulers and respect for Shona tradition. As a young boy, Forward excelled in traditional dance and recitation of ancient poetry. At the age of 10, he began to play ngoma (drums) and hosho for his mother's gombwe (rain-making) spirit. He was given the name "Forward" because of his curiosity about many subjects, enthusiastic involvement in many activities and his performances for guerrilla forces during the Rhodesian Bush War.

Articles related to Zimbabwe include:

Claims are in dispute. The Hwata dynasty ruled over part of present-day Zimbabwe from about 1760 until British colonisation in the late 19th century, and played a prominent part in the First Chimurenga war of 1896–7.

Tendayi (Samaita) Gahamadze is a Zimbabwean artist and songwriter.

Indigenous religion in Zimbabwe is explained in terms of the Zimbabwe ethnic groups, beliefs, norms and values, rites and rituals, ceremonies and celebrations. Indigenous religion is more carried out by living it than with its theory. Religion among the Africans is very important, it plays a vital role for the individuals, the family and the community as a whole. Bourdlillon asserts that indigenous religion is one, though there can be various manifestation just like Christianity which is one but has various denominations. Thomas Gale defined the word indigenous as to anything that is native to a particular geographical culture. Mbiti says in Zimbabwe Indigenous religion is in two classes, the Ndebele and Shona. However, Zimbabwe has a lot of minority tribes including the Tonga, Venda, Kalanga and Sothu.

Albert Chimedza is a Zimbabwean poet and founder of the Mbira Centre. His only collection of poetry, Counterpoint was published in 1984, together with Hopewell Seyaseya. Over the years, Chimedza has focused his energy on promoting the mbira, a unique traditional instrument that has been played for more than 1,000 years. The mbira is integral to the traditions and cultural identity of the Shona people of Zimbabwe.

This topic covers events and articles related to 2023 in music