Stephen Benton Elkins (September 26, 1841 –January 4, 1911) was an American industrialist and political figure. He served as the Secretary of War between 1891 and 1893. He served in the United States Congress as a Delegate from the Territory of New Mexico and a Senator from West Virginia.

Stephen Benton Elkins was born on September 26, 1841 near New Lexington, Ohio and moved with his family to Westport, Missouri (now part of Kansas City) in the mid-1840s to Philip Duncan Elkins and Sarah Pickett Withers. He attended the Masonic College in Lexington, Missouri in the 1850s, and graduated from the University of Missouri in Columbia in 1860. After graduation, he briefly taught school in Cass County, Missouri. Among his pupils was future James-Younger Gang member Cole Younger. [1]

They marched me along and we got to Quantrill's camp. There I saw Cole Younger, Dick Yager and George M. Todd, and several others afterward known for desperate deeds. Those I have mentioned were farmers' sons around where I lived. They identified me and said: Here comes Steve Elkins. All the way along I had been afraid that those fellows who had captured me would shoot me in the back, for I had on the watch which I am carrying now in the office of the secretary of war. [2]

Elkins entered the Union Army as a captain of militia in the 77th Missouri Infantry. He served under Kersey Coates and only saw action once in the Battle of Lone Jack, which he said filled him with disgust for war. Elkins noted that his good fortune of being protected by Quantrill matched a fear of being butchered by Quantrill for becoming a Union soldier as Quantrill's Raiders were thought to be present at the battle.

Foster thought the Confederates were the guerrilla hands who raised the black flag, and never gave any quarter. So he refused to surrender, and every one of his officers was picked off. The guerrillas were victorious. I went over the battlefield afterward, the blood, the cries for water and death, the naked bodies stripped of their clothing, the dead horses which served for ramparts, gave me a disgust for war, which makes it seem strange that I am here at the head of the war department of this great government. [3]

Elkins and Foster from the Lone Jack Battle were to argue for a pardon for Younger following his conviction in the Northfield, Minnesota bank robbery (Younger had rescued Foster from execution by Quantrill's Raiders in the battle).

Elkins entered the practice of law at Mesilla, New Mexico, and was elected to the territorial legislature in 1864 and 1865. He was appointed territorial district attorney for a term from 1866 to 1867. It was at this time, on June 10, 1866, that he married his first wife Sarah Simms Jacobs.

In 1867, Elkins served as attorney general of the territory and later as U.S. district attorney from 1867 to 1870. He was elected territorial delegate to the U.S. Congress in 1872, and reelected in 1874, serving from March 4, 1873 to March 4, 1877. In 1875, he met and married his second wife, Hallie Davis, and continued to practice law. He founded and was president of the Santa Fe National Bank, and pursued broad business interests in land, rail, mining, and finance including president of the massive Maxwell Land Grant Company. [4] In attempting to evict "squattors" (legitimate land grant heirs) from the Land Grant he would be accused of being part of the Santa Fe Ring. Along with his brother in law, Thomas B. Catron, Elkins participated in what would become the largest land speculation conspiracy in U.S. history. Using his influence on politicians such as congressmen, territorial judges, and U.S. Surveyors General, Elkins was able to patent Spanish and Mexican land grants in his name, thereby illegally including himself as a legitimate heir to the grants. By collectively representing opposing parties in land disputes, Elkins and Catron effectively manipulated territorial government policy to illegally partition Spanish and Mexican land grants, a direct violation of the Treaty of Guadalupe Hidalgo.

Elkins married Hallie Davis, daughter of Senator Henry G. Davis of West Virginia, in 1875. He became a citizen of West Virginia in 1878 and began developing oil, coal, and timber industries with his father-in-law. They partnered to form the Davis Coal and Coke Company.

Stephen and Hallie built their home, Halliehurst, in Randolph County, and the town of Elkins was established nearby. [5] New York architect Charles T. Mott designed the house. It was given by his widow along with surrounding property to Davis and Elkins College and is now part of the college's campus. It is individually listed on the National Register of Historic Places and also is a contributing property in the Davis and Elkins Historic District.

Elkins served as Secretary of War in the Benjamin Harrison administration from December 17, 1891 to March 5, 1893. [6] Amongst his goals were that the rank of lieutenant general be revived, and also that noncommissioned officers receive higher pay to improve the quality of the service. He also broadened the intelligence functions of the Division of Military Information.

After his service as Secretary, Elkins was elected to the U.S. Senate in 1895, serving the state of West Virginia, and was re-elected twice. In the Senate, he held the positions of chairman of the Committee on the Geological Survey (Fifty-sixth and Fifty-ninth Congresses), and of member of the Committee on Interstate Commerce (Fifty-seventh through Sixty-first Congresses). Elkins served as Senator until his death in Washington, D.C. in 1911, and is interred in Maplewood Cemetery of Elkins, West Virginia. [7]

Stephen Benton Elkins is the namesake of Elkins, West Virginia. [8] 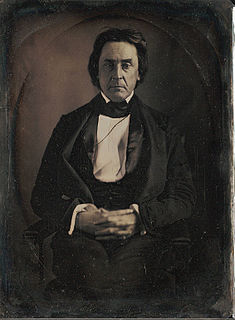 David Rice Atchison was a mid-19th century Democratic United States Senator from Missouri. He served as President pro tempore of the United States Senate for six years. Atchison served as a major general in the Missouri State Militia in 1838 during Missouri's Mormon War and as a Confederate brigadier general during the American Civil War under Major General Sterling Price in the Missouri Home Guard. He is best known for the claim that for 24 hours—Sunday, March 4, 1849 through noon on Monday—he may have been Acting President of the United States. This belief, however, is dismissed by nearly all historians, scholars, and biographers. 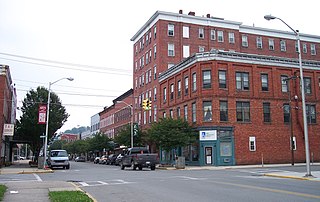 Elkins is a city in and the county seat of Randolph County, West Virginia, United States. The community was incorporated in 1890 and named in honor of Stephen Benton Elkins, a U.S. Senator from West Virginia. The population was 7,094 at the 2010 census. Elkins is home to Davis and Elkins College and to the Mountain State Forest Festival, held in early October every year. 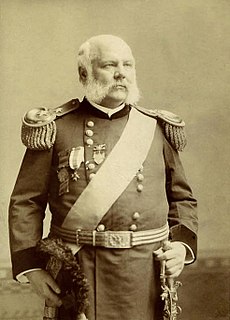 John McAllister Schofield was an American soldier who held major commands during the American Civil War. He later served as U.S. Secretary of War under Presidents Andrew Johnson and Ulysses S. Grant, and Commanding General of the United States Army.

David Levy Yulee was an American politician and attorney. Born in St. Thomas, then under British control, he was of Sephardi Jewish ancestry: his father was from Morocco and his mother from Europe. The family moved to Florida when he was a child, and he grew up there on their extensive lands. He later served as Florida's territorial delegate to Congress. Yulee was the first person of Jewish ancestry to be elected and serve as a United States Senator. He founded the Florida Railroad Company and served as president of several other companies, earning the nickname of "Father of Florida Railroads." In 2000 he was recognized as that year's "Great Floridian" by the state. 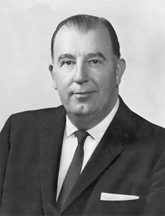 Jennings Randolph was an American politician from West Virginia. He was a member of the Democratic Party and was the last surviving member of the United States Congress to have served during the first 100 days of Franklin D. Roosevelt's administration. 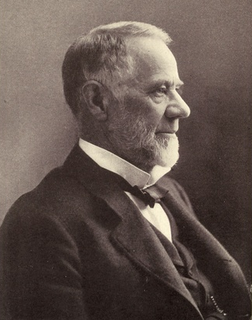 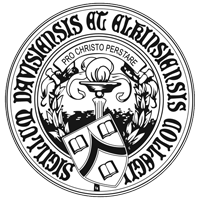 Clarence Wayland Watson was a coal mining "baron" from West Virginia. Watson organized several coal companies that became the Consolidation Coal and Mining Companies in West Virginia, Maryland, Pennsylvania, and Kentucky. Watson was president of the company until 1911, then became its chairman. Later in life, he became President of Elk Horn Coal Company and served as trustee of various corporations, railroads, and banks across the United States. US Senator. Elected as a Senator from West Virginia to the United States Senate to fill the vacancy caused by the death of Senator Stephen B. Elkins, serving from 1911 to 1913. During World War I he served in the United State Army as a Lieutenant Colonel in the Ordnance Department, and served in France from 1918 to 1919. While in France he received a nomination for re-election to his Senate seat, but was defeated. Thomas Benton Catron was an American politician and lawyer who was influential in the establishment of the U.S. state of New Mexico, and served as one of its first United States Senators. 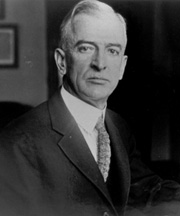 Howard Sutherland was an American politician. He was a Republican who represented West Virginia in both houses of the United States Congress.

Davis Elkins was a United States Senator from West Virginia. 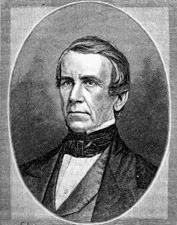 Henry Sheffie Geyer was a politician, lawyer, and soldier from Missouri. Born in Frederick, Maryland, he was the son of John Geyer, saddler of Frederick Town. Geyer was of German descent, his father having come from Prussia. 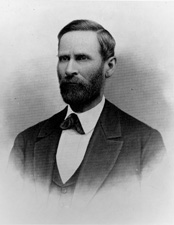 Waldo P. Johnson was an American politician who served as a Confederate States Senator from Missouri from 1863 to 1865.

Senator Stephen Benton Elkins House, also known as Halliehurst, is an historic mansion located at Elkins, Randolph County, West Virginia. It was designed by architect Charles T. Mott and built in 1890, as a summer home for U.S. Senator Stephen Benton Elkins. It consists of a three-story main block with hipped roof and service wing. The roof is punctuated by towers, turrets, dormers, and chimneys. A porch surrounds much of the first floor. It features a two-story portico with columns around a central, flat roofed tower. Located on a mountainside, it commands a view of the valley beneath and the forest and mountain peaks that surround the valley. In 1923, the house and approximately 60 acres of land were deeded to Davis & Elkins College by Sen. Elkins' widow.

The Davis and Elkins Historic District is a National Historic Landmark District on the campus of Davis & Elkins College in Elkins, West Virginia. It includes two mansions, the Senator Stephen Benton Elkins House (Halliehurst) and Graceland, that are separately listed on the National Register of Historic Places. A gate house and an ice house are also included in the district. These four structures are associated with the families of Henry Gassaway Davis (1823-1916) and Stephen Benton Elkins (1841-1911), who were dominating figures in the politics and economy of West Virginia in the late 19th century. It was declared a National Historic Landmark in 1998.

Nathaniel Soley Benton was an American politician from New York.

Events from the year 1861 in the United States. This year marked the beginning of the American Civil War.