Last updated September 12, 2022
13th-century Archbishop of Canterbury, theologian, and cardinal
Not to be confused with Stephen Langdon.

Stephen Langton (c. 1150 – 9 July 1228) was an English Cardinal of the Roman Catholic Church and Archbishop of Canterbury between 1207 and his death in 1228. The dispute between King John of England and Pope Innocent III over his election was a major factor in the crisis which produced Magna Carta in 1215. Cardinal Langton is also credited with having divided the Bible into the standard modern arrangement of chapters used today.

His father was Henry Langton, a landowner in Langton by Wragby, Lincolnshire. Stephen Langton may have been born in a moated farmhouse in the village, [1] and was probably educated in his local cathedral school. He could also have been born at Friday Street, Surrey, according to local legend.

Stephen studied at the University of Paris and lectured there on theology until 1206, when Pope Innocent III, with whom he had formed a friendship in Paris, called him to Rome and made him cardinal-priest of San Crisogono, Rome. [2] [3] His piety and learning had already won him prebends in Paris and York [4] and he was recognised as the foremost English churchman.

His brother Simon Langton [5] was elected Archbishop of York in 1215, but that election was quashed by Pope Innocent III. [6] Simon served his brother Stephen as Archdeacon of Canterbury in 1227. [5] Simon and Stephen had another brother named Walter, a knight who died childless.

On the death of Hubert Walter, Archbishop of Canterbury, in 1205, the election of a successor proved problematic: some of the younger canons of the cathedral chapter elected Reginald, the subprior of Christ Church, Canterbury, as bishop while another faction under pressure from King John chose John de Grey, Bishop of Norwich. Both elections were quashed on appeal to Rome, and sixteen canons of the chapter, who had gone to Rome with a mandate to act for the whole chapter, were ordered to proceed to a new election in presence of the Pope. Langton was chosen and was consecrated by the Pope at Viterbo on 17 June 1207. [7]

There followed a hard political struggle between John of England and Pope Innocent III. The King proclaimed as a public enemy anyone who recognised Stephen as Archbishop. On 15 July 1207, John expelled the Canterbury chapter, which was now unanimous in support of Stephen. In March 1208, Pope Innocent III placed England under an interdict and at the close of 1212, after repeated negotiations had failed, he passed sentence of deposition against John, committing the execution of the sentence to Philip II of France in January 1213. [7]

In May 1213 King John yielded and thus in July, Stephen and his fellow exiles returned to England. Since his consecration till that moment he had lived at Pontigny Abbey in Burgundy. His first episcopal act was to absolve the King, who swore an oath (which he almost immediately violated) guaranteeing that unjust laws should be repealed and the liberties granted by Henry I should be observed.

Stephen now became a leader in the struggle against King John. At a council of churchmen at Westminster on 25 August 1213, to which certain barons were invited, he read the text of the charter of Henry I and called for its renewal. In the sequel, Stephen's energetic leadership and the barons' military strength forced John to grant his seal to Magna Carta (15 June 1215). [8]

Since King John now held his kingdom as a fief of the Holy See the Pope espoused his cause and excommunicated the barons. For refusing to publish the excommunication Stephen was suspended from all ecclesiastical functions by the papal commissioners and on 4 November this sentence was confirmed by the Pope, although Stephen appealed to him in person. He was released from suspension the following spring on condition that he keep out of England until peace was restored, and he remained abroad till May 1218. Meanwhile, both Pope Innocent and King John died and all parties in England rallied to the support of Henry III.

Stephen Langton continued under Henry's reign to work for the political independence of England. In 1223 he again appeared as the leader and spokesman of the barons, who demanded that King Henry confirm the charter. He went to France on Henry's behalf to call on Louis VIII of France for the restoration of Normandy, and later he supported Henry against rebellious barons. He obtained a promise from the new pope, Honorius III, that during his lifetime no resident papal legate should be again sent to England, and won other concessions from the same pontiff favourable to the English Church and exalting the see of Canterbury.

Of great importance in the ecclesiastical history of England was a council which Stephen opened at Osney on 17 April 1222; its decrees, known as the Constitutions of Stephen Langton, are the earliest provincial canons which are still recognised as binding in English Church courts.

Stephen Langton died at Slindon, near Chichester, Sussex, on 9 July 1228. He was buried in open ground beside the south transept of Canterbury Cathedral. St Michael's Chapel was later built over this ground (now the Buffs Regimental Chapel), and the head of his tomb projects into the east end of this chapel, under its altar, with the foot outside it.

Stephen was a prolific writer. Glosses, commentaries, expositions, and treatises by him on almost all the books of the Old Testament, and many sermons, are preserved in manuscript at Lambeth Palace, at Oxford and Cambridge, and in France.

According to F. J. E. Raby, "There is little reason to doubt that Stephen Langton ... was the author" of the famous sequence Veni Sancte Spiritus . [9]

The only other of his works which has been printed, besides a few letters (in The Historical Works of Gervase of Canterbury , ed. W. Stubbs, ii. London, 1880, Rolls Series, no. 71, appendix to preface) is a Tractatus de translatione Beati Thomae (in J. A. Giles's Thomas of Canterbury, Oxford, 1845), which is probably an expansion of a sermon he preached in 1220, on occasion of the translation of the relics of Thomas Becket; the ceremony was the most splendid that had ever been seen in England. He also wrote a life of Richard I, and other historical works and poems are attributed to him.

Chapters of the Bible

Classically, scrolls of the books of the Bible have always been divided by blank spaces at the end (petuhoth) or middle (setumoth) of the lines. However, Langton is believed [10] to be the one who divided the Bible into the standard modern arrangement of chapters. While Cardinal Hugo de Sancto Caro is also known to have come up with a systematic division of the Bible (between 1244 and 1248), it is Langton's arrangement of the chapters that remains in use today. [11]

Magna Carta Libertatum, commonly called Magna Carta, is a royal charter of rights agreed to by King John of England at Runnymede, near Windsor, on 15 June 1215. First drafted by Archbishop of Canterbury, Cardinal Stephen Langton, to make peace between the unpopular king and a group of rebel barons, it promised the protection of church rights, protection for the barons from illegal imprisonment, access to swift justice, and limitations on feudal payments to the Crown, to be implemented through a council of 25 barons. Neither side stood behind their commitments, and the charter was annulled by Pope Innocent III, leading to the First Barons' War. 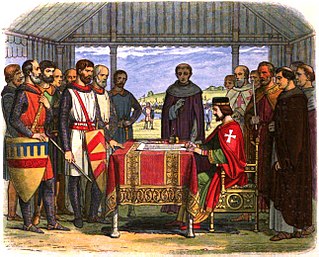 Year 1215 (MCCXV) was a common year starting on Thursday of the Julian calendar.

Niccolò de Romanis was an Italian cardinal and Papal legate. He was Bishop of Frascati from either 1204 or 1205 and Grand penitentiary. He was closely associated with Pope Honorius III as administrator and diplomat. Dean of the College of Cardinals from 1211.

Walter de Gray was an English prelate and statesman who was Archbishop of York from 1215 to 1255 and Lord Chancellor from 1205 to 1214. His uncle was John de Gray, who was a bishop and royal servant to King John of England. After securing the office of chancellor, the younger Gray was a supporter of the king throughout his struggles and was present at the signing of Magna Carta in 1215. After two unsuccessful elections to a bishopric, he became Bishop of Worcester in 1214 but soon after moved to York. During the reign of John's son, King Henry III, Gray continued to serve the king while also being active in his archdiocese. He died in 1255 and was buried at York Minster, where his tomb still survives. 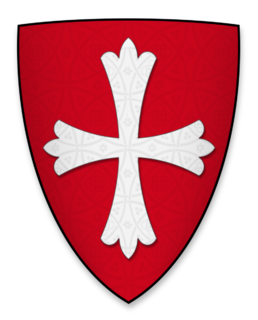 Eustace de Vesci (1169–1216) was an English lord of Alnwick Castle, and a Magna Carta surety. He also held lands in Sprouston, Roxburghshire, Scotland as brother in-law to King Alexander II of Scotland. Eustace was a leader during the Barons' War in 1215 and was killed while undertaking a siege of Barnard Castle in 1216.

Guala Bicchieri was an Italian diplomat, papal official and cardinal. He was the papal legate in England from 1216 to 1218, and took a prominent role in the politics of England during King John’s last years and Henry III’s early minority.

William de Cornhill was a medieval Bishop of Coventry.

Henry de Loundres was an Anglo-Norman churchman who was Archbishop of Dublin, from 1213 to 1228. He was an influential figure in the reign of John of England, an administrator and loyalist to the king, and is mentioned in the text of Magna Carta, the terms of which he helped to negotiate.

The Canterbury election of 1205 was a contested election to the Archbishopric of Canterbury that led to the long quarrel between King John of England and Pope Innocent III.

Desiderius was a prelate in the Kingdom of Hungary in the 12th and 13th centuries, who served as Bishop of Csanád between 1202 and 1228. Before that he functioned as chancellor in the royal court of King Emeric.