Stephen Whitefield Sykes (1 August 1939 – 24 September 2014) was a Church of England bishop and academic specialising in divinity. He was Van Mildert Professor of Divinity at Durham University from 1974 to 1985, and Regius Professor of Divinity at Cambridge University from 1985 to 1990. Between from 1990 and 1999, he served as the Bishop of Ely, the diocesan bishop of the Diocese of Ely. He was the Principal of St John's College, Durham from 1999 to 2006. He served as an Honorary Assistant Bishop in the Diocese of Durham during his time as head of St John's College and in retirement.

Sykes was born on 1 August 1939 in Bristol, England; his father was principal of one of the city's theological colleges. [1] He was educated at Monkton Combe School, then an all-boys independent school in Bath, Somerset. [2] He matriculated into St John's College, Cambridge in 1958 to study theology. He graduated from the University of Cambridge with a first class Bachelor of Arts (BA) degree 1961. [3] [4] He then trained for ordination at Ripon Hall, Oxford. [3]

Sykes was ordained deacon in 1964 and priest in 1965. [5] In 1964, he returned to St John's College, Cambridge, his alma mater, as dean of the college chapel. [6] When he moved to Durham in 1974, he became a residentiary canon of Durham Cathedral. Having returned to Cambridge in 1985, he was given a corresponding honorary canonry at Ely Cathedral. [4] He served as a curate of St John the Evangelist's Church, Cambridge, from 1985 to 1990.

In addition to serving as dean of St John's College, Sykes was a member of the Faculty of Divinity at the University of Cambridge. [4] He was an assistant lecturer in divinity from 1964 to 1968, then a lecturer in divinity from 1968 to 1974. [11] In 1974, he was appointed as the Van Mildert Professor of Divinity at Durham University. In 1985, he returned to Cambridge University to take up the chair of Regius Professor of Divinity. During a break from academia he served as a bishop: he was Bishop of Ely from 1990 to 1999. In 1999, he was appointed the principal of St John's College, Durham. St John's is both a college of Durham University and an Anglican theological college. He retired in 2006. [11]

Following his retirement, Sykes remained living in Durham. [4] In his later years, he developed a neurological condition that confined him to a wheelchair. [1]

In 1962, Sykes married Marianne Hinton, known as Joy. Together they had three children; one son and two daughters. Their son, Richard, is a barrister and both daughters, Joanna and Juliet, trained as teachers. [1]

William Van Mildert was the last palatine or Prince-bishop as Bishop of Durham (1826–1836), and one of the founders of the University of Durham. His name survives in Van Mildert College, founded in 1965 and the Van Mildert Professor of Divinity. 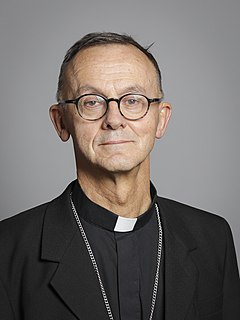 The Van Mildert Professor of Divinity is one of the oldest chairs at Durham University. The chair is named in honour of Bishop William Van Mildert, one of the founders of the university. The holder of the Van Mildert chair, which is jointly funded by the university and Durham Cathedral, is also a residentiary canon at the cathedral and member of its Chapter, thus one of the requirements of post holder is to be an Anglican priest or a minister in another church in communion with Church of England. 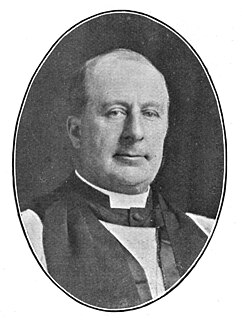 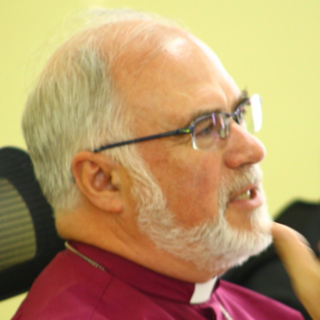 Graham Kings Graham Kings is a retired English Church of England bishop and former Mission Theologian in the Anglican Communion (2015-17). On 22 November 2015 he was licensed as Honorary Assistant Bishop in the Diocese of Southwark, where he currently serves as World Mission Adviser, having previously served at St Matthew’s-at-the-Elephant from September 2017 to February 2019. He was consecrated bishop as the Anglican Bishop of Sherborne on 24 June 2009 at a service in Westminster Abbey.

Robert John Freeman is a British Anglican bishop. From 2011 until his 2018 retirement, he served as the Bishop of Penrith in the Church of England Diocese of Carlisle. Previously, he was the Archdeacon of Halifax from 2003 to 2011. From August 2018 he was appointed as Honorary Assistant Bishop in the Diocese of Leicester.

Martin Alan Seeley is a British Church of England bishop. Since May 2015, he has been the Bishop of St Edmundsbury and Ipswich. From 2006 to 2015, he was the Principal of Westcott House, Cambridge.

Dawson Dawson-Walker was a British Church of England clergyman, classicist, theologian and academic. From 1911 to 1919, he was Principal of St John's College, Durham. From 1919 to his death in 1934, he was Van Mildert Professor of Divinity at Durham University and a Canon Residentiary of Durham Cathedral.