Last updated January 25, 2023
Ecoregion of plain grasslands without trees
This article is about the ecological zone type. For other uses, see Steppe (disambiguation).

Look up steppe in Wiktionary, the free dictionary.

In physical geography, a steppe ( /stɛp/ ) is an ecoregion characterized by grassland plains without trees except near rivers and lakes. [1]

Steppe biomes may include:

A steppe may be semi-arid or covered with grass or with shrubs or with both, depending on the season and latitude. The term "steppe climate" denotes the climate encountered in regions too dry to support a forest but not dry enough to be a desert. Steppe soils are typically of the chernozem type.

Steppes are usually characterized by a semi-arid or continental climate. Extremes can be recorded in the summer of up to 45 °C (115 °F) and in winter, −55 °C (−65 °F). Besides this major seasonal difference, fluctuations between day and night are also very great. In both the highlands of Mongolia and northern Nevada, 30 °C (85 °F) can be reached during the day with sub-freezing readings at night.

Steppe can be classified by climate: [2]

It can also be classified by vegetation type, e.g. shrub-steppe and alpine-steppe.

The Eurasian Grass-Steppe, with its temperate grasslands, savannas, and shrublands, had a role in the spread of the horse, the wheel, and the Indo-European languages. [3] In the eastern Mediterranean space, for example, the Indo-European expansion and diverse invasions of horse-archer civilizations of the steppe eventually led to the rise of Mycenaean Greece by the amalgamation of Indo-Europeans with the autochthonous pre-Greek population [4] and also its destruction (sometimes attributed to the "Dorian invasion" in the Late Bronze Age collapse), followed[ citation needed ] by the demise of the Achaeans, the spread of the Sea Peoples,[ citation needed ] and eventually the rise of Archaic and ultimately Classical Greece.[ citation needed ]

The world's largest steppe region, often referred to as "the Great Steppe", is found in Eastern Europe and Central Asia, and neighbouring countries stretching from Ukraine in the west through Russia, Kazakhstan, Turkmenistan and Uzbekistan to the Altai, Koppet Dag and Tian Shan ranges in China.

The inner parts of Anatolia in Turkey, Central Anatolia and East Anatolia in particular and also some parts of Southeast Anatolia, as well as much of Armenia and Iran are largely dominated by cold steppe.

The Pannonian Plain is another steppe region in Central Europe, centered in Hungary but also including portions of Slovakia, Poland, Ukraine, Romania, Serbia, Croatia, Slovenia, and Austria.

Another large steppe area (prairie) is located in the central United States, western Canada and the northern part of Mexico. The shortgrass prairie steppe is the westernmost part of the Great Plains region. The Columbia Plateau in southern British Columbia, Oregon, Idaho, and Washington state, is an example of a steppe region in North America outside of the Great Plains.

In South America, cold steppe can be found in Patagonia and much of the high elevation regions east of the southern Andes.

Relatively small steppe areas can be found in the interior of the South Island of New Zealand.

In Australia, a moderately sized temperate steppe region exists in the northern and northwest regions of Victoria, extending to the southern and mid regions of New South Wales. This area borders the semi-arid and arid Australian Outback which is found farther inland on the continent.

In Europe, some Mediterranean areas have a steppe-like vegetation, such as central Sicily in Italy, southern Portugal, parts of Greece in the southern Athens area, [5] and central-eastern Spain, especially the southeastern coast (around Murcia), and places cut off from adequate moisture due to rain shadow effects such as Zaragoza.

In Asia, a subtropical steppe can be found in semi-arid lands that fringe the Thar Desert of the Indian subcontinent as well as much of the Deccan Plateau in the rain shadow of the Western Ghats, and the Badia of the Levant.

In Australia, subtropical steppe can be found in a belt surrounding the most severe deserts of the continent and around the Musgrave Ranges.

In North America this environment is typical of transition areas between zones with a Mediterranean climate and true deserts, such as Reno, Nevada, the inner part of California, and much of western Texas and adjacent areas in Mexico.

A biome is a biogeographical unit consisting of a biological community that has formed in response to the physical environment in which they are found and a shared regional climate. Biomes may span more than one continent. Biome is a broader term than habitat and can comprise a variety of habitats.

In geography, a plain, commonly known as flatland, is a flat expanse of land with a layer of grass that generally does not change much in elevation, and is primarily treeless. Plains occur as lowlands along valleys or at the base of mountains, as coastal plains, and as plateaus or uplands. Plains are one of the major landforms on earth, being present on all continents and covering more than one-third of the world's land area. Plains in many areas are important for agriculture. There are various types of plains and biomes on them.

Temperate grasslands, savannas, and shrublands is a terrestrial biome defined by the World Wide Fund for Nature. The predominant vegetation in this biome consists of grass and/or shrubs. The climate is temperate and ranges from semi-arid to semi-humid. The habitat type differs from tropical grasslands in the annual temperature regime as well as the types of species found here.

The Global 200 is the list of ecoregions identified by the World Wide Fund for Nature (WWF), the global conservation organization, as priorities for conservation. According to WWF, an ecoregion is defined as a "relatively large unit of land or water containing a characteristic set of natural communities that share a large majority of their species dynamics, and environmental conditions". For example, based on their levels of endemism, Madagascar gets multiple listings, ancient Lake Baikal gets one, and the North American Great Lakes get none. 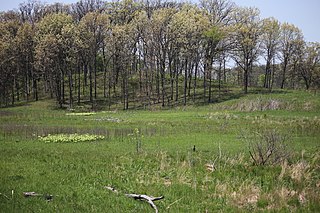 A grassland is an area where the vegetation is dominated by grasses (Poaceae). However, sedge (Cyperaceae) and rush (Juncaceae) can also be found along with variable proportions of legumes, like clover, and other herbs. Grasslands occur naturally on all continents except Antarctica and are found in most ecoregions of the Earth. Furthermore, grasslands are one of the largest biomes on earth and dominate the landscape worldwide. There are different types of grasslands: natural grasslands, semi-natural grasslands, and agricultural grasslands. They cover 31–69% of the Earth's land area.

A savanna or savannah is a mixed woodland-grassland ecosystem characterised by the trees being sufficiently widely spaced so that the canopy does not close. The open canopy allows sufficient light to reach the ground to support an unbroken herbaceous layer consisting primarily of grasses. According to Britannica, there exists four savanna forms; savanna woodland where trees and shrubs form a light canopy, tree savanna with scattered trees and shrubs, shrub savanna with distributed shrubs, and grass savanna where trees and shrubs are mostly nonexistent. 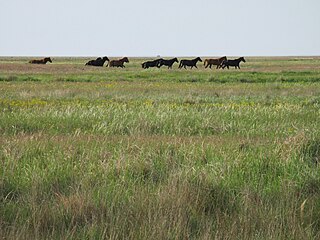 The Pontic–Caspian steppe, formed by the Caspian steppe and the Pontic steppe, is the steppeland stretching from the northern shores of the Black Sea to the northern area around the Caspian Sea. It extends from Dobruja in the northeastern corner of Bulgaria and southeastern Romania, through Moldova and southern and eastern Ukraine, across the Russian Northern Caucasus, the Southern and lower Volga regions to western Kazakhstan, adjacent to the Kazakh steppe to the east, both forming part of the larger Eurasian Steppe. It forms a part of the Palearctic realm and of the temperate grasslands, savannas, and shrublands biome.

The Kazakh Steppe, also called the Great Dala, is a vast region of open grassland in northern Kazakhstan and adjacent portions of Russia. It lies east of the Pontic steppe and west of the Emin Valley steppe, with which it forms part of the Eurasian steppe. The Kazakh Steppe is an ecoregion of the temperate grasslands, savannas, and shrublands biome in the Palearctic realm. Before the mid-nineteenth century it was called the Kirghiz steppe, 'Kirghiz' being an old Russian word for the Kazakhs. 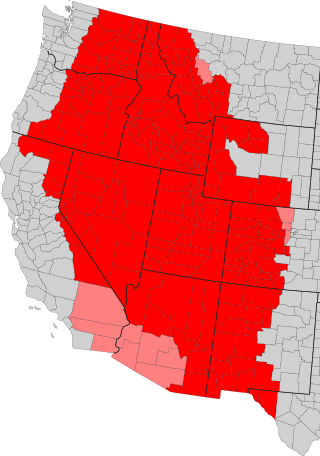 The Intermountain West, or Intermountain Region, is a geographic and geological region of the Western United States. It is located between the front ranges of the Rocky Mountains on the east and the Cascade Range and Sierra Nevada on the west. 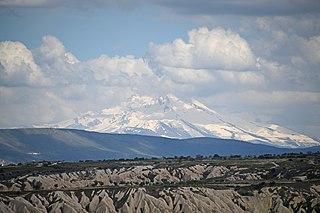 The Central Anatolia Region is a geographical region of Turkey. The largest city in the region is Ankara. Other big cities are Konya, Kayseri, Eskişehir, Sivas, and Aksaray.

The Central Anatolian steppe is a Palearctic ecoregion in the temperate grasslands, savannas, and shrublands biome. It covers an area of 24,934 km2. 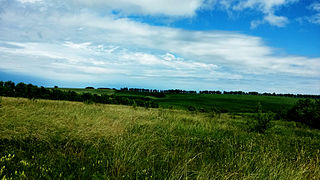 The East European forest steppe ecoregion is a patchwork of broadleaf forest stands and grasslands (steppe) that stretches 2,100 km across eastern Europe from the Ural Mountains in Ural, through Povolzhye, Central Russia to the middle of Ukraine.There are also isolated areas of similar character off the western end in eastern Romania, Moldova, and Bulgaria. The region forms a transition zone between the temperate forests to the north, and the steppe to the south. The forest-steppe is an area of Russia in which precipitation and evaporation are approximately equal. The ecoregion is in the Palearctic realm, with a Humid Continental climate. According to one definition of its boundaries, it covers 727,269 km2 (280,800 sq mi). 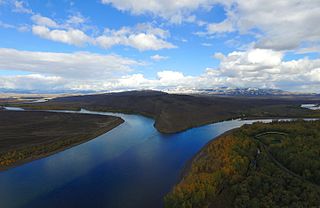 The Sayan intermontane steppe ecoregion is sometimes referred to as a "steppe island", being an expanse of grassland and shrubs surrounded by mountain forests in the Tyva Republic of south central Siberia, Russia. The Altai Mountains are to the west, the Sayan Mountains to the north, and the Tannu-Ola Mountains to the south. The ecoregion is in the temperate grasslands, savannas, and shrublands biome, and the Palearctic realm, with a Humid Continental climate. For much of its length, it follows the course of the upper Yenisei River. It covers 33,928 km2 (13,100 sq mi).

Wikimedia Commons has media related to Steppes .
This page is based on this Wikipedia article
Text is available under the CC BY-SA 4.0 license; additional terms may apply.
Images, videos and audio are available under their respective licenses.