Stevan Larner was a cinematographer and winemaker known for such films as Badlands , The Buddy Holly Story , Caddyshack and Steelyard Blues . [1] [2] [3]

Stevan Robert Harnad is a Hungarian-born cognitive scientist based in Montréal, Canada.

Stevan Dohanos was an artist and illustrator of the social realism school, best known for his Saturday Evening Post covers, and responsible for several of the Don't Talk set of World War II propaganda posters. He named Grant Wood and Edward Hopper as the greatest influences on his painting.

The Candidate is a 1972 American political comedy-drama film starring Robert Redford and Peter Boyle, and directed by Michael Ritchie. The Academy Award–winning screenplay, which examines the various facets and machinations involved in political campaigns, was written by Jeremy Larner, a speechwriter for Senator Eugene J. McCarthy during McCarthy's campaign for the 1968 Democratic presidential nomination.

Whonamedit? is an online English-language dictionary of medical eponyms and the people associated with their identification. Though it is a dictionary, many eponyms and persons are presented in extensive articles with comprehensive bibliographies. The dictionary is hosted in Norway and maintained by medical historian Ole Daniel Enersen.

The men's 3500 metre walk race was held for the only time at the 1908 Summer Olympics in London. The competition was held on Tuesday, July 14, 1908. It was held in two rounds. There were three heats in the first round, with the top three in each heat advancing to the final. 25 racewalkers from eight nations competed. NOCs could enter up to 12 athletes.

Macedonian Radio Television, officially National Radio-Television since 2019, is the public broadcasting organisation of North Macedonia. It was founded in 1993 by the Assembly of the Republic of Macedonia.

Jeremy Larner is an author, poet, journalist and speechwriter. He won an Oscar in 1972 for Best Original Screenplay, for writing The Candidate.

George Edward Larner was an English athlete who competed mainly in the 10-mile walk. He was a multi-time Amateur Athletic Association of England champion, and won two gold medals at the 1908 Summer Olympics in London.

Stevan Jovetić is a footballer who plays as a striker for Monaco and the Montenegro national team. 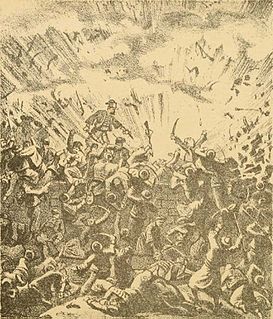 The Battle of Čegar, also known as the Battle of Kamenica was a battle of the First Serbian Uprising between the Serbian Revolutionaries and Ottoman forces near the Niš Fortress on 31 May 1809. Fought on the Čegar hill situated between the villages of Donji Matejevac and Kamenica near Niš in what is today southeastern Serbia, it ended in an Ottoman victory. Commander Stevan Sinđelić famously blew up the gunpowder magazine when the Ottomans overtook his trench, killing everyone in it. Skulls of dead Serb rebels were embedded into the Skull Tower.

The Robert Larner College of Medicine at the University of Vermont is an American medical school located in Burlington, Vermont on the campus of the University of Vermont (UVM). Established in 1822, it is the nation's seventh oldest medical school. The primary teaching hospital for the Larner College of Medicine is the UVM Medical Center in Burlington.

Inherit the Wind is a 1988 American television film adaptation of the play of the same name. The original 1955 play was written as a parable which fictionalized the 1925 Scopes "Monkey" Trial as a means of discussing the 1950s McCarthy trials. This version differed from the two previous films by attempting to make Brady more sympathetic and the storyline "a bit more fair to both sides." 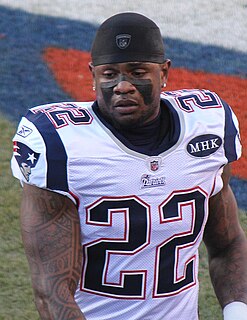 Stevan Todd Ridley is a former American football running back. He played college football at LSU and was drafted by the New England Patriots in the third round of the 2011 NFL Draft. Ridley has also played for the New York Jets, Atlanta Falcons, Denver Broncos, Minnesota Vikings, and Pittsburgh Steelers. With the Patriots, he won Super Bowl XLIX over the Seattle Seahawks.

Stevan K. Pavlowitch is a Serbian British historian, emeritus professor of Balkan history at the University of Southampton and a fellow of the Royal Historical Society.

Liz Larner is an American installation artist and sculptor living and working in Los Angeles.

Monica Larner is a wine critic and author based in Rome. She is the Italian Reviewer for The Wine Advocate and eRobertParker.com, the bimonthly wine publication and website founded by wine critic, Robert Parker. She was selected in 2013 by Parker to replace the departing Antonio Galloni.

Samuel James Larner was an English fisherman and traditional singer from Winterton, a fishing village in Norfolk, England. His life history was the basis for Ewan McColl's song The Shoals of Herring, and his songs continue to be recorded by revival singers.

Wendy Larner is a New Zealand social scientist who has focussed on the interdisciplinary areas of globalisation, governance and gender. She is currently Provost at Victoria University, Wellington, New Zealand. In July 2018 she became the President of the Royal Society Te Apārangi, taking over from Richard Bedford.