Steve Lacy (born Steven Norman Lackritz; July 23, 1934 – June 4, 2004) was an American jazz saxophonist and composer recognized as one of the important players of soprano saxophone. [1] Coming to prominence in the 1950s as a progressive dixieland musician, Lacy went on to a long and prolific career. He worked extensively in experimental jazz and to a lesser extent in free improvisation, but Lacy's music was typically melodic and tightly-structured. Lacy also became a highly distinctive composer, with compositions often built out of little more than a single questioning phrase, repeated several times.

The music of Thelonious Monk became a permanent part of Lacy's repertoire after a stint in the pianist's band, with Monk's works appearing on virtually every Lacy album and concert program; Lacy often partnered with trombonist Roswell Rudd in exploring Monk's work. Beyond Monk, Lacy performed the work of jazz composers such as Charles Mingus, Duke Ellington and Herbie Nichols; unlike many jazz musicians he rarely played standard popular or show tunes.

Lacy began his career at sixteen playing Dixieland music with much older musicians such as Henry "Red" Allen, Pee Wee Russell, George "Pops" Foster and Zutty Singleton and then with Kansas City jazz players like Buck Clayton, Dicky Wells, and Jimmy Rushing. [1] He then became involved with the avant-garde, performing on Jazz Advance (1956), the debut album of Cecil Taylor, [2] : 55  and appearing with Taylor's groundbreaking quartet at the 1957 Newport Jazz Festival; he also made a notable appearance on an early Gil Evans album. [1] His most enduring relationship, however, was with the music of Thelonious Monk: he recorded the first album to feature only Monk compositions ( Reflections , Prestige, 1958) and briefly played in Monk's band in 1960 [3] : 241  and later on Monk's Big Band and Quartet in Concert album (Columbia, 1963).

Lacy's first visit to Europe came in 1965, with a visit to Copenhagen in the company of Kenny Drew; he went to Italy and formed a quartet with Italian trumpeter Enrico Rava [1] and the South African musicians Johnny Dyani and Louis Moholo (their visit to Buenos Aires is documented on The Forest and the Zoo , ESP, 1967). After a brief return to New York, he returned to Italy, then in 1970 moved to Paris, where he lived until the last two years of his life. He became a widely respected figure on the European jazz scene, though he remained less well known in the U.S.

The core of Lacy's activities from the 1970s to the 1990s was his sextet: his wife, singer/violinist Irene Aebi, [2] : 272  soprano/alto saxophonist Steve Potts, [4] pianist Bobby Few, bassist Jean-Jacques Avenel, and drummer Oliver Johnson (later John Betsch). [1] Sometimes this group was scaled up to a large ensemble (e.g. Vespers, Soul Note, 1993, which added Ricky Ford on tenor sax and Tom Varner on French horn), sometimes pared down to a quartet, trio, or even a two-saxophone duo. He played duos with pianist Eric Watson. Lacy also, beginning in the 1970s, became a specialist in solo saxophone; he ranks with Sonny Rollins, Anthony Braxton, Evan Parker, and Lol Coxhill in the development of this demanding form of improvisation.

Lacy was interested in all the arts: the visual arts and poetry in particular became important sources for him. [1] Collaborating with painters and dancers in multimedia projects, he made musical settings of his favourite writers: Robert Creeley, Samuel Beckett, Tom Raworth, Taslima Nasrin, Herman Melville, Brion Gysin and other Beat writers, including settings for the Tao Te Ching and haiku poetry. As Creeley noted in the Poetry Project Newsletter, "There's no way simply to make clear how particular Steve Lacy was to poets or how much he can now teach them by fact of his own practice and example. No one was ever more generous or perceptive."

He also collaborated with a wide range of musicians, from traditional jazz to the avant-garde to contemporary classical music. Outside of his regular sextet, his most regular collaborator was pianist Mal Waldron, [3] : 244–245  with whom he recorded a number of duet albums [4] (notably Sempre Amore , a collection of Ellington/Strayhorn material, Soul Note, 1987).

Lacy played his 'farewell concerts to Europe' in Belgium, in duo and solo, for a small but motivated public. This happened in Brussels, Antwerp, Ghent, Bruges and Mons. In duo he played with Fred Van Hove, Joëlle Léandre, Mikhail Bezverkhni, Irène Aebi, Frederic Rzewski, Christopher Culpo and the dancer Shiro Daimon. This recollection is published by Naked Music, Afkikker, Ghent. In Ghent he played with the classical violinist Mikhail Bezverkhni, winner of Queen Elisabeth Concours. Two of these concerts were organized by Rita De Vuyst, his last muse in Europe, to whom he dedicated his solo CD Mother Goose solo @ afkikker. This CD is published within the book, Bone, a tribute to Lacy. He returned to the United States in 2002, where he began teaching at the New England Conservatory of Music in Boston, Massachusetts. One of his last public performances was in front of 25,000 people at the close of a peace rally on Boston Common in March 2003, shortly before the US-led invasion of Iraq.

After Lacy was diagnosed with liver cancer in August 2003, he continued playing and teaching until weeks before his death on June 4, 2004, at the age of 69. [1] 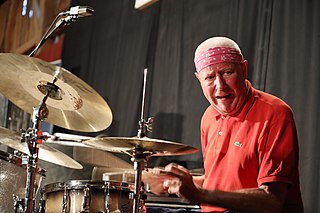 Han Bennink is a Dutch drummer and percussionist. On occasion his recordings have featured him playing soprano saxophone, bass clarinet, trombone, violin, banjo and piano.

Misha Mengelberg was a Dutch jazz pianist and composer. A prominent figure in post-WWII European Jazz, Mengelberg is known for his forays into free improvisation, for bringing humor into his music, and as a leading interpreter of songs by fellow pianists Thelonious Monk and Herbie Nichols. 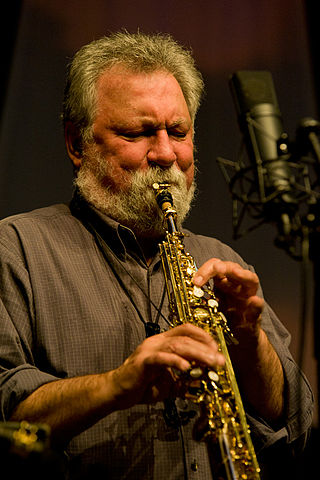 Bobby Few was an American jazz pianist and vocalist.

Franz Koglmann is an Austrian jazz composer. He performs on both the trumpet and flugelhorn in a variety of contexts, most often within avant-garde jazz and third stream contexts. An award-winning composer, Koglmann has performed or recorded with a variety of musicians, including Lee Konitz, Paul Bley, Bill Dixon, Georg Gräwe, Andrea Centazzo, Theo Jörgensmann, Wolfgang Reisinger, Enrico Rava, Yitzhak Yedid, Ran Blake, John Lindberg and many others. When the Romanian town of Sibiu commissioned Koglmann to write a piece, he brought together bits from Haydn's 27th symphony with a tape recording of Sibiu native Emil Cioran philosophisizing. In 2003, he received the highest Austrian jazz award, the Hans Koller Prize, in the category "album of the year".

Monk's Dream is an album by Steve Lacy and Roswell Rudd released on the Verve label in 2000. It features performances by Lacy, Rudd, Jean-Jacques Avenel, John Betsch and Irene Aebi's vocals on two tracks.

Kent Carter is an American jazz bassist. His father, Alan Carter, founded the Vermont Symphony Orchestra. He is also the grandson of American artist, Rockwell Kent. He worked in Steve Lacy's group, played on the two Jazz Composer's Orchestra albums and released albums for Emanem Records.

Radu Malfatti is an Austrian trombone and harmonica player, and composer. He was born in Innsbruck, in the province of Tyrol, on December 16, 1943. Malfatti is associated with the style of music known as reductionism and has been described as "among the leaders in redefining the avant-garde as truly on-the-edge art." His work "since the early nineties... has been investigating the edges of ultraminimalism in both his composed and improvised work." He also operates B-Boim, a CD-R-only record label focusing on improvised and composed music, much of it his own.

Irene Aebi is a Swiss singer, violinist and cellist. She is noted for her work with jazz saxophonist Steve Lacy, her husband, from the 1960s to his death in 2004. 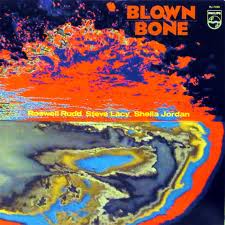 Blown Bone is an album by trombonist Roswell Rudd. It was recorded in March 1976 at Blue Rock Studios in New York City, and was released on LP by Philips Japan in 1979. On the album, Rudd is joined by clarinetist Kenny Davern, saxophonists Steve Lacy and Tyrone Washington, trumpeter Enrico Rava, vocalist Sheila Jordan, pianist Patti Bown, guitarist and vocalist Louisiana Red, bassist Wilbur Little, and drummers Jordan Steckel and Paul Motian. The album was reissued on CD by Emanem Records in 2006 with a different track sequence, and with an additional track recorded in 1967 featuring another ensemble.