Stephen Douglas Sabol (October 2, 1942 –September 18, 2012)[ citation needed ] was an American filmmaker. He was the president and one of the founders of NFL Films, along with his father Ed. He was also a widely exhibited visual artist.[ citation needed ]

Sabol was born in Moorestown, New Jersey, and attended Colorado College, where he majored in art history and was an All-Rocky Mountain Conference[ citation needed ] football as a running back [1] and was a member of the Kappa Sigma fraternity. [2]

He was the subject of a humorous article about his self-promotion exploits in the November 22, 1965, issue of Sports Illustrated . [3]

After graduation, he began his career in 1964 as a cameraman alongside his father Ed Sabol (1916–2015) when his father got the filming rights to the 1962 NFL Championship Game, played in Yankee Stadium.[ citation needed ] With his degree in art history and experience playing football, Sabol was, as his father put it, "uniquely qualified to make football movies."[ citation needed ]

This company eventually grew into NFL Films, with Sabol serving mainly as a cameraman, editor, and writer in the 1960s and 1970s. When ESPN was founded in 1979, they soon signed NFL Films as a production company and Sabol became an on-air personality in the 1980s. He won 35 Emmy Awards and had a documentary about him air on 60 Minutes .[ citation needed ] Sabol played a part in founding the NFL Network.[ citation needed ]

In March 2011, NFL Films was recognized with the Lamar Hunt Award for Professional Football.[ citation needed ]

Sabol was named the 2002 Sports Executive of the Year by Sporting News magazine. Sabol also received the Pete Rozelle Award, which is presented each year to someone who has made an outstanding contribution to the National Football League and to professional football.[ citation needed ]

Sabol and his father, Ed, were honored in 2003 with the Lifetime Achievement Emmy from the National Academy of Television Arts and Sciences for "revolutionizing the way America watches football and setting the standard in sports filmmaking."[ citation needed ]

In 2007, the Pro Football Hall of Fame honored Sabol with the Dan Reeves Pioneer Award. Sabol was the recipient of the 2010 Sports Leadership Award presented to him at the March of Dimes 27th Annual Sports Luncheon.[ citation needed ]

Sabol won over 40 Emmys during his time with NFL Films.[ citation needed ]

Sabol was married for over a decade to his first wife, Lisa, mother of his only son, Casey Sabol. After their divorce, Lisa married John DeBella. Sabol then married his second wife, Penny Sabol. He was of Romanian descent. [5]

Sabol was the author of the poem "The Autumn Wind", later adopted by the Oakland Raiders as an unofficial anthem.[ citation needed ]

On September 18, 2012, Sabol died of brain cancer in Moorestown, New Jersey, 18 months after being diagnosed with an inoperable brain tumor in March 2011. He died two weeks before his 70th birthday, and a week after his father's (Ed Sabol) 96th. [6] He was honored before every NFL game in Week 3 with a video tribute. [7]

The NFL paid tribute to his life and contributions to the league, at a ceremony on February 12, 2013, in Philadelphia. [8] 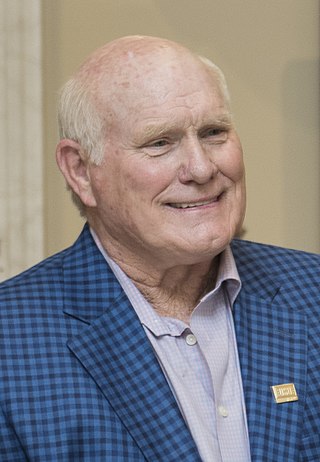 Terry Paxton Bradshaw is an American former professional football player who was a quarterback for the Pittsburgh Steelers in the National Football League (NFL). Since 1994, he has been a television sports analyst and co-host of Fox NFL Sunday. Bradshaw is also an actor and recording artist, having participated in several television shows and films, most notably co-starring in the movie Failure to Launch, and releasing several country music albums. He played for 14 seasons with Pittsburgh, won four Super Bowl titles in a six-year period, becoming the first quarterback to win three and four Super Bowls, and led the Steelers to eight AFC Central championships. He was inducted into the Pro Football Hall of Fame in 1989, his first year of eligibility. Bradshaw was inducted into the College Football Hall of Fame in 1996.

The Pro Football Hall of Fame is the hall of fame for professional American football, located in Canton, Ohio. Opened on September 7, 1963, the Hall of Fame enshrines exceptional figures in the sport of professional football, including players, coaches, officials, franchise owners, and front-office personnel, almost all of whom made their primary contributions to the game in the National Football League (NFL). 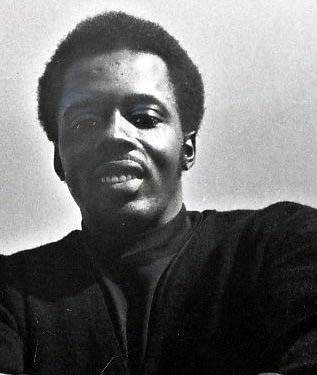 David D. "Deacon" Jones was an American football defensive end. He played in the National Football League (NFL) for the Los Angeles Rams, San Diego Chargers, and the Washington Redskins. He was inducted into the Pro Football Hall of Fame in 1980. 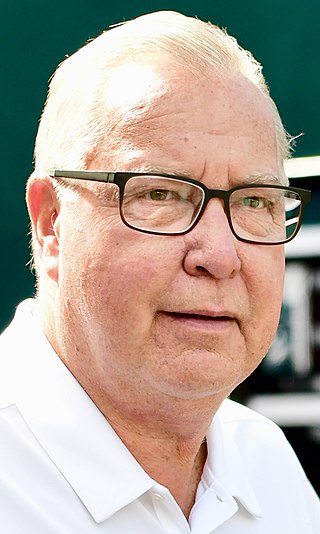 Ronald Vincent Jaworski, nicknamed Jaws, is an American former professional football player who was a quarterback in the National Football League (NFL) from 1973 to 1989 during which he played for the Los Angeles Rams, Philadelphia Eagles, Miami Dolphins, and Kansas City Chiefs. As quarterback of the Philadelphia Eagles in 1981, Jaworski led the Eagles to their first ever Super Bowl appearance in Super Bowl XV.

John Thomas Ralph Augustine James Facenda was an American broadcaster and sports announcer. He was a fixture on Philadelphia radio and television for decades, and achieved national fame as a narrator for NFL Films and Football Follies. Through his work with NFL Films, Facenda was known by many National Football League fans as "The Voice of God". 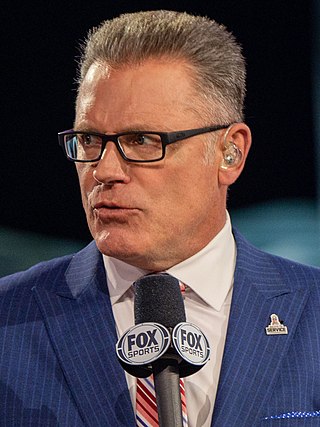 Howard Matthew Moses Long is an American sports analyst and former professional football player. He played in the National Football League (NFL) for 13 seasons as a defensive end, spending his entire career with the Raiders franchise in Oakland and Los Angeles. Selected by the Raiders in the second round of the 1981 NFL Draft, Long received eight Pro Bowl and three first-team All-Pro selections while helping the team win a Super Bowl title in Super Bowl XVIII over the Washington Redskins. He was inducted into the Pro Football Hall of Fame in 2000.

NFL Productions, LLC, doing business as NFL Films, is the film and television production company of the National Football League. It produces commercials, television programs, feature films, and documentaries for and about the NFL, as well as other unrelated major events and awards shows. Founded as Blair Motion Pictures by Ed Sabol in 1962 and run by his son Steve Sabol until his death, it produces most of the NFL's filmed and videotaped content except its live game coverage, which is handled separately by the individual networks. NFL Films is based in Mount Laurel, New Jersey.

Eric Andre Allen is an American football coach and former cornerback who played in the National Football League (NFL) for the Philadelphia Eagles, New Orleans Saints, and Oakland Raiders from 1988 to 2001. A six-time Pro Bowl selection, Allen retired from football after the 2001 season and is currently an NFL analyst for Pac-12 Networks. In his NFL career, he recorded 54 interceptions for 827 yards and eight touchdowns, while also recovering seven fumbles. His 54 interceptions ties him for 21st in NFL history. He now lives in San Diego, California with his wife Lynn Allen, with whom he has four children. 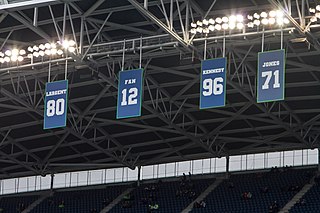 Cortez Kennedy was an American professional football player who was a defensive tackle for his entire 11-season career with the Seattle Seahawks of the National Football League (NFL). He was inducted into the Pro Football Hall of Fame in 2012. He redefined and expanded the possibilities of how a large-bodied interior lineman could be used. In 1992, he won the Defensive Player of the Year award despite his team finishing 2–14. 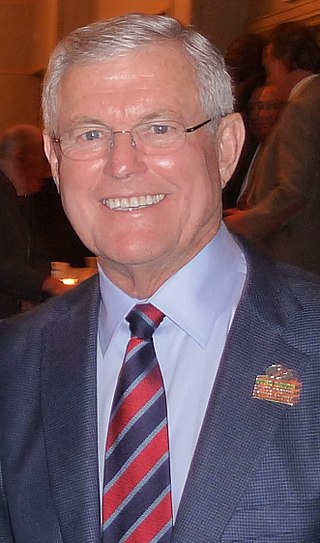 Richard Albert Vermeil is a former American football coach who served as a head coach in the National Football League (NFL) for 15 seasons. He was the head coach of the Philadelphia Eagles for seven seasons, the St. Louis Rams for three, and the Kansas City Chiefs for five. Prior to the NFL, he was the head football coach at Hillsdale High School from 1960 to 1962, Napa Junior College in 1964, and UCLA from 1974 to 1975. With UCLA, Vermeil led the team to victory in the 1976 Rose Bowl. Vermeil's NFL tenure would see him improve the fortunes of teams that had a losing record before he arrived and bring them all to the playoffs by his third season, which included a Super Bowl title with the Rams. 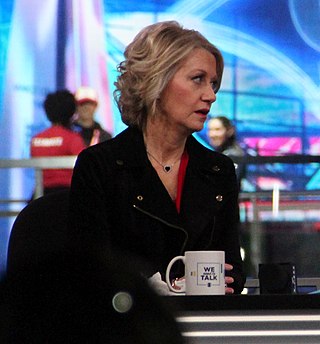 Arthur Ignatius McNally was an American football executive who was director of officiating for the National Football League (NFL) from 1968 to 1991. Before becoming director of officiating—succeeding Mark Duncan, who had held the position from 1964 to 1968—McNally served as a field judge and referee in the NFL for nine years from 1959 to 1967. During a 22-year span, he officiated over 3,000 football, baseball, and basketball games, which included one year in the National Basketball Association (NBA). In 2022, McNally became the first NFL game official to be enshrined into the Pro Football Hall of Fame.

Alex "Allie" Sherman was an American football player and coach who played 51 games in six seasons in the National Football League (NFL) as a quarterback and defensive back, and afterward served as head coach of the Winnipeg Blue Bombers of the Canadian Football League (CFL) and of the New York Giants of the NFL. He later worked as a cable television and sports marketing executive and media personality.

Edwin Milton Sabol was an American filmmaker and the founder of NFL Films. He was elected to the Pro Football Hall of Fame in 2011 as a contributor due to his works with NFL Films.

Ray Didinger is an American sportswriter, radio personality, sports commentator author and screenwriter. He is a member of the Pro Football Hall of Fame as part of the Writer's Honor Roll. 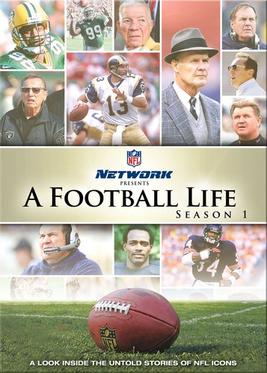 A Football Life is an American documentary series of 116 episodes, developed by NFL Films and aired on NFL Network that documents the lives of select National Football League (NFL) players, coaches, owners, and teams. Friends, teammates, family members and other players and coaches associated with the subjects are interviewed.

David Robidoux is an American score composer. He writes film scores for various sporting films and networks, and primarily composes for NFL Films.

Tom Hedden is an American score composer, the former music director at NFL Films, and National Football League Director of Music Administration. In 2009, Hedden left the NFL and has since composed music independently for, among others, NASCAR Media Group, Golf Channel, World Poker Tour, Hock Films, ESPN and The SEC Network.