The Stockholm City Hall (Swedish : Stockholms stadshus or Stadshuset locally) is the building of the Municipal Council for the City of Stockholm in Sweden. It stands on the eastern tip of Kungsholmen island, next to Riddarfjärden's northern shore and facing the islands of Riddarholmen and Södermalm. It houses offices and conference rooms as well as ceremonial halls, and the luxury restaurant Stadshuskällaren. It is the venue of the Nobel Prize banquet and is one of Stockholm's major tourist attractions.

In 1907 the city council decided to build a new city hall at the former site of Eldkvarn. An architectural contest was held which in the first stage resulted in the selection of drafts by Ragnar Östberg, Carl Westman, Ivar Tengbom jointly with Ernst Torulf, and Carl Bergsten. After a further competition between Westman and Östberg the latter was assigned to the construction of the City Hall, while the former was asked to construct Stockholm Court House. Östberg modified his original draft using elements of Westman's project, including the tower. During the construction period, Östberg constantly reworked his plans, resulting in the addition of the lantern on top of the tower, and the abandonment of the blue glazed tiles for the Blue Hall.

Oskar Asker was employed as construction leader and Paul Toll, of the construction company Kreuger & Toll, designed the foundations. Georg Greve also assisted in preparing the plans. [3] The construction took twelve years, from 1911 to 1923. Nearly eight million red bricks were used. The dark red bricks, called "munktegel" (monks's brick) because of their traditional use in the construction of monasteries and churches, were provided by Lina brick factory near Södertälje. Construction was carried out by craftsmen using traditional techniques.

The site, adjacent to Stadshusbron, being bordered by the streets of Hantverkargatan and Norr Mälarstrand to the north and west, and the shore of Riddarfjärden to the south and east, allowed for a spacious layout. The building follows a roughly rectangular ground plan. It is built around two open spaces, a piazza called Borgargården on the eastern side, and the Blue Hall (Blå hallen) to the west.

The Blue Hall, with its straight walls and arcades, incorporates elements of a representative courtyard. [4] Its walls are in fact without blue decorations, but it has kept its name after Östberg's original design. It is known as the dining hall used for the banquet held after the annual Nobel Prize award ceremony. The organ in the Blue Hall is with its 10,270 pipes the largest in Scandinavia. Above the Blue Hall lies the Golden Hall (Gyllene Salen), named after the decorative mosaics made of more than 18 million tiles. The mosaics make use of motifs from Swedish history. They were executed by the Berlin, Germany, firm of Puhl & Wagner (Gottfried Heinersdorff), after nine years of negotiations by Gottfried Heinersdorff (1883-1941) for the commission.

The southeast corner of the building, immediately adjacent to the shore, is marked by a monumental tower crowned by the Three Crowns, an old national symbol for Sweden. The tower is 106 metres high and is accessible by an elevator or by a stair of 365 steps. The eastern side of its base is decorated with a gold-plated cenotaph of 13th century Swedish statesman Birger Jarl.

Stadshuset is considered one of Sweden's foremost examples of national romanticism in architecture. The unique site, overlooking Riddarfjärden, inspired a central motif of the construction, namely the juxtaposition of city architecture and water that also represents a central feature of Stockholm's cityscape as a whole. The architectural style is one of refined eclecticism, blending massive, austere, North European brick construction and playful elements reminiscent of oriental and venetian architecture, such as turrets adorned with golden starlets, decorated balconies, wooden masts, and statues.

The small park between the building and Lake Mälaren's shore is adorned with several sculptures, among them Carl Eldh's ensemble representing the three artists August Strindberg, Gustaf Fröding and Ernst Josephson, as well as Eldh's bronze sculptures "Sången" and "Dansen" ("The Song" and "The Dance"). To the south-east of the City Hall, facing Riddarholmen, is a pillar roughly 20 meters tall with a statue of Engelbrekt Engelbrektsson on top. 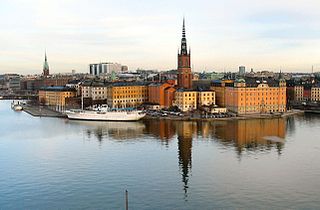 Riddarholmen is a small islet in central Stockholm, Sweden. The island forms part of Gamla Stan, the old town, and houses a number of private palaces dating back to the 17th century. The main landmark is the church Riddarholmskyrkan, used as Sweden's royal burial church from the 17th century to 1950, and where a number of earlier Swedish monarchs also lie buried.

Södermalm, often shortened to just Söder, is a district and island in central Stockholm.

Ivar Justus Tengbom was a Swedish architect and one of the best-known representatives of the Swedish neo-classical architecture of the 1910s and 1920s.

Centralbron is one of the major traffic routes in central Stockholm, Sweden, connecting the northern district Norrmalm to the southern Södermalm.

Liljevalchs konsthall is an art gallery located on the Djurgården island in Stockholm, Sweden. Designed by architect Carl Bergsten (1879–1935) and inaugurated in March 1916, it is today owned by the City of Stockholm.

Birger Jarls torn is a defensive tower on the northwest corner of Riddarholmen, an islet in Gamla Stan, the old town of Stockholm.

This article covers the architecture of Sweden from a historical perspective.

Ernst Carl Westman was a Swedish architect and interior designer. He was an early adopter of the National Romantic Style, but turned later to the neo-classical style of the 1920s. 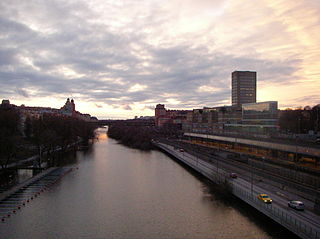 Barnhusviken is a body of water in central Stockholm, Sweden. Separating the island Kungsholmen from the mainland district Norrmalm north of it, it connects Karlbergssjön to Klara Sjö. 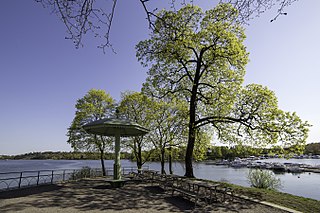 Bellevue (Bellevueparken) is a park in central Stockholm, Sweden. Bellevue borders to Vasastan and is part of the Royal National City Park.

The Golden Hall is a banqueting hall in Stockholm City Hall. Measuring 44-metre (144 ft) in length, it received its name when its walls were decorated by mosaics created by the artist Einar Forseth on a proposal by the City Hall architect Ragnar Östberg. The hall is best known as the location of the ball after the annual Nobel Banquet in the City Hall's Blue Hall.

The Blue Hall is the main hall of the Stockholm City Hall best known as the banquet hall for the annual Nobel Banquet, and also used for state visits, student balls, jubilees and other large events.

Högalid Church is a protected church located in the Södermalm district of Stockholm, Sweden. It was designed by architect Ivar Tengbom. Built upon elevated ground 1916–1923, in a barren area later turned into a park, it is one of the most prominent buildings in the city, complementing the contemporary Stockholm City Hall on the opposite side of Riddarfjärden. The church is considered one of Sweden's foremost examples of the National Romantic architectural style.

The Great Stockholm Fire of 1759 was the city’s greatest fire since 1686. It raged in the Eastern Södermalm on Thursday July 19 and over the following night, reduced about 20 blocks with about 300 houses to ash, and rendered about 2000 persons homeless. While no deaths were reported, there were 19 injuries. In Sweden, the fire is named Mariabranden after the Maria Magdalena Church, which was severely damaged. Outside Sweden, the fire is most famous because an occult anecdote claims the scientist and mystic Emanuel Swedenborg by a sort of clairvoyance could ”see” the fire from Gothenburg.