Blyden was born in Reykjavík, Iceland. His father, Baldvin, is an Icelandic baker and his mother, Deborah, a Cuban fitness instructor. Blyden began drumming at an early age. [1]

For his musical artist name, he chose Stony, which is a rough translation of the second part of his Icelandic name, Thorsteinn, "Thor stone." Using a camera he borrowed from his father he started filming him and his friends covering various songs. He then went on to upload his own drum covers to YouTube under the name Stony's World. He also created pop-inspired remixes of the Jake and Amir comedy web series produced by CollegeHumor, receiving millions of views on YouTube and a substantial number of purchases on ITunes. In a collaboration with Jake and Amir in 2019, Blyden stated that the proceeds from these remixes "got [him] through school" and that he continues to receive money from the songs to this day. [2] As an actor, Blyden has appeared in the films The Standoff and Hope Springs Eternal , as well as the Hulu television series Casual . [3] He stars in the 2017 Nickelodeon television series Hunter Street . [4] 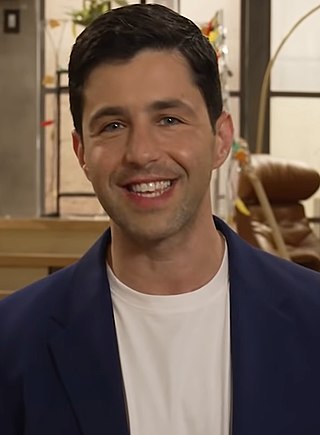 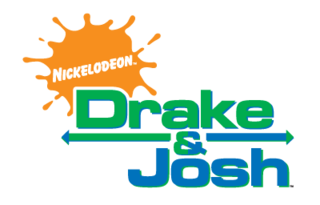 Drake & Josh is an American teen sitcom created by Dan Schneider for Nickelodeon. The series follows two teenage stepbrothers Drake Parker and Josh Nichols as they live together despite opposite personalities. The series also stars Nancy Sullivan, Jonathan Goldstein, and Miranda Cosgrove.

LazyTown is an Icelandic children's television series created by aerobics champion Magnús Scheving. The show was designed to encourage healthy lifestyles. The series was based on Scheving's stage plays Áfram Latibær! and Glanni Glæpur í Latabæ. Every episode was filmed in Garðabær.

CollegeHumor is an Internet comedy company based in Los Angeles. Aside from producing content for release on YouTube, it was also a former humor website owned by InterActiveCorp (IAC) from 2006 until January 2020, when IAC withdrew funding and the website shut down. Since then, CollegeHumor has continued to release content on YouTube and its streaming service, Dropout. The site featured daily original humor videos and articles created by its in-house writing and production team, in addition to user-submitted videos, pictures, articles and links. Created by Josh Abramson and Ricky Van Veen in 1999, CollegeHumor is operated by CH Media, which also operates Dorkly.com and Dropout.tv, and formerly operated Drawfee.com. 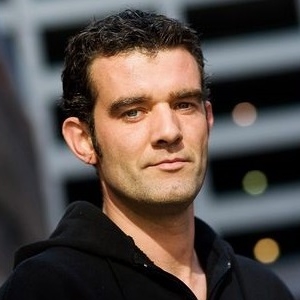 Stefán Karl Stefánsson was an Icelandic actor and singer. He was best known for portraying Robbie Rotten, the antagonist of the children's television series LazyTown.

Robbie Rotten is a fictional character and the main antagonist of the Icelandic children's program LazyTown. He is also the series' primary comic relief character. He is a ruthless, selfish and lazy, yet goofy, eccentric and silly supervillain, and the arch-nemesis of the series' main protagonists, Sportacus and Stephanie, who promote exercise, healthy eating and an active and healthy lifestyle. As for Robbie, his favorite pastimes include eating junk food and watching TV. Robbie has fair skin, green-grey eyes, and black hair. He usually wears a two-piece suit of maroon and purple with gold pinstripes, formal shoes, a navy blue shirt with cuffs and cuff links. He is the tallest character.

Jake and Amir is an American comedy duo made up of podcasters and former CollegeHumor writers Jake Hurwitz and Amir Blumenfeld. The duo came into prominence in 2007 when they began writing and starring in the web series Jake and Amir. The program would later be picked up and produced by CollegeHumor. It portrays humorous versions of Jake and Amir, where Jake is usually depicted as a sensible "regular guy" and Amir as his annoying co-worker who engages in bizarre and sometimes surreal hijinks which involuntarily involve Jake, much to his chagrin. 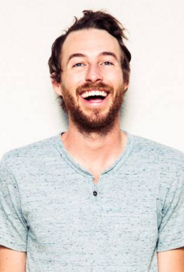 Jacob Penn Cooper Hurwitz is an American comedian, writer, actor, and member of the comedy duo Jake and Amir. He was hired by the comedy website CollegeHumor after becoming an intern there in 2006, and has written and appeared in original videos for the website, as well as contributing articles which have been published both online and in print. He also starred in The CollegeHumor Show, an MTV sitcom that ran for one season in 2009. Outside of CollegeHumor, Hurwitz has hosted Myspace's BFF series. 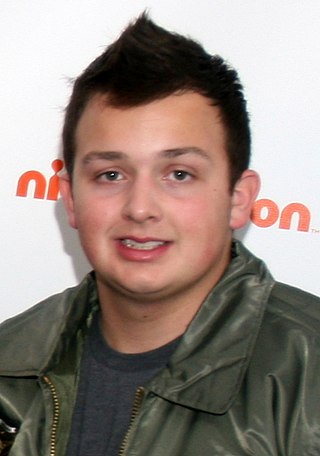 Noah Bryant Munck is an American actor, comedian, YouTube personality and music producer known for his roles as Gibby in the Nickelodeon series iCarly and "Naked Rob" Smith in the ABC comedy series The Goldbergs. He also produces electronic music under the alias NoxiK and creates independent comedy videos on YouTube.

Amir Shmuel Blumenfeld is an Israeli-American comedian, actor, writer, television host, and member of the American comedy duo, Jake and Amir. Born in Israel, he moved to Los Angeles when he was two, and was hired by the New York City-based CollegeHumor in 2005. As well as contributing to its books and articles, he has written and starred in original videos for the comedy website—appearing in series such as Hardly Working and Very Mary-Kate—and was a cast member on its short-lived MTV program The CollegeHumor Show. 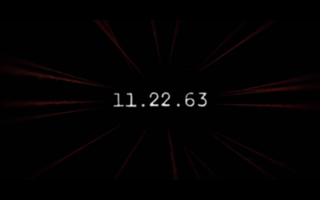 11.22.63 is an American science fiction thriller miniseries based on the 2011 novel 11/22/63 by Stephen King, and consisting of eight episodes, in which a time traveler attempts to stop the assassination of John F. Kennedy. The series is executive-produced by J. J. Abrams, King, Bridget Carpenter, and Bryan Burk, and produced by James Franco, who also starred in the main role. It premiered on Hulu on February 15, 2016, and was received positively by critics.

Benjamin Christopher Flores Jr., also known as Lil' P-Nut, is an American child actor and rapper. In music, he is known for his song "You Might Be the One". In acting, Flores starred as Louie Preston on the Nickelodeon television series The Haunted Hathaways (2013–2015), and as Triple G on the Nickelodeon series Game Shakers (2015–2019).

Jack Davis Griffo is an American actor. He starred as Max Thunderman on the Nickelodeon series The Thundermans (2013–2018). Griffo also had starring roles in the network's original movies Jinxed and Splitting Adam, and the Netflix original series Alexa & Katie. 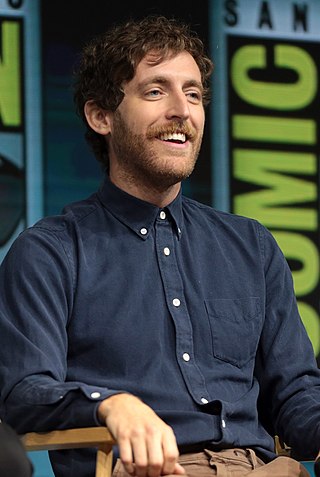 Thomas Steven Middleditch is a Canadian actor, comedian and screenwriter. He is known for his role as Richard Hendricks in the HBO series Silicon Valley (2014–2019), earning a nomination for the Primetime Emmy Award for Outstanding Lead Actor in a Comedy Series. He has voiced Penn Zero in the Disney XD animated series Penn Zero: Part-Time Hero (2014–2017), Harold Hutchins in Captain Underpants: The First Epic Movie (2017), Sam Coleman in Godzilla: King of the Monsters (2019) and Terry in the Hulu adult animated sci-fi series Solar Opposites. Middleditch also appears in ads for Verizon Wireless.

"We Are Number One" is a song from the English-language Icelandic children's television series LazyTown, composed by Máni Svavarsson. The song was featured in the twelfth episode of the show's fourth season, entitled "Robbie's Dream Team", which is the 103rd episode overall. 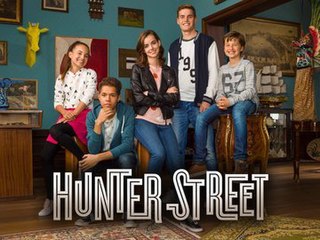 Hunter Street is a comedy adventure television series created by Reint Schölvinck and Melle Runderkamp that aired on Nickelodeon from March 11, 2017 to February 23, 2018, and on TeenNick from July 29 to September 27, 2019. The series stars Stony Blyden, Mae Mae Renfrow, Kyra Smith, Thomas Jansen, and Daan Creyghton as a group of five foster children who must solve a mystery in order to find their missing foster parents. Wilson Radjou-Pujalte and Kate Bensdorp join the cast in the series' second season, and Eliyha Altena and Sarah Nauta join the cast in the series' third season. A fourth season was produced, however, it did not premiere in the United States, airing in the United Kingdom from April 19 to May 20, 2021. 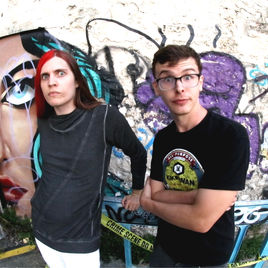 "Asian Jake Paul" is a song by American YouTube personality iDubbbz featuring English YouTube personality and recording artist Boyinaband. The song was written by the two and was produced by Kustom Beats. It is a diss track aimed at fellow YouTube personality RiceGum, who was the subject of an episode of iDubbbz's viral "Content Cop" series. The single was released for digital download on October 3, 2017. It peaked at number 24 on the Billboard R&B/Hip-Hop Digital Song Sales chart.

Jake and Amir is a web series set in CollegeHumor's office in New York City and later Los Angeles where Jake Hurwitz and Amir Blumenfeld play humorous versions of themselves: Jake is usually depicted as a sensible "straight man" and Amir as his annoying, obsessive, and odd co-worker. Running for over eight years, Jake and Amir was CollegeHumor's longest-running series and has amassed approximately one billion views as of April 2017. The series served as the debut of the comedy duo Jake and Amir, who would go on collaborate on other comedy projects.