Strathyre ( /ˌstræθˈaɪər/ ; from Scottish Gaelic : Srath Eadhair) is a district and settlement in the Stirling local government district of Scotland. It forms the south-eastern part of the parish of Balquhidder and was, prior to the 1973 reorganisation of local government, part of Perthshire. It is within the bounds of the Loch Lomond and the Trossachs National Park. In Gaelic, the district is Srath Eadhair and the village is An t-Iomaire Riabhach or an t-Iomaire Fada.

The district of Strathyre extends from east of Balquhidder, following the River Balvaig which flows out of Loch Voil, almost due south to Loch Lubnaig. The River Balvaig is 8 kilometres in length, almost all of which lies in Strathyre. It falls by around 5 metres between Loch Voil and Loch Lubnaig. The A84 road and the route of the former Callander and Oban Railway run through the strath, as does the old 18th century military road.

The Strathyre Forest, which extends well beyond the limits of Strathyre proper, is managed by the Forestry Commission, forming the easternmost part of the Queen Elizabeth Forest Park.

In September 1803 William Wordsworth and his sister Dorothy stayed in the village and took walks in the local hills. Wordsworth was inspired to write his poem The Solitary Reaper following his stay in the village. [1]

The village of Strathyre is largely a Victorian creation, having grown up with the arrival of the Callander and oban railway in the 1870s and the establishment of Strathyre railway station. The resident population recorded by the United Kingdom Census 2001 was around 100. The village is a popular tourist centre, with nearby caravan parks, camp sites and chalets, and canoeing, cycling and walking facilities.

Strathyre has a small primary school with 40 pupils on the roll, drawn from a catchment area which includes Balquhidder. Gaelic is taught in the infant school, French in the upper primary. Local children normally travel to Callander for their secondary education. [2]

Callander is a small town in the council area of Stirling, Scotland, situated on the River Teith. The town is located in the historic county of Perthshire and is a popular tourist stop to and from the Highlands. 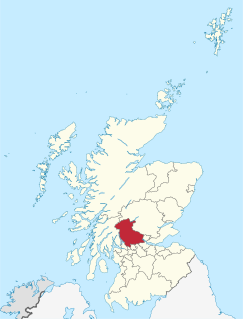 Loch Lubnaig is a small freshwater loch near Callander in the Stirling council area, Scottish Highlands. It lies in the former county of Perthshire. It is part of the Loch Lomond and The Trossachs National Park. The Trossachs generally refers to an area of wooded glens, braes, and lochs lying to the east of Ben Lomond in the Stirling council area of Scotland. The name is taken from that of a small woodland glen that lies at the centre of the area, but is now generally applied to the wider region, and may be derived from the Gaelic for "bristly". A meaning of "places lying athwart (across)" is also a possibility, derived from the Brittonic trōs, "across".

Crianlarich is a village in Stirling council area and in the registration county of Perthshire, Scotland, around 6 miles (10 km) north-east of the head of Loch Lomond. The village bills itself as "the gateway to the Highlands".

Brig o' Turk is a small rural community in the Trossachs, a range of hills in Stirling, Scotland. 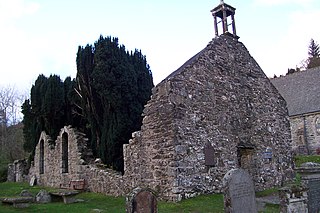 Balquhidder is a small village in the Stirling council area of Scotland. It is overlooked by the dramatic mountain terrain of the 'Braes of Balquhidder', at the head of Loch Voil. Balquhidder Glen is also popular for fishing, nature watching and walking. 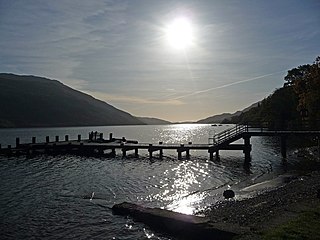 Tarbet is a small village in Argyll and Bute, Scotland. Located within the Loch Lomond and The Trossachs National Park.

Loch Venachar is a freshwater loch in Stirling district, Scotland. 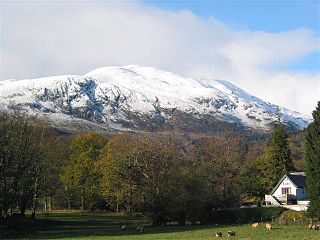 Kilmahog is a hamlet situated half a mile to the west of Callander, Scotland. 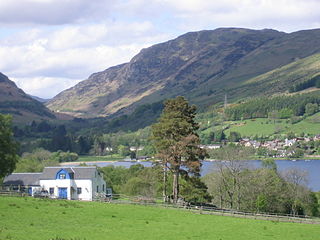 Lochearnhead is a village on the A84 Stirling to Crianlarich road at the foot of Glen Ogle, 14 miles (23 km) north of the Highland Boundary Fault. It is situated at the western end of Loch Earn where the A85 road from Crieff meets the A84.

Strathyre was a railway station located at the head of Loch Lubnaig, Stirling, in Strathyre. 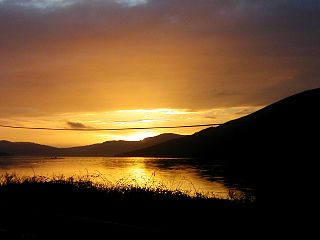 Strachur; and Strathlachlan; are united parishes located on the Cowal peninsula, in Argyll and Bute, Scotland. Strachur is a small village on the eastern coast of Loch Fyne.

Stewart of Balquhidder is a Perthshire branch of the Stewart clan. They are descended from Sir William Stewart of Baldorran, who was the great grandson of Murdoch Stewart, Duke of Albany, executed by King James I of Scotland for treason in 1425. Murdoch Stewart was himself the grandson of King Robert II of Scotland, who founded the Stewart dynasty.

The Rob Roy Way is a Scottish long distance footpath that runs from Drymen in Stirling to Pitlochry in Perth and Kinross. The path was created in 2002, and takes its name from Rob Roy MacGregor, a Scottish folk hero and outlaw of the early 18th century. It traverses countryside that he knew and travelled frequently. The route crosses the Highland Boundary Fault, a geological fault where the Highlands meet the Lowlands. Views from the trail overlook Loch Lubnaig, Loch Earn, Loch Venachar and Loch Tay. The way is 127 kilometres (79 mi) in length if the direct route along the southern shore of Loch Tay and the River Tay is followed between Ardtalnaig and Aberfeldy. An optional loop also links these places via Amulree: choosing this option increases the length by a further 27 kilometres (17 mi) to 154 kilometres (96 mi).

The River Balvaig is a short river approximately 8 km (5.0 mi) long draining from the head of Loch Voil near Balquhidder in Scotland and then passing southwards through the village of Strathyre before flowing into the northern end of Loch Lubnaig.

Queen Elizabeth Forest Park is a 19,665-hectare (48,590-acre) forest park in the Scottish Highlands which extends from the eastern shores of Loch Lomond to the mountains of Strathyre. The forest park is one of six such parks in Scotland, and was established in 1953, the year of the coronation of Elizabeth II. It is owned and managed by Forestry and Land Scotland. 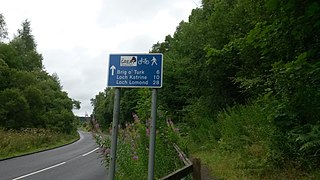 The Great Trossachs Path is a 48 km long distance footpath through the Trossachs, in the Stirling council area of Scotland. It runs between Callander in the east and Inversnaid on the banks of Loch Lomond in the west, passing along the northern shores of Loch Katrine and Loch Arklet. The path is suitable for walkers and cyclists; much of the route is also suitable for experience horse riders, although the middle section along the shoreline of Loch Katrine is tarmacked and so may not be ideal for horses.