Etzel von Oeringen (October 1, 1917 – June 24, 1929), better known as Strongheart, was a male German Shepherd who was one of the early canine stars of feature films.

Born October 1, 1917, Etzel von Oeringen was a male German Shepherd dog bred by a private breeder, Robert Niedhardt of Quedlinburg, Germany. [1] Etzel was trained in Berlin as a police dog and served in the German Red Cross during World War I. [2] His owner was left in poverty after the war, and was unable to even support the dog. Concerned that Etzel would end up in less humane hands, he declined larger offers and instead sent the dog to a friend who operated a reputable kennel in White Plains, New York. [3] At age three, Etzel was brought to the United States to be sold. [4]

At the sixth annual show of the Shepherd Dog Club of America, October 15–16, 1920, Etzel placed third in his class. He was described as "immense in body and hind leg formation, in body and legs a trifle better than either of the dogs above him". [5]

Etzel was seen by film director Laurence Trimble, who had owned and guided Jean, the Vitagraph Dog, the first canine movie star in the United States. Trimble recognized Etzel's potential and persuaded Jane Murfin, a screenwriter for his films, to buy the dog. [3] [4] A new name, Strongheart, was suggested by the publicity department of First National Pictures, which released his first film. [6]

Strongheart's films did much to encourage the popularity of the German Shepherd breed. Strongheart and his mate, Lady Jule, had many offspring and their line survives to this day.[ citation needed ]

In 1929, while being filmed for a movie, Strongheart accidentally made contact with a hot studio light and was burned. These burns caused a tumor to form, which ultimately caused his death. [10] Strongheart died June 24, 1929, at Murfin's home. [2]

In the 1926 picture book Strongheart; The Story of a Wonder Dog, Trimble wrote the story of how Strongheart came to the United States and was chosen for motion pictures, of his training, and of his progress in films culminating with White Fang. [3]

Strongheart's popularity inspired Doyle Packing Company to adopt his name and photograph for a canned dog food in 1932. [18] [19] Strongheart Dog Food did a respectable business, especially in the Midwest, [20] and was available in stores until at least 2002. [21]

J. Allen Boone wrote two books, Letters to Strongheart (1939) [22] and Kinship with All Life (1954), [23] about animal communication and the survival of the dog's soul after death. Both books were reprinted many times and remain classics of the Spiritualist faith. Boone was a Washington Post correspondent who looked after Strongheart for an extended period while Murfin and Trimble were away on business. Boone and Strongheart reportedly formed a deep bond, and Boone believed the dog was a transformational being. [12] : 62–63

Strongheart: The World’s First Movie Star Dog (2014) is a picture book for young audiences by Caldecott Medal winner Emily Arnold McCully. [24] The New York Times praised her "meticulous job of recreating the quicksilver world of that bygone media age. The megaphones, bobbed hair and jodhpurs are all here. And in Etzel, a dog born and bred to be strong and brave, she has given young readers a rare portrait of a Hollywood hero who was just as heroic off-screen as on." [25]

Strongheart: Wonder Dog of the Silver Screen (2018) is a novel for ages 8–12 by Candace Fleming and illustrated by Caldecott Medal winner Eric Rohmann. [26] Kirkus Reviews said, "Like a silent movie plot, Fleming’s narrative is full of adventure, romance, and suspense." [27] The book received a starred review in Booklist. [28]

The German Shepherd or Alsatian is a German breed of working dog of medium to large size. The breed was developed by Max von Stephanitz using various traditional German herding dogs from 1899.

J. Allen Boone was an American author of several books about nonverbal communication with animals in the 1940s and 1950s. He wrote much on his friendship with Strongheart, a film star-German shepherd, who he credits with teaching him how to achieve deeper bonds through extrasensory perception, a "silent language" that can be learned.

The Littlest Hobo is a Canadian television series based upon a 1958 well-known film of the same name directed by Charles R. Rondeau. The series first aired from 1963 to 1965 in syndication, and was revived for a popular second run on CTV, spanning six seasons, from October 11, 1979, to March 7, 1985. The concept of the show was that of "an ownerless dog". 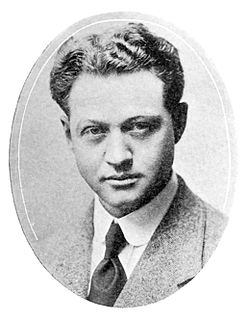 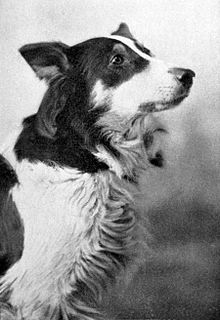 Jean, also known as the Vitagraph Dog (1902–1916), was a female collie that starred in silent films. Owned and guided by director Laurence Trimble, she was the first canine to have a leading role in motion pictures. Jean was with Vitagraph Studios from 1909, and in 1913 went with Trimble to England to work with Florence Turner in her own independent film company.

Ace the Wonder Dog was a German Shepherd Dog that acted in several films and film serials from 1938 to 1946. His first appearance was in the 1938 Lew Landers film Blind Alibi. He is considered by many critics an attempt by RKO Pictures to cash in on the success of Warner Bros.' canine sensation, Rin Tin Tin.

The Walk of Fame is a tribute to famous dogs in London, England. The initial six inductees were announced in November 2007. The honours were sponsored by The Kennel Club and television channel Sky Movies. 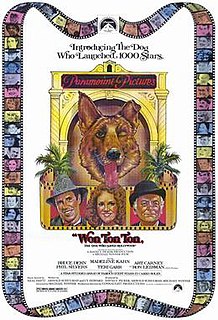 Lightning was a German shepherd from a line of canine silent film stars. A grandson of Strongheart, Lightning was billed as "The Wonder Dog" and "The Marvel Dog". He began life as a runt but grew to be larger than average for the breed, and he was very intelligent. Lightning appeared in numerous movies. 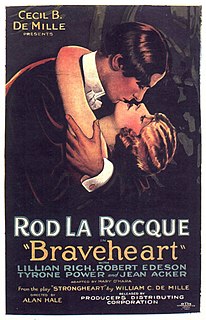 Braveheart is a 1925 American silent contemporary Western film directed by Alan Hale Sr. and starring Rod La Rocque. The story focuses on members of a tribe of Indians who are being intimidated by the owners of a canning company seeking to violate a treaty protecting the tribe's fishing grounds. Braveheart is a remake of the 1914 film Strongheart directed by James Kirkwood Sr. and produced by the American Mutoscope and Biograph Company.

Uggie was a trained Parson Russell Terrier famous for his roles in Water for Elephants and The Artist. His memoir Uggie, My Story was published in the United States, the UK, and France in October 2012.

Brawn of the North is a lost 1922 American silent Northwoods film. It was produced by Laurence Trimble and Jane Murfin with release through Associated First National Pictures. The film stars Irene Rich and a new canine find by Trimble named Strongheart. This was the second film starring the dog after his introduction in The Silent Call (1921). The film is now considered lost.

Rang-a-Tang the Wonder Dog is a fictional canine adventure hero who appeared in Blue Ribbon Comics, published from 1939 to 1942 by MLJ Comics during the Golden Age of Comic Books. The character was created by writer Norman Danberg and artist Will Harr, although another creative team, writer Joe Blair and artist Ed Smalle, produced most of his adventures. 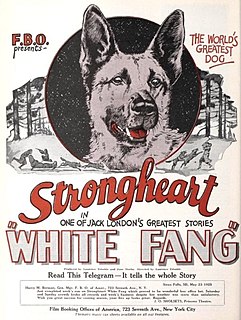 White Fang is a 1925 American silent Western film directed by Laurence Trimble and featuring Theodore von Eltz, Ruth Dwyer, and Matthew Betz. It was produced by FBO Pictures as a starring vehicle for Strongheart, an Alsatian who appeared in a number of films during the decade. It is based on the 1906 novel White Fang by Jack London.

Wikimedia Commons has media related to Strongheart .
This page is based on this Wikipedia article
Text is available under the CC BY-SA 4.0 license; additional terms may apply.
Images, videos and audio are available under their respective licenses.