Noriko Itō, better known by the stage name of Noriko Hidaka, is a Japanese actress, voice actress, singer and narrator. She played Minami Asakura in Touch, Akane Tendo in Ranma ½, Satsuki Kusakabe in My Neighbor Totoro, Near in Death Note, Yuki Tsukumo in Jujutsu Kaisen, Jean Roque Raltique in Nadia: The Secret of Blue Water and Kikyo in Inuyasha. She is also the dub actress for Jayma Mays in the American TV series Glee, as well as in The Smurfs film series.

Miki Itō is a Japanese voice actress and narrator who is affiliated with the Office Osawa agency. 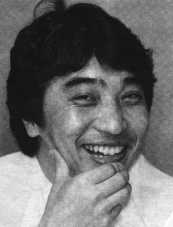 Hirotaka Suzuoki was a Japanese actor, voice actor and narrator from Nagoya, Aichi Prefecture who graduated from Tokyo Keizai University.

Sumi Shimamoto, real name Sumi Koshikawa, is a Japanese actress, voice actress and narrator of film and anime and video games. After graduating from the Toho Gakuen College of Drama and Music, she joined Gekidan Seinenza, a theatrical acting troupe. She is currently independent of any talent management company.

Gangan is a manga imprint owned by Square Enix Holdings. It originated as a manga imprint for Enix before the company re-branded as Square Enix. It publishes manga in several anthologies aimed at different reader demographic groups in the Japanese market. Its anthologies are home to some popular Square Enix manga series which were adapted into anime series, like Fullmetal Alchemist, Moribito: Guardian of the Spirit, Nabari no Ou, Inu x Boku SS, and Soul Eater. The comics are later collected in paperback volumes under brand names such as Gangan Comics, Gangan Comics Joker and Young Gangan Comics, which identify the anthology of serialisation. These paperback brand names are formed by omitting any gekkan or shōnen in the magazine name and inserting comics directly after the word gangan.

Higurashi When They Cry, known simply as When They Cry for the North American release of the anime adaptation before 2020, is a Japanese murder mystery dōjin soft visual novel series produced by 07th Expansion that comprises the first two entries of the When They Cry franchise. The series focuses on a group of young friends living in the fictional rural village of Hinamizawa and the strange events that occur there in 1983.

Michiko Yokote is a Japanese screenwriter.

Atsuko Nakajima is a Japanese animator, character designer, and illustrator. She is married to anime director and animator Tomohiro Hirata, with whom she also collaborated in the Trinity Blood anime.

Frontier Works is a Japanese company specializing in the creation and distribution of media related to anime, such as producing OVAs, radio dramas, drama CDs, anime soundtracks, or other related products. The company was established in August 1990.

Umineko When They Cry is a Japanese dōjin soft visual novel series produced by 07th Expansion. Its first episode debuted at Comiket 72 for Windows on August 17, 2007. The story focuses on a group of eighteen people on a secluded island for a period of two days, and the mysterious murders that befall them. Readers are challenged to discern whether the murders were committed by a human or of some other supernatural source, as well as the method and motive behind them. The eight main Umineko games are split into two sets of four, which are considered the third and fourth titles in the When They Cry series, preceded by the two sets of Higurashi When They Cry games and followed by Ciconia When They Cry.

Ayane is a female Japanese singer from Saitama Prefecture who has performed theme songs for games and anime. She made her major singing debut in 2004 with the single KIZUNA～絆. Her first album ARCHIVE LOVERS was released in 2007. She is attached to 5pb. Ayane, previously known by her real name as Junko Hirata, was a member of the band platoniX with Tatsuya "Tatsh" Shimizu.

Junji Nishimura is a Japanese anime director and producer currently residing in Karatsu, Saga. After graduating from Meiji Gakuin University in 1980, Nishimura entered into the anime studio Nishiko Production. Nishimura had his first job as a producer for Baldios in 1980, and went on to be in charge of production in other series such as Six God Combination Godmars, and Magical Princess Minky Momo in 1982. An episode of Urusei Yatsura he directed in 1982, "After You've Gone", was voted the favorite episode of the TV series by Japanese fans. In 1984, Nishimura resigned from Nishiko and in 1985 had his director debut with Pro Golfer Saru. Since then, he has worked as the director on many anime produced by Studio Deen, notably Ranma ½ and Kyo Kara Maoh!. In 2019, he was named as director of a new anime series, Vladlove, about a girl vampire that was written by Mamoru Oshii and financed by Ichigo Inc..

Takeshi Mori is a Japanese anime director, storyboard artist, and scriptwriter. After graduating from Waseda University, Mori began working in the anime industry. 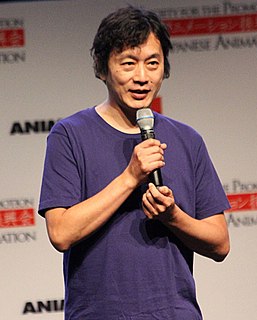 Kazuhiro Furuhashi is a Japanese anime director and supervisor, born in Hamamatsu, Shizuoka Prefecture. He is amongst anime's most foremost directors, having directed and helmed the Rurouni Kenshin series, Zipang, the You're Under Arrest series, GetBackers, Hunter × Hunter, Le Chevalier D'Eon, Real Drive and most recently, Mobile Suit Gundam Unicorn. 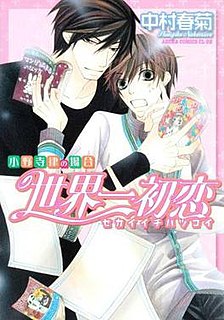 The World's Greatest First Love: The Case of Ritsu Onodera is a Japanese BL manga series written and illustrated by Shungiku Nakamura. In 2011, the manga was adapted into an anime television series. Produced by Studio Deen under the direction of Chiaki Kon, the anime series began its broadcast run on April 9, 2011. An original animation DVD was bundled with the fifth and sixth volumes of the manga series, released in March and September 2011. A film adaptation was released on March 15, 2014.

Shungiku Nakamura is a Japanese manga artist. She is most famous for creating Junjo Romantica: Pure Romance. Shungiku Nakamura's distinct style of manga has been identified largely throughout Japanese and English yaoi fanbases. Her works usually include large age gaps between the seme and uke and characters with careers in the publishing industry. She often cowrites with Fujisaki Miyako, who authored the novels of Yoshino Chiaki no baai in Sekai-ichi Hatsukoi.

Munetaka Aoki is a Japanese actor. He played Sanosuke Sagara in the live action adaptation of the manga and anime series Rurouni Kenshin. He is married to Japanese actress and model Yūka.