Stunting is a type of publicity stunt in radio broadcasting, where a station—abruptly and often without advance announcement—begins to air content that is seemingly uncharacteristic compared to what is normally played.

Stunting is typically used to generate publicity and audience attention for upcoming changes to a station's programming, such as new branding, format, or as a soft launch for a newly-established station. Occasionally, a stunt may be purely intended as publicity or a protest, and not actually result in a major programming change. Stunts often involve a loop of a single song, or an interim format (such as the discography of a specific artist, Christmas music, a specific theme, or novelty songs), which may sometimes include hints towards the station's new format or branding.

To a lesser extent, stunting has also been seen on television, most commonly in conjunction with April Fool's Day, or to emphasize a major programming event being held by a channel.

A station may stunt by repeating the same song, playlist, or other content on a continuous loop: [1]

Occasionally a station dropping an old format will stunt with a transitional format, either containing clues and previews relating to the new format (such as songs referencing its new branding, and artists who may be included in the eventual format), or having little to do with it. This can include songs based on specific themes (such as a single musician), or novelties that would not be viable as a permanent format. In some cases (sometimes referred to as a "wheel of formats"), a station may cycle between multiple formats during the stunt until the new, permanent format launches. [20] [21]

Christmas music and other holiday formats

Cartoon Network has broadcast its share of stunts over the years, many on April Fools' Day. On April 1, 1997, the network aired a stunt where it had purportedly been taken over by Screwy Squirrel, and subsequently broadcast the Screwy Squirrel cartoon "Happy-Go-Nutty" for 12 hours straight. [64] Numerous complaints were received about this particular event, generally fielded by Cartoon Network's cable providers, who had been left in the dark about the stunt. [64] Later April Fools' Day stunts on Cartoon Network have included an 11 hour Cow and Chicken marathon in place of a scheduled Chowder marathon on April 1, 2009, and 14 hours of programming edited to have googly eyes on April 1, 2017. [65]

Cartoon Network's late-night block Adult Swim has held a number of their own April Fools' programming stunts, such as promoting a television premiere of Aqua Teen Hunger Force Colon Movie Film for Theaters before its theatrical release (but displaying it in a comically-small window over regularly-scheduled programming), airings of the Tommy Wiseau film The Room , episodes of Aqua Teen Hunger Force and Rick and Morty redubbed by children ("Adult Swim Junior"), [66] [67] and an airing of its anime block Toonami with programs in their original Japanese audio with subtitles (including an airing of Masaaki Yuasa's 2004 experimental film Mind Game ). [68] The stunts have sometimes included unannounced previews and premieres of new and existing series, such as additional episodes of Perfect Hair Forever after its supposed series finale, the third season premiere of Rick and Morty, and an unannounced world premiere of the first episode of FLCL 's third season before its second season had even premiered in the U.S. yet. [69] [66] [70] [71]

For 35 days in early-1998, Birmingham, Alabama's CBS affiliate WBMG—which had recently been acquired by Media General—stunted during the usual timeslots of its local newscasts with a clock counting down to a major relaunch of the station (and its fledgling news department) on February 5. [72] [73]

Nick Jr. Too, a sister to the British Nick Jr. channel, has occasionally aired long-term marathons of Peppa Pig , during which it has branded as "Nick Jr. Peppa". [74] In a similar manner, Sky Sports has also temporarily rebranded some of its channels to devote them specifically to certain major events, such as The Ashes series in cricket (Sky Sports Ashes), [75] the PDC World Darts Championship (Sky Sports Darts; in 2015, this used the Sky Sports F1 channel, since Formula One was in its off-season), [76] [77] and golf's Open Championship (Sky Sports The Open). [78] In January 2019, Sky Sports Action was temporarily renamed "Sky Sports USA", with programming focusing on the National Basketball Association (coinciding with the playing of the NBA Global Games series in London), and the National Football League playoffs and Super Bowl LIII. [79] [80]

At least three networks have used stunting-type events prior to their formal launches: G4, for example, aired a 7 day long game of Pong before its formal debut on April 24, 2002. [81] This stunt would later be referenced by the network in its final minute on air on December 31, 2014, as well as in the video announcing its 2021 return. [82] [83] MLB Network aired a continuous loop of baseball highlights and promos as a "soft launch" in the weeks before its formal debut on January 1, 2009. Canada's Sun News Network employed an on-screen countdown clock graphic in the hours before its April 18, 2011, launch. [84]

Since 2017, one of ESPN's networks has stunted as "ESPN8" on or near August 8 (8/8), carrying a marathon of programming featuring obscure and unconventional sporting events and competitions, such as chess boxing, disc golf, dodgeball, esports, Highland games, kabaddi, lawn mower racing, mini-golf, and roller derby. The stunt pays tribute to a fictitious eighth ESPN network of the same name portrayed in the 2004 sports comedy film DodgeBall: A True Underdog Story (nicknamed "The Ocho", in reference to ESPN2 being nicknamed "The Deuce" on launch), which carries coverage of competitions that are "almost a sport". The stunt was originally held on ESPNU—a channel that normally carries college sports events during the academic year, but moved to ESPN2 beginning in 2018. DodgeBall has also been screened as part of this lineup since 2018. [85] [86] [87] [88] [89]

KSLZ is a Top 40 (CHR) radio station in St. Louis, Missouri, United States. The iHeartMedia outlet broadcasts at 107.7 MHz with an ERP of 100 kW. Its transmitter is located in Shrewsbury, a suburb of St. Louis, and operates from studios in St. Louis south of Forest Park.

KJR-FM is a commercial radio station licensed to Seattle, Washington. The station is owned and operated by iHeartMedia. The studios and offices are on Elliott Avenue West in Seattle's Belltown neighborhood northwest of downtown. The transmitter is located on Cougar Mountain.

KVGS - branded as 102.7 VGS - is a commercial radio station licensed to Boulder City, Nevada, serving the Las Vegas Valley region. KVGS broadcasts a hot adult contemporary format. The station's studios are located in Spring Valley in unincorporated Clark County, while its transmitter is on Black Mountain in Henderson.

WPYO, is a radio station licensed to Maitland, Florida. The station airs a Spanish contemporary hits format, and is branded as "El Zol 95.3.” Owned by Spanish Broadcasting System, it serves the Greater Orlando area. The station's transmitter is located in Pine Hills. 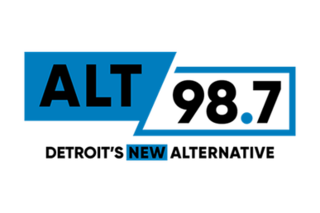 WDZH is a commercial radio station licensed to Detroit, Michigan and serving the Metropolitan Detroit radio market in Southeastern Michigan. It is owned by Audacy, Inc. and airs an alternative rock radio format.

KLIF-FM is a commercial radio station licensed to Haltom City, Texas, and serving the Dallas-Fort Worth Metroplex. The station is owned by Cumulus Media, and the broadcast license is held by Radio License Holding SRC LLC. It broadcasts a hot adult contemporary radio format, mainly focusing on hits from the 1990s and 2000s while also playing some songs from the 1980s, 2010s and today. The studios and offices are in the Victory Park district in Dallas just north of downtown.

KBKS-FM – branded as Hits 106-1 – is a commercial radio station licensed to Tacoma, Washington, and serving the Seattle metropolitan area. Owned by iHeartMedia, it broadcasts a Top 40/CHR format. The studios and offices are located on Elliot Avenue West in the Belltown neighborhood of Seattle. The transmitter is on Tiger Mountain, in Issaquah. 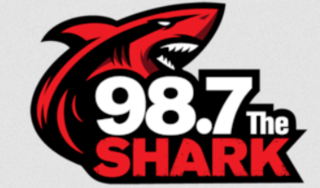 WPBB is a commercial FM radio station licensed to Holmes Beach, Florida and serving the Tampa Bay media market. It is owned by the Beasley Broadcast Group, and airs a classic rock radio format, branded as "98.7 The Shark." 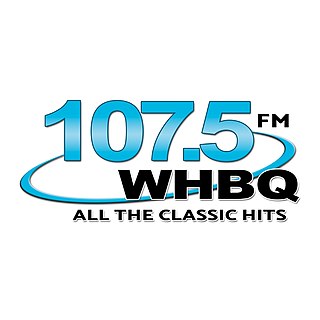 WHBQ-FM is a Germantown, Tennessee, United States-based radio station broadcasting a classic hits format. It serves Memphis along with its northern and eastern suburbs from an antenna located in Cordova, Tennessee. It is commonly referred to as the "Q", and first hit airwaves on March 23, 2004. It is owned by the Flinn Broadcasting Corporation. Despite sharing call letters, WHBQ-FM is not co-owned with WHBQ-TV. It operates from its studios in Southeast Memphis.

KDHT is a commercial FM radio station in Denver, Colorado. KDHT broadcasts a top 40 format branded as "Hits 95.7", and is owned by iHeartMedia. The station has studios and offices on South Monaco Street in the Denver Tech Center, while the transmitter site is atop Lookout Mountain in Golden.

WHHH is a radio station licensed to Speedway, Indiana. Owned by Urban One, it broadcasts an urban contemporary format serving the Indianapolis metropolitan area. Its studios are co-located with its sister stations at Meridian Street in downtown Indianapolis, with its transmitter located on the city's east side.

WUMR is a commercial Spanish CHR FM radio station licensed to serve Philadelphia, Pennsylvania, and owned by iHeartMedia, Inc. The WUMR studios are located in the neighboring community of Bala Cynwyd, while the station transmitter resides in nearby Wyndmoor. Besides a standard analog transmission, WUMR broadcasts using two HD Radio channels, and is available online via iHeartRadio.

WNOH is a commercial FM radio station licensed to Windsor, Virginia, serving the Hampton Roads radio market in Virginia and Northeastern North Carolina. WNOH is owned and operated by iHeartMedia. The station airs an African American-oriented all-news radio format, as an affiliate of the Black Information Network.

CFCA-FM is a Canadian radio station broadcasting at 105.3 FM in Kitchener, Ontario. The station currently plays a Top 40/CHR format branded as 105.3 Virgin Radio and is owned by Bell Media. 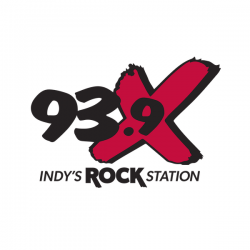 WNDX is a commercial FM radio station, licensed to Lawrence, Indiana, and serving the Indianapolis metropolitan area. It is owned by Cumulus Media and airs a mainstream rock radio format, using the moniker 93-9X. The studios and offices are located on North Shadeland Avenue on the east side of Indianapolis.

KFCO is a commercial FM radio station broadcasting a Classic Hip Hop format licensed to Bennett, Colorado, and serving the Denver metropolitan area. It is owned by Max Media with its radio studios and offices on Parker Road in Aurora.

KTFM is a radio station serving the San Antonio area. The Alpha Media outlet operates with an effective radiated power of 10.5 kw and its city of license is Floresville, Texas. Its studios are located in Northeast San Antonio, and the transmitter site is in southeast Bexar County.