The Styria Football Association (German : Steirischer Fußball-Verband, StFV) is the umbrella organization of the football clubs of the Austrian state Styria. The StFV was founded in 1911 and has its headquarters in Graz.

The StFV is one of 8 regional organizations of the Austrian Football Association (German : Österreichischer Fußball-Bund, ÖFB).

The time before the establishment of the Styria Football Association

1893 Georg-August Wagner of Graz, brought the sport of football from Prague to Graz. He was able to quickly inspire students about this new sport. Just one year later, the first football division of the ATRV Graz was founded in Styria. The first football league game between two teams of the ATRV was played on March 18, 1894 in Graz. On October 31, 1895, a game between 1894 founded First Vienna FC and a team of Graz ATRV took place, in which Vienna took the win 5-0. [2]

In 1900, the Graz SV was founded and in 1902 the Grazer AK (GAK). The later important Grazer Sportklub "Sturm" (Storm) – which is better known today as the SK Sturm Graz – was founded in 1909. The first significant competition in Styria, in 1907, was won by Wiener Sport-Club by a Final victory in the "Herbstmesse-Pokal" (Autumn Fair Cup) over the GAK. The Deutsch-Alpenländische Fußball-Verband (German-Alpine Football Association) was founded as one of the five sub-organizations of the Austrian Football Association. However, it was the only association that could not organize a championship for the teams of Upper Austria, Salzburg, Tyrol, Vorarlberg, the littoral, Carinthia and Styria.

In May 1921 the Deutsch-Alpenländische Fußball-Verband broke up. [2] After the Carinthian clubs left, only the Styrian teams remained and the Styrian Football Association was founded. The first records of the Styrian Championships, which were recorded as of 1921, was the Amateur Championship of Austria through the GAK in 1929,1932 and 1933. In 1934, the SK Sturm Graz won. 1937 the professional team Chelsea F.C. from London took the win over the selected Styrian Football Association team with a score of 4-2.

1947 was the first decision to make a total Austrian Cup competition, then in 1949 the Austrian Football Bundesliga were established with an A and B league. This first championship was won by FK Austria Wien. The first Styrian participants, the SK Sturm Graz, placed 10th.

Success of the Styrian Clubs in Professional Football

In 1955 the Steiermark attained a one time record: Playing in the A League was the SK Sturm Graz, the Grazer AK, the Kapfenberger SV and ESV Austria Graz four Styrian teams. In 1959 the B League was disbanded and replaced by the Regionalliga Mitte. In 1962 the GAK managed as the first Austrian club outside Vienna to participate in the European Cup.

In 1974, the new Zehnerliga (ten-League) was introduced (as a 1st Division) and the professional 2. Division. The Donawitzer SV Alpine and GAK went to the 2nd Division and only the SK Sturm Graz remained in the 1st Division. In 1973 the relegation of SK Sturm Graz was only prevented by a special decision of the Association. In 1981 the GAK won their first major title, the ÖFB Cup. In 1998 the SK Sturm Graz became the first Styrian football club to receive the title of Austrian Football Champion, in 1999 they defended their title successfully. 2004 the GAK became the second Styrian club to win the Austrian Football Championship. In 2011, once again the Austrian Championship was awarded to a Styrian team, the SK Sturm Graz.

Grazer AK, founded 18 August 1902 as Grazer Athletiksport Klub, is an Austrian sports club, from the city of Graz in the federal state of Styria (Steiermark). The football section used to be one of the most popular Austrian clubs, mostly successful in the decade 1995–2005. The other sections are basketball, diving and tennis, which however all act as separate legal entities. The "GAK" football section was folded during the 2012–13 Regionalliga Mitte Season in Autumn 2012. It has since been revived and returned to Austrian Second League in 2019.

Sportklub Sturm Graz is an Austrian association football club, based in Graz, Styria, playing in the Austrian Football Bundesliga. The club was founded in 1909. Its colours are black and white.

DSV Leoben is an Austrian association football club based in Leoben. It was founded in 1928. They play at the Donawitz Stadium. 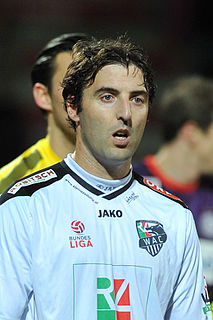 Joachim Standfest is an Austrian football coach and a former player who played as a midfielder / defender. He is the manager of Amstetten.

Markus Hiden is an Austrian retired professional footballer and manager. 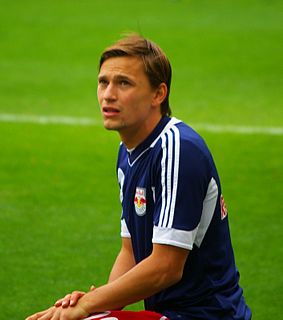 Stefanie Enzinger is an Austrian footballer who plays as a forward for St. Pölten in the ÖFB-Frauenliga.

Sportklub Sturm Graz is an Austrian women's football club based in Graz, Styria. The club was founded in 1909 however the women's section has been in existence since 2011. Sturm Graz play in the ÖFB-Frauenliga, the top flight of domestic women's football in Austria and are regular competitors in the UEFA Women's Champions League. The team's colours are black and white.

The 2020–21 Austrian Cup was the 90th edition of the national cup in Austrian football. The champions of the cup earn a place in the 2021–22 Europa League group stage.