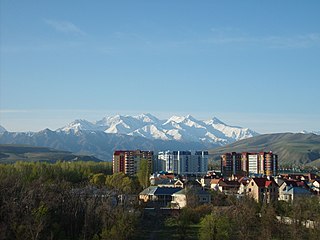 Bishkek, formerly Pishpek and Frunze, is the capital and largest city of Kyrgyzstan. Bishkek is also the administrative centre of the Chuy Region. The province surrounds the city, although the city itself is not part of the province, but rather a province-level unit of Kyrgyzstan. It is also near the Kazakhstan-Kyrgyzstan border. 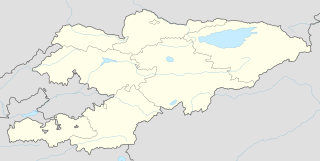 Kyrgyzstan is a landlocked nation in Central Asia, west of the People's Republic of China. Less than a seventh the size of Mongolia, at 199,951 square kilometers, Kyrgyzstan is one of the smaller Central Asian states. The national territory extends about 900 km (560 mi) from east to west and 410 km (250 mi) from north to south. 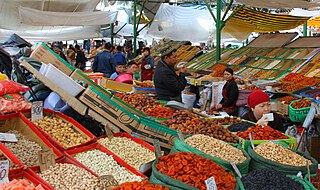 Telecommunications in Kyrgyzstan include fixed and mobile telephones and the Internet.

Kyrgyzstan, officially the Kyrgyz Republic, also known as Kirghizia, is a landlocked country in Central Asia. It is bordered by Kazakhstan, Uzbekistan, Tajikistan and China. Its capital and largest city is Bishkek. 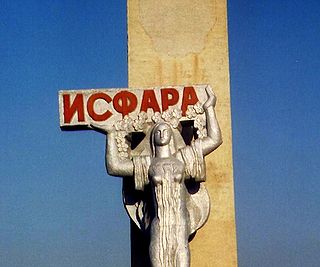 Isfara is a city in Sughd Region in northern Tajikistan, situated on the border with Kyrgyzstan. The city was the seat of the former Isfara District.

.kg is the Internet country code top-level domain (ccTLD) for Kyrgyzstan. Although registrations are normally at the second level, there are some specialized third-level registrations such as those under gov.kg and mil.kg.

Kyrgyz Premier League is the top division of professional football in Kyrgyzstan. It was created in 1992 after the Breakup of the Soviet Union. The league is composed of eight teams. The most successful team is Dordoi Bishkek who have won the league nine times.

The regions of Kyrgyzstan are divided into districts (raions), administered by government-appointed officials. Rural communities consisting of up to twenty small settlements have their own elected mayors and councils. The raions are listed below, by region:

Vorukh is a jamoat in northern Tajikistan. It is an exclave surrounded by Kyrgyzstan that forms part of the city of Isfara in Sughd Region. As of 2015, the jamoat had a total population of 30,506.

Statistics of Kyrgyzstan League for the 2005 season.

Kyrgyzstan–Pakistan relations are the relations between Kyrgyzstan and Pakistan. Relations between the two countries were established on 20 December 1991 shortly after Kyrgyzstan became independent from the Soviet Union. Diplomatic relations were formally established on 10 May 1992.in 1991 both countries signed an agreement for the promotion and expansion of economic and cultural ties. Relations have since strengthened. According to The News (Pakistan), Kyrgyzstan Ambassador to Pakistan Erik Beishembiev said that their relations are greatly valued. They share cultural ties with the Mughal Empire, which's founder Babur was born in current-day territory of Kyrgyzstan. According to The News (Pakistan) the Ambassador said “Today our countries enjoy excellent political relations and regularly exchange visits on the highest and high levels."

India–Kyrgyzstan relations is the relation between India and Kyrgyzstan.

The Kyrgyzstan League Second Level is the second highest division of Kyrgyzstan football, below the Kyrgyz Premier League.

Kyrgyzstan is ranked as the 135th least corrupt country in the 2017 Corruption Perceptions Index, and despite having a strong legal framework, there still exists a huge gulf in implementation of the law. Kyrgyzstan’s rampant corruption which penetrates all levels of society, including the presidency, eventually caused the Tulip Revolution in 2005, overthrowing Askar Akayev, and the 2010 Kyrgyzstani revolution, ousting Kurmanbek Bakiyev from office.

Kyrgyzstan–Turkey relations are the foreign relations between Kyrgyzstan and Turkey.