The scale and subdominant triad in C major (top) and C minor (bottom).

In music, the subdominant is the fourth tonal degree (

These chords may also appear as seventh chords: in major, as IVM7, or in minor as iv7 or sometimes IV7: [6]

As with other chords which often precede the dominant, subdominant chords typically have predominant function. In Riemannian theory, it is considered to balance the dominant around the tonic (being as far below the tonic as the dominant is above).

In music, the mediant is the third scale degree of a diatonic scale, being the note halfway between the tonic and the dominant. In the movable do solfège system, the mediant note is sung as mi. While the fifth scale degree is almost always a perfect fifth, the mediant can be a major or minor third.

In music theory, the term scale degree refers to the position of a particular note on a scale relative to the tonic, the first and main note of the scale from which each octave is assumed to begin. Degrees are useful for indicating the size of intervals and chords and whether they are major or minor. 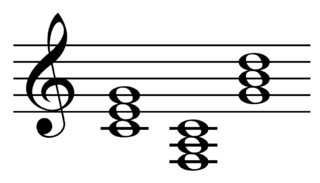