The administrative posts (former subdistricts) of East Timor are subdivided into 442 sucos ("villages") and 2,336 aldeias ("communities"). [1] 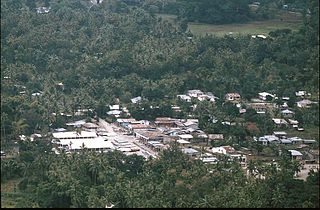 Same is a city in the Same Subdistrict in the interior of East Timor, 81 kilometres (50 mi) south of Dili, the national capital. Same has a population of 7,413 and is the capital of Manufahi District, which was known as Same District in Portuguese Timor.

The Bunak people are an ethnic group that live in the mountainous region of central Timor, split between the political boundary between West Timor, Indonesia, particularly in Lamaknen District and East Timor. Their language is one of the few on Timor which is not an Austronesian language, but rather a Papuan language, belonging to the Trans–New Guinea linguistic family. They are surrounded by groups which speak Malayo-Polynesian languages, like the Atoni and the Tetum.

The Kemak people are an ethnic group numbering 80,000 in north-central Timor island. They primarily live in the district of Bobonaro, East Timor, while the rest live in the East Nusa Tenggara province of Indonesia.

East Timor or Timor-Leste, officially the Democratic Republic of Timor-Leste, is an island country in Southeast Asia and Oceania It comprises the eastern half of the island of Timor, the nearby islands of Atauro and Jaco, and Oecusse, an exclave on the northwestern side of the island surrounded by Indonesian West Timor. Australia is the country's southern neighbour, separated by the Timor Sea. The country's size is about 15,007 km2.

Babulo(Babolu) is a settlement in East Timor and a Suco in the Uato-Lari Administrative Post. The Suco is one of the ethnic centers of the Naueti, and is also inhabited by the Makasae, an ethnic minority in the region. The different groups and clans are tightly connected through an ancient social structure which still has a big impact on their society today.