The Sudanese Professionals' Association (SPA; Arabic : تجمع المهنيين السودانيين‎) is an umbrella association of 17 different Sudanese trade unions. The organisation started forming in October 2012, [1] though was not officially registered due to government crackdowns on trade unions, and was created more formally in October 2016 by an alliance between unions of doctors, journalists and lawyers. [1] In December 2018, the group called for the introduction of a minimum wage and participated in protests in Atbara against the rising cost of living. The SPA came to take an increasingly prominent role in the 2018–2019 Sudanese protests against the government of Omar al-Bashir during 2019. [2]

In 2012, a university lecturers' union in Sudan, in which Mohamed Yousif Ahmed al-Mustafa was active, judged that it was not strong enough to be effective. The lecturers' union joined with a doctors' union and a committee of teachers. In 2014, the groups had chosen the name Sudanese Professionals Association and started planning campaigns for a living wage and improved working conditions. [2] In October 2016, a formal alliance between the Central Committee of Sudanese Doctors, the Sudanese Journalists Network, and the Democratic Lawyers Association was created on the basis of a written charter. [1]

Following the 3 June 2019 Khartoum massacre, the SPA called for "complete civil disobedience and open political strike" on the grounds that the Transitional Military Council (TMC) was responsible for two days of mass murder, pillage, rape and violent repression of workers' strikes. The SPA described the TMC members as "deep to their knees in the blood of the innocent in Darfur, Nuba Mountains and Blue Nile, in addition to Khartoum and other cities and towns." [3] The SPA called for the Sudanese to follow the method of nonviolent resistance "in all [their] direct actions, towards change". [3]

In August 2019, the SPA announced that it would not take part in the cabinet of the transitional government but would instead participate in the Legislative Council in order to oversee the transition to democracy. [4] [5]

SPA member Mohammed Hassan Osman al-Ta'ishi (or Mohamed El Taayshi) became one of the eleven members of the Sovereignty Council, the collective head of state of Sudan for a planned 39-month transitional period, on 20 August 2019. [6] [7] [8]

The Cabinet of Sudan usually refers to the chief executive body of the Republic of the Sudan. The Cabinet was dissolved following the 11 April 2019 Sudanese coup d'état. Chapter 5 of the August 2019 Draft Constitutional Declaration defines the procedures which led to the nomination of Abdalla Hamdok as Prime Minister, and up to 20 Ministers in the Cabinet, during late August 2019, for the 39-month democratic transition. The Sudanese Women's Union protested against this. Under Article 19 of the Draft Constitutional Declaration, the ministers of the Transitional Cabinet are ineligible to run in the election scheduled to follow the transition period. 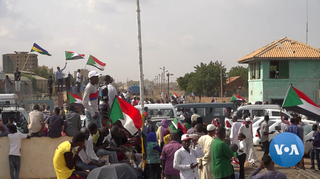 The Sudanese Revolution was a major shift of political power in Sudan that started with street protests throughout Sudan on 19 December 2018 and continued with sustained civil disobedience for about eight months, during which the 2019 Sudanese coup d'état deposed President Omar al-Bashir on 11 April after thirty years in power, 3 June Khartoum massacre took place under the leadership of the Transitional Military Council (TMC) that replaced al-Bashir, and in July and August 2019 the TMC and the Forces of Freedom and Change alliance (FFC) signed a Political Agreement and a Draft Constitutional Declaration legally defining a planned 39-month phase of transitional state institutions and procedures to return Sudan to a civilian democracy. 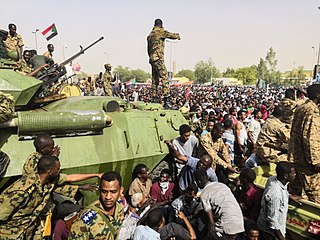 The 2019 Sudanese coup d'état took place on the late afternoon of 11 April 2019, when Sudanese President Omar al-Bashir was overthrown by the Sudanese army after popular protests demanded his departure. At that time the army, led by Ahmed Awad Ibn Auf, toppled the government and National Legislature and declared a state of emergency in the country for a period of 3 months, followed by a transitional period of two years before an agreement was reached later.

The Transitional Military Council (TMC) was the military junta governing Sudan that was established on 11 April 2019, after the 2019 Sudanese coup d'état that took place during the Sudanese Revolution, and was formally headed by Abdel Fattah al-Burhan, Inspector of the Armed Forces, after Ahmed Awad Ibn Auf resigned as leader one day following the coup. 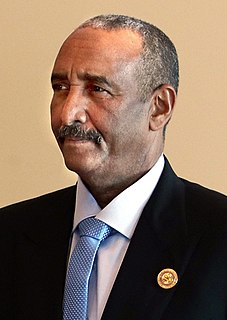 General Abdel Fattah Abdelrahman al-Burhan is a Sudanese politician and Sudanese Army general who is the de facto head of state of Sudan as the Commander-In-Chief of the Sudanese Armed Forces after leading a coup d'état in October 2021 that deposed Prime Minister Abdalla Hamdok.

General Mohamed Hamdan Dagalo, generally referred to as Hemetti, Hemedti, Hemeti or Hemitte, from the Rizeigat tribe in Darfur, who was the Deputy Chairman of the Transitional Military Council (TMC) following the 2019 Sudanese coup d'état. On 21 August 2019, the TMC transferred power to the civilian–military Sovereignty Council, of which Hemetti is a member. Under Article 19 of the August 2019 Draft Constitutional Declaration, Hemetti and the other Sovereignty Council members are ineligible to run in the 2022 Sudanese general election.

The Khartoum massacre occurred on 3 June 2019, when the armed forces of the Sudanese Transitional Military Council, headed by the Rapid Support Forces (RSF), the immediate successor organisation to the Janjaweed militia, used heavy gunfire and teargas to disperse a sit-in by protestors in Khartoum, killing more than 100 people, with difficulties in estimating the actual numbers. At least forty of the bodies had been thrown in the River Nile. Hundreds of unarmed civilians were injured, hundreds of unarmed citizens were arrested, many families were terrorised in their home estates across Sudan, and the RSF raped more than 70 women and men. The Internet was almost completely blocked in Sudan in the days following the massacre, making it difficult to estimate the number of victims.

The 2019–2024 Sudanese transition to democracy is an ongoing democratic transition in Sudan that began in July 2019. 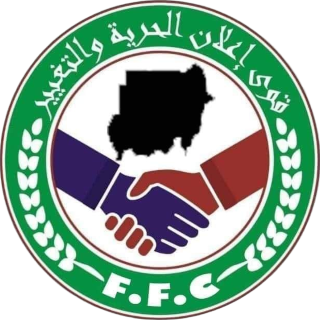 The Forces of Freedom and Change is a wide political coalition of civilian and rebel coalitions of Sudanese groups, including the Sudanese Professionals Association, No to Oppression against Women Initiative, MANSAM, the Sudan Revolutionary Front, the National Consensus Forces, Sudan Call, the Unionist Association, and the Sudanese resistance committees, created in January 2019 during the 2018–19 Sudanese protests. The FFC drafted a "Declaration of Freedom and Change" and "Freedom and Change Charter" which called for president Omar al-Bashir to be removed from power, which occurred after several more months of protest in the April 2019 Sudanese coup d'état. The FFC continued coordinating protest actions, and in July 2019, negotiated a power-sharing plan with the Transitional Military Council (TMC) for a transition to return to democracy. The agreement was signed on 17 July 2019.

The Darfur Bar Association is a Sudanese lawyers' organisation created in 1995. In 2020, the group received the Democracy Award for supporting marginalized people in advocating for their rights and providing legal assistance to vulnerable activists before and during protests in Sudan.

Abdalla Hamdok is a Sudanese public administrator who serves as the 15th Prime Minister of Sudan. Prior to his appointment, Hamdok served in numerous national and international administrative positions. From November 2011 to October 2018, he was Deputy Executive Secretary of the United Nations Economic Commission for Africa (UNECA). UNECA staff described Hamdok as "[a] diplomat, a humble man and a brilliant and disciplined mind". In August 2019, Hamdok was suggested as a likely candidate for Prime Minister of Sudan for the 2019 Sudanese transition to democracy.

The eleven-member Sovereignty Council of Sudan was the collective head of state of Sudan from 20 August 2019, when it was created by the August 2019 Draft Constitutional Declaration, until 25 October 2021, when it was dissolved following the October 2021 Sudanese coup d'état. The Council was to have been the head of state for a 39-month transitional period, scheduled to end in November 2022.

Nemat Abdullah Mohamed Khair is a Sudanese judge of the Sudanese Supreme Court who became Chief Justice of Sudan on 10 October 2019. As such, under Article 29.(3) of the August 2019 Draft Constitutional Declaration, she is also the president of the Supreme Court of Sudan and is "responsible for administering the judicial authority before the Supreme Judicial Council." Khair is the first woman Chief Justice of Sudan.

The Khartoum massacre investigation is an official investigation of the 3 June 2019 Khartoum massacre and other human rights violations of the Sudanese Revolution, mandated under Article 7.(16) of the Sudanese August 2019 Draft Constitutional Declaration, to cover "violations committed on 3 June 2019, and events and incidents where violations of the rights and dignity of civilian and military citizens were committed." The men-only investigation committee of the massacre, rapes and other human rights violations is headed by human rights lawyer Nabil Adib. The No to Oppression against Women Initiative protested against the men-only composition of the commission. 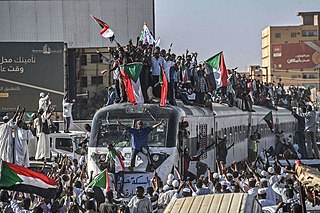 The 2019–2021 Sudanese protests consist of street protests in Sudan starting from mid-September 2019 during the 2019 Sudanese transition to democracy, on issues that included the nomination of a new Chief Justice of Sudan and Attorney-General, killings of civilians by the Rapid Support Forces (RSF), the toxic effects of cyanide and mercury from gold mining in Northern state and South Kordofan, protests against a state governor in el-Gadarif and against show trials of Sudanese Professionals Association (SPA) coordinators, and for officials of the previous government to be dismissed in Red Sea, White Nile, and South Darfur. These protests followed the sustained street protests and civil disobedience of the Sudanese Revolution and the early September 2019 transfer of executive power to the Sovereignty Council of Sudan, civilian prime minister Abdalla Hamdok and his cabinet of ministers. Hamdok described the 39-month transitional period as being defined by the aims of the revolution.

The Sudanese National Human Rights Commission has been headed by Hurriya Ismail, appointed by former president Omar al-Bashir, since March 2018 or earlier and continued under her leadership during the 2019 Sudanese transition to democracy.