Suffolk County is located in the Commonwealth of Massachusetts, in the United States. As of the 2020 census, the population was 797,936, [1] making it the fourth-most populous county in Massachusetts. [2] The county comprises the cities of Boston, Chelsea, Revere, and Winthrop. [3] The traditional county seat is Boston, the state capital and the largest city in Massachusetts. [4] The county government was abolished in 1999, and so Suffolk County today functions only as an administrative subdivision of state government and a set of communities grouped together for some statistical purposes. Suffolk County is located at the core of the Boston-Cambridge-Newton, MA-NH Metropolitan Statistical Area as well as the greater Boston-Worcester-Providence, MA-RI-NH-CT Combined Statistical Area.

The county was created by the Massachusetts General Court on May 10, 1643, when it was ordered "that the whole plantation within this jurisdiction be divided into four shires". Suffolk initially contained Boston, Roxbury, Dorchester, Dedham, Braintree, Weymouth, and Hingham. [5] The county was named after Suffolk, England, which means "southern folk." [6]

In 1731, the extreme western portions of Suffolk County, which included Mendon and Uxbridge, were split off to become part of Worcester County. In 1793, most of the original Suffolk County (including Milton) except for Boston, Chelsea, Hingham, and Hull (which remained in Suffolk) split off and became Norfolk County. Hingham and Hull would leave Suffolk County and join Plymouth County in 1803. [7] Revere was set off from Chelsea and incorporated in 1846 and Winthrop was set off from Revere and incorporated in 1852. In the late 19th century and early 20th century, Boston annexed several adjacent cities and towns including Hyde Park, Roxbury, West Roxbury, and Dorchester from Norfolk County and Charlestown and Brighton from Middlesex County, resulting in an enlargement of Suffolk County.

Like an increasing number of Massachusetts counties, Suffolk County exists today only as a historical geographic region, and has no county government. [8] All former county functions were assumed by state agencies in 1999. The sheriff, district attorney, and some other regional officials with specific duties are still elected locally to perform duties within the county region, but there is no county council, executives or commissioners. Prior to the abolition of county government, the authority of the Suffolk County Commission had for many years been exercised by the Boston City Council, even though three communities in the county are not part of the city. However, communities are now granted the right to form their own regional compacts for sharing services. [9]

Politically speaking, Suffolk County supports the Democratic Party overwhelmingly. No Republican presidential candidate has won there since Calvin Coolidge in 1924. In 2012 Barack Obama received 77.4% of the vote, compared to 20.8% for former governor of Massachusetts Mitt Romney. In the 2014 gubernatorial election, Martha Coakley carried the county by a 32.4% margin, while losing the election statewide by 48.4 to 46.5%. In 2020, Joe Biden won the county by the largest margin of any presidential candidate since Lyndon B. Johnson in 1964, and was the first candidate since then to win more than 80% of the vote in the county.

The Suffolk County Sheriff's Department's primary responsibility is oversight of the Nashua Street Jail and the South Bay House of Correction. These were built in the 1990s to replace the historic Charles Street Jail and Deer Island Prison, respectively. The Suffolk County Sheriff's Department was among those named in a 2020 WBUR report about the neglect of inmates with medical conditions in Massachusetts prisons leading to their deaths. [12]

Several notable figures in Massachusetts history were once the sheriff of Suffolk County: [13]

Suffolk County has no land border with Plymouth County to its southeast, but the two counties share a water boundary in the middle of Massachusetts Bay.

According to the 2012-2016 American Community Survey 5-Year Estimates, the largest ancestry groups in Suffolk County, Massachusetts are: [25] [26]

Tertiary institutions in the county include:

Public library systems in the county include: 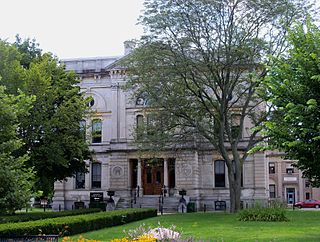 Berkshire County is a county on the western edge of the U.S. state of Massachusetts. As of the 2020 census, the population was 129,026. Its largest city and traditional county seat is Pittsfield. The county was founded in 1761. The Berkshire Hills are centered on Berkshire County. Residents are known as Berkshirites. It exists today only as a historical geographic region, and has no county government, with the exception of the retirement board for former county workers, and certain offices such as the sheriff and registry of deeds. 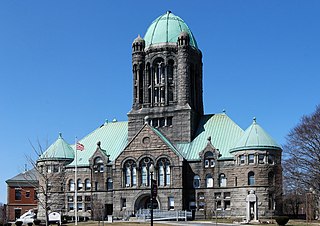 Essex County is a county in the northeastern part of the U.S. state of Massachusetts. At the 2020 census, the total population was 809,829, making it the third-most populous county in the state, and the eightieth-most populous in the country. It is part of the Greater Boston area. The largest city in Essex County is Lynn. The county was named after the English county of Essex. It has two traditional county seats: Salem and Lawrence. Prior to the dissolution of the county government in 1999, Salem had jurisdiction over the Southern Essex District, and Lawrence had jurisdiction over the Northern Essex District, but currently these cities do not function as seats of government. However, the county and the districts remain as administrative regions recognized by various governmental agencies, which gathered vital statistics or disposed of judicial case loads under these geographic subdivisions, and are required to keep the records based on them. The county has been designated the Essex National Heritage Area by the National Park Service. 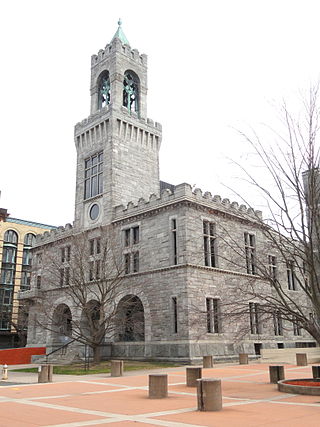 Middlesex County is located in the Commonwealth of Massachusetts, in the United States. As of the 2020 census, the population was 1,632,002, making it the most populous county in both Massachusetts and New England and the 22nd most populous county in the United States. Middlesex County is one of two U.S. counties to be amongst the top 25 counties with the highest household income and the 25 most populated counties. It is included in the Census Bureau's Boston–Cambridge–Newton, MA–NH Metropolitan Statistical Area. As part of the 2020 United States census, the Commonwealth's mean center of population for that year was geo-centered in Middlesex County, in the town of Natick. 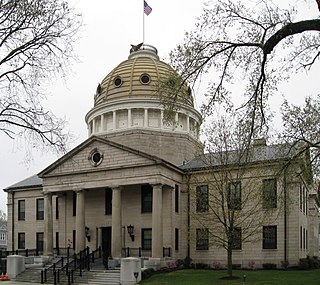 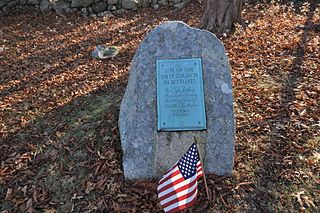 Plymouth County is a county in the U.S. state of Massachusetts, south of Boston. As of the 2020 census, the population was 530,819. Its county seats are Plymouth and Brockton. In 1685, the county was created by the Plymouth General Court, the legislature of Plymouth Colony, predating its annexation by the Massachusetts Bay Colony. 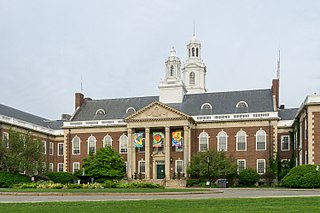 Newton is a city in Middlesex County, Massachusetts, United States. It is approximately 7 miles (11 km) west of downtown Boston. Newton resembles a patchwork of thirteen villages, without a city center. According to the 2020 U.S. Census, the population of Newton was 88,923.

Cohasset is a town in Norfolk County, Massachusetts, United States. As of the 2020 census the population was 8,381. 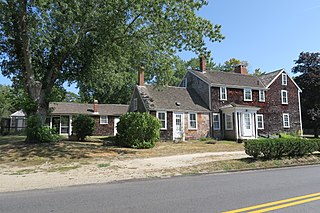 Norwell is a town in Plymouth County, Massachusetts, United States. The population was 11,351 at the 2020 United States census. The town's southeastern border runs along the North River.

Revere is a city in Suffolk County, Massachusetts, United States, located approximately 5 miles (8.0 km) from downtown Boston. Founded as North Chelsea in 1846, it was renamed in 1871 after the American Revolutionary War patriot Paul Revere. In 1914, the Town of Revere was incorporated as a city. As of the 2020 United States Census, the city has a population of 62,186 inhabitants.

Winthrop is a town in Suffolk County, Massachusetts, United States. The population was 19,316 at the 2020 census. Winthrop is an ocean-side suburban community in Greater Boston situated at the north entrance to Boston Harbor, close to Logan International Airport. It is located on a peninsula, 1.6 square miles (4.2 km2) in area, connected to Revere by a narrow isthmus and to East Boston by a bridge over the harbor inlet to the Belle Isle Marsh Reservation. 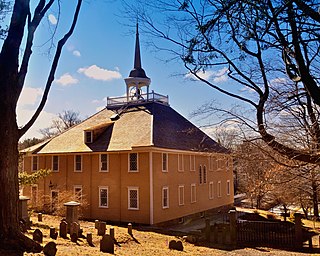 Hingham is a town in metropolitan Greater Boston on the South Shore of the U.S. state of Massachusetts in northern Plymouth County. At the 2020 census, the population was 24,284. Hingham is known for its colonial history and location on Boston Harbor. The town was named after Hingham, Norfolk, England, and was first settled by English colonists in 1633.

Norfolk and Suffolk is a district of the Massachusetts Senate. It covers 13.1% of Norfolk County and 9.4% of Suffolk County population in 2010. Democrat Mike Rush of West Roxbury has represented the district since 2011.

Massachusetts House of Representatives' 4th Norfolk district in the United States is one of 160 legislative districts included in the lower house of the Massachusetts General Court. It covers parts of Norfolk County and Plymouth County. Democrat James Murphy of Weymouth has represented the district since 2001. Candidates for this district seat in the 2020 Massachusetts general election are Paul Rotondo and incumbent James Murphy.

Massachusetts House of Representatives' 13th Suffolk district in the United States is one of 160 legislative districts included in the lower house of the Massachusetts General Court. It covers part of Quincy in Norfolk County and part of Boston in Suffolk County. Democrat Dan Hunt of Dorchester has represented the district since 2014.