Sulaiman Nadvi Nadvi was born on 22 November 1884 in the Desna, Bihar a village of Patna (then in British India). His father, Hakeem Sayyed Abul Hasan was a Sufi. [1] [2]

Sulaiman Nadvi was influenced by Shibli Nomani at Lucknow. In 1906, he graduated from Nadva. In 1908, Nadvi was appointed as an instructor of Modern Arabic and Theology at Dar-ul-Uloom Nadva. His contemporary at Nadva was Abul Kalam Azad who had come from Calcutta and also joined the Nadva. [1] Both Sulaiman Nadvi and Abul Kalam Azad were favorite pupils of Maulana Shibli Nomani. [1] Sulaiman Nadvi became one of the biographers of the Prophet of Islam and a historian during his own lifetime. [1]

Aligarh Muslim University conferred on him the honorary degree of Doctorate of Literature (DLitt) in 1941. [1]

In 1933, he published one of his major works, Khayyam. The nucleus of this book was an article on noted Persian scholar and poet Omar Khayyam. [3] [4] [2]

Sulaiman Nadvi, along with others who favored Hindu-Muslim unity in British India, suggested that the term "Urdu" be abandoned in favour of "Hindustani" because the former conjured up the image of a military conquest and war whereas the latter had no such symbolic baggage. [5]

In June 1950, Nadvi moved to Pakistan and settled in Karachi. He was appointed Chairman of Taleemat-e-Islami Board to advise on Islamic aspects of Pakistan's constitution. He died on 22 November 1953 in Karachi at the age of 69. [6] [2]

However, his son Salman Nadwi asserts that they didn't move to Pakistan with the intention of migration. Right after they reached Pakistan, Sulaiman Nadwi's health detiorated and he tried unsuccessfully to get his permit extended from the Indian embassy, which caused grief and pain. [7]

Shibli Nomani was an Islamic scholar from the Indian subcontinent during British Raj. He was born at Bindwal in Azamgarh district of present-day Uttar Pradesh. He is known for the founding of the Shibli National College in 1883 and the Darul Mussanifin in Azamgarh. Shibli was a scholar in Arabic, Persian, Turkish and Urdu. He was also a poet. He collected much material on the life of the Prophet of Islam, Muhammad but could write only first two volumes of the planned work the Sirat-un-Nabi. His disciple, Sulaiman Nadvi, made use of this material and added to it and also wrote remaining five volumes of the work, the Sirat-un-Nabi after the death of his mentor.

Muhammad Taqi Usmani is a Pakistani Islamic scholar and former judge who is Vice President and Shaykh al-Hadith at Darul Uloom Karachi. An intellectual leader of the Deobandi movement, he has authored more than 80 books in Urdu, Arabic and English, including a translation of the Qur'an in both English and Urdu as well a 6-volume commentary on the Sahih Muslim in Arabic, having written and lectured extensively on hadith, and Islamic finance. He chairs the Shariah Board of the Bahrain-based Accounting and Auditing Organization for Islamic Financial Institutions (AAOIFI). He is also a permanent member of the Jeddah-based International Islamic Fiqh Academy, an organ of the OIC.

Mohammad Ajmal Khan, better known as Hakim Ajmal Khan, was a physician in Delhi, India, and one of the founders of the Jamia Millia Islamia University. He also founded another institution, Ayurvedic and Unani Tibbia College, better known as Tibbia College, situated in Karol Bagh, Delhi. He became the university's first chancellor in 1920 and remained in office until his death in 1927.

Darul Uloom Nadwatul Ulama translated to English as House of Knowledge & Assembly of Scholars University is an Islamic institution at Lucknow, India. 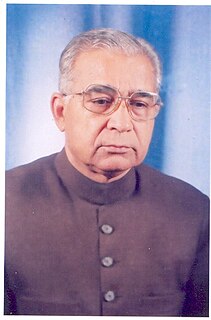 Hakim Syed Zillur Rahman is an Indian scholar of Unani medicine. He founded Ibn Sina Academy of Medieval Medicine and Sciences in 2000. He had earlier served as Professor and chairman, Department of Ilmul Advia at the Ajmal Khan Tibbiya College, Aligarh Muslim University (AMU), Aligarh, for over 40 years before retiring as Dean Faculty of Unani Medicine. Presently, he is serving AMU as "Honorary Treasurer". In 2006, the Government of India awarded him the Padma Shri for his contribution to Unani Medicine.

Sirat-un-Nabi belongs to the genre of Sirah Rasul Allah. It was written in Urdu by Shibli Nomani and his student, Sulaiman Nadvi in 7 volumes.

Muḥammad Manz̤oor Nomānī was an Indian Islamic scholar. Prominent among his written works are Maariful Hadith, Islam Kya Hai?, and Khomeini and the Iranian Revolution.

Professor (Maulana) Abdul Bari Nadvi was born in 1886 in the Barabanki district near Lucknow in the UP Province of India. His father Hakim Abdul Khaliq was a student of Maulana Mohammad Naeem Farangi Mahli. His younger brother Saad-ud-Din Ansari was among the founding members of the Jamia Millia Delhi. Abdul Bari Nadwi died in Lucknow on 30 January 1976. He is survived by four sons and two daughters.

Abdul Qavi Desnavi was an Indian Urdu language writer, critic, bibliographer and linguist. He wrote many books on Urdu literature. His work included about Maulana Abul Kalam Azad, Mirza Ghalib and Allama Muhammad Iqbal. He was awarded with several awards for his literary work.

Mohammad Rabey Hasani Nadwi is an Indian Sunni Islamic scholar, imcumbent President of All India Muslim Personal Law Board, incumbent Chancellor of Darul-uloom Nadwatul Ulama, incumbent Vice President of the Aalami Rabita Adab-e-Islami, Riyadh (K.S.A.) and a founding member of Muslim World League. He is President of Majlis-e-Tehqiqat-o-Nashariyat Islam, Lucknow, President of Deeni Taleemi Council, Uttar Pradesh, President of Dare Arafat, Raebareli, Member of Darul Musannifeen, Azamgarh, Trustee of Oxford Centre for Islamic Studies, Oxford University, U.K., Patron of Payam-e-Insaniyat, and Patron of Islamic Fiqh Academy, India. He has been regularly listed among the 500 Most Influential Muslims of the world.

Salman Husaini Nadwi is an Indian scholar and professor in the Islamic sciences. He is an author of numerous scholarly works in Arabic and Urdu. Salman Nadwi served as the Dean of the Faculty of Dawah at the Darul-uloom Nadwatul Ulama madrasa in Lucknow.

Syed Mohammed Saeed Raza was a Muslim professor and scholar.

Murtaza Hasan Chandpuri (1868-1951) was an Indian Sunni Islamic scholar. He was a disciple of Ashraf Ali Thanwi in the Chishti order of Sufism.

Sayyid Mumtaz Ali Deobandi was an Indian Sunni Muslim scholar and an advocate of women rights in the late nineteenth century. He was an alumnus of Darul Uloom Deoband. His book Huquq-e-Niswan and the journal Tehzeeb-e-Niswan that he started with his wife Muhammadi Begum are said to be pioneering works on women rights.

Zafeeruddin Miftāhi was an Indian Muslim scholar and jurist who served as the thirteenth Grand Mufti of Darul Uloom Deoband and the second president of Islamic Fiqh Academy. He compiled the religious verdicts of Azizur Rahman Usmani, called the Fatāwa Darul Uloom Deoband in twelve volumes and wrote books including Islām Ka Nizām-e-Masājid, Islām Ka Nizām Iffat-o-Asmat and Tārīkh-e-Masājid. He was also a member of Board of Studies at the Sunni Theology department of Aligarh Muslim University.