Sun reached a career-high singles ranking of world No. 77 in March 2007, winning her only WTA Tour singles title at the 2006 Tashkent Open, and a career-high doubles ranking of No. 16 in October 2007, winning eleven WTA titles and reaching the quarterfinals of three Grand Slam women's doubles tournaments, and winning the mixed doubles event at the 2008 Australian Open alongside Nenad Zimonjić.

In September 2000, Sun won two successive $10k singles titles, a feat she would repeat in June 2001, when she won another two back-to-back.

In 2003, she reached the final of a $50k tournament at Modena despite entering as a lucky loser to countrywoman Yan Zi in the final round of qualifying. Having defeated several high-quality opponents in the forms of Martina Suchá, Maret Ani and Gala León García, she lost in the final against Melinda Czink.

This year, she also gained entry into several WTA tournaments, most notably coming through qualifying at Doha by defeating Yuliana Fedak, Ľubomíra Kurhajcová and María Sánchez Lorenzo, only to lose in the deciding set of her opening round match against Nicole Pratt; and at the US Open after a narrow victory over Selima Sfar, only to lose to Saori Obata at the first hurdle in the main draw. But she finished the year ranked world No. 141.

In 2004, she qualified for the Australian Open after a win over Roberta Vinci, then qualified for Doha for the second year running. She went on to record impressive wins over Eva Birnerová and Sandra Kleinová to qualify for Miami; and over Camille Pin and Mara Santangelo to qualify for Amelia Island, where she also beat Cara Black in the main draw first round. At Wimbledon, she qualified with a win over Barbara Schwartz and won her first-round tie against Tathiana Garbin before succumbing to Anne Kremer in Round Two. At the end of the year, she lost in a tight three-set final in the first $50k Shenzhen tournament to countrywoman Li Na. Her year-end ranking had improved to world No. 118.

Sun also competed in the Summer Olympics, defeating Conchita Martínez and Virginia Ruano Pascual of Spain in the women's tennis doubles final to win a gold medal along with her partner Li Ting.

In 2005, she reached her first WTA singles quarterfinal at Hyderabad, defeating Tamarine Tanasugarn 6–2, 6–1 in the second round before losing a close match against prominent German player Anna-Lena Grönefeld 6–7, 3–6. After several near-misses in qualifying, she again made her mark in August; both at Los Angeles, where she took French star Marion Bartoli to three sets in the second round, and in the US Open, where she qualified with convincing straight-sets wins over Marlene Weingärtner and Ľudmila Cervanová and went on to defeat Samantha Stosur 6–3, 7–6 in the first round of the main draw before succumbing to Anabel Medina Garrigues of Spain. But her career-best win to date was yet to come the following month at Beijing, where she defeated former world No. 1 player Serena Williams in the second round after an easy first-round victory over Tatiana Panova of Russia, only to be outperformed in her second WTA quarterfinal by rising star Maria Kirilenko. This run of results propelled her to a career-best ranking of world No. 88, but by the close of the year, she had slipped back slightly to world No. 105.

Early in 2006, Sun suffered some extremely tough draws, but fought every inch of the way in tight three-set losses to Amélie Mauresmo in the first round of the Australian Open and Nuria Llagostera Vives in the first round at Gold Coast, only to lose in qualifying for Doha and Dubai.

At the Tashkent Open, Sun fought her way past Iroda Tulyaganova in the final to win the first WTA Tour title of her career and became only the fourth Chinese woman to win a WTA title. On 9 October 2006, she moved to a new career high of world No. 81.

She is one of only two active players (the other is Sybille Bammer of Austria) to have a winning record against Serena Williams. In their only meeting, she defeated Williams 6–2, 7–6 in the round of 16 at Beijing in 2005.

On 27 January 2008, Sun captured her first Grand Slam title when she won the Australian Open mixed doubles crown, partnering with Nenad Zimonjić. The pair defeated Sania Mirza and Mahesh Bhupathi in two sets. They won the title with their fifth championship point.

Li Ting is a Chinese former professional tennis player. She won the gold medal at the 2004 Summer Olympics in women's doubles alongside Sun Tiantian.

The 2006 Sony Ericsson WTA Tour was the 36th season since the founding of the Women's Tennis Association. It commenced on January 2, 2006, and concluded on November 12, 2006 after 61 events.

Peng Shuai is a Chinese professional female tennis player. She reached a career-high of world No. 1 in the doubles ranking by the WTA as the first Chinese tennis player in February 2014. In August 2011, she peaked at No. 14 of the singles rankings. Peng has won two singles and 22 doubles titles. She won a gold medal at the 2010 Asian Games, defeating Akgul Amanmuradova in the final. At the 2013 Wimbledon Championships, Peng won her first ladies' doubles championship with Hsieh Su-wei of Taiwan and again won at the 2014 French Open with Hsieh. Her best performance at a Grand Slam tournament in singles came at the 2014 US Open when she reached the semifinals, becoming the third Chinese tennis player in history to make a major semifinal after Zheng Jie and Li Na. 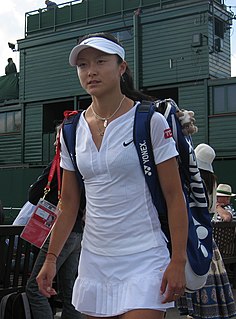 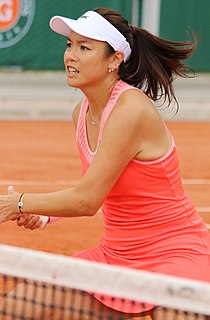 Latisha Chan, formerly known by her Chinese name Chan Yung-jan, is a Taiwanese professional tennis player. She is known mainly for her success in doubles competitions, having won 33, including one major women's doubles title: the 2017 US Open, and three mixed-doubles titles: the 2018 French Open, 2019 French Open, and 2019 Wimbledon Championships. She also finished runner-up in three other Grand Slam finals: the 2007 and 2015 Australian Open, as well as the 2007 US Open. Highlights of her singles career include the semifinals at the 2006 Japan Open and the final at the PTT Bangkok Open in 2007. She reached her career-high singles ranking of No. 50 on 11 June 2007, and doubles ranking of No. 1 on 23 October 2017, becoming the second-ever Taiwanese world No. 1 doubles player, after compatriot Hsieh Su-wei. She has been to the top-ranking in WTA doubles once more a year later on 13 August 2018. 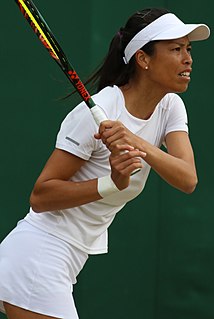 Hsieh Su-wei is a Taiwanese professional tennis player who represents Chinese Taipei in international competition, and is the current world No. 1 in doubles. 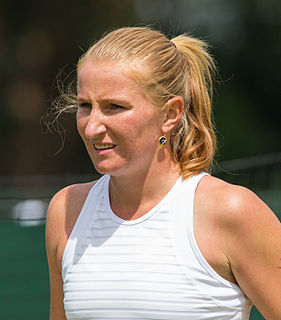 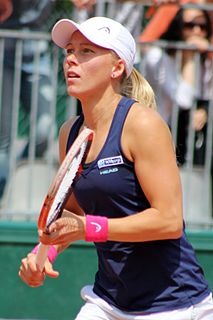 Ana Bogdan is a Romanian professional tennis player. Having made her tour debut in 2007, she peaked at no. 59 in the world rankings in June 2018. 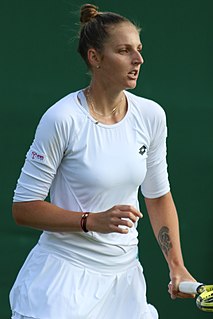 Zheng Jie is a retired tennis player from China. In May 2009, she achieved a career-high singles ranking of world No. 15.