Sunniside is a district of Sunderland, North East England, towards the eastern side of the city centre, bounded to the west by Fawcett Street, to the south by Borough Road, and to the north and east by the Inner Ring road. A significant programme of urban development has established Sunniside as a centre of culture, film, dining, entertainment and art in the city. It is also known as the historic heart of Sunderland's legal and real estate sectors, with many solicitors and estate agencies based in the area.

Sunniside grew up in the Victorian Era as the original business centre of Sunderland. At the height of Sunderland's power as a shipbuilding centre, most of the mercantile insurance and reinsurance companies and other associated business functions were based in Sunniside, as were a substantial number of foreign consulates, including the Netherlands, Denmark and Russia. Situated between West Sunniside and Norfolk Street is the old General Post Office building, now converted to residential use.

As the economic fortunes of Sunderland waned in the 1980s, however, many of the lucrative businesses left Sunniside and many others moved westward to new locations in the city centre and out of town, leaving the area to become plagued by urban decay. In the late 1990s, the Sunniside district was earmarked by the local council as a priority for urban renewal.

In 2003, Sunderland's area regeneration company, Sunderland Arc released 15 year long proposals for Urban regeneration in the area, and they worked with the One Northeast regional redevelopment corporation and the city council to begin improvements on Sunniside with an investment. [1]

In 2007, the first redevelopment was completed; bringing the old Sunniside Gardens back to life with a complete makeover and a modern iconic sculpture to go along with it. [2] and the following year after that new bars and cafes in the area were opened, along with the new £6 million development arts centre, "ThePlace". [3] [4]

The regeneration projects of Sunniside have won two national awards for their revival of that area of the city. In 2007, the area won an award from the Landscape Institute Awards [5] and in 2008 Sunniside the North East Renaissance Award from the Royal Institution of Chartered Surveyors.

Sunniside is home to the film company Tanner Films Ltd. which was set up in 2008. The company's first film, a crime drama called "King of the North" starring Angus MacFadyen, is currently under production after it secured a £6 million deal from MonteCristo at the Cannes film festival. [6]

Because of the regeneration projects and other private investment, Sunniside now has a strong range of attractions: 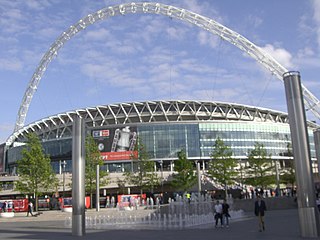 Wembley is the principal town of the borough of Brent in north west London, England, about 8 miles (13 km) west-northwest of Charing Cross. Wembley was formed a separate civil parish from 1894 and was incorporated as a municipal borough of Middlesex in 1937. In 1965, the area merged with the Municipal Borough of Willesden to create the London Borough of Brent, and has since formed part of Greater London.

Gateshead is a town in Tyne and Wear, England, on the southern bank of the River Tyne opposite Newcastle upon Tyne. Gateshead and Newcastle are joined by seven bridges across the Tyne, including the Gateshead Millennium Bridge. The town is known for its architecture, including the Sage Gateshead, the Angel of the North and the Baltic Centre for Contemporary Art. Residents of Gateshead, like the rest of Tyneside, are referred to as Geordies. Gateshead's population in 2011 was 120,046.

The University of Sunderland is a university located in Sunderland in the North East of England. Its predecessor, Sunderland Technical College, was established as a municipal training college in 1901. It gained university status in 1992. It now has campuses in Sunderland, London and Hong Kong.

The Custard Factory is an independent shopping destination and creative and digital business workspace location in Deritend Birmingham, England. 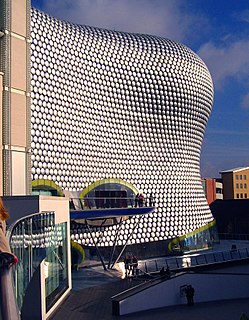 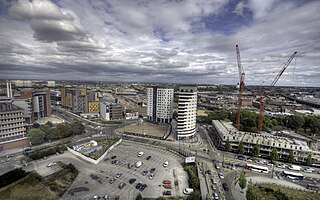 Eastside is a district of Birmingham City Centre, England that is undergoing a major redevelopment project. The overall cost when completed is expected to be £6–8 billion over ten years which will result in the creation of 12,000 jobs. 8,000 jobs are expected to be created during the construction period. It is part of the larger Big City Plan project.

South Acton in Acton, west London, is 6.4 miles (10.3 km) west of Charing Cross. At the 2001 census, Acton, comprising the wards of East Acton, Acton Central, South Acton and Southfield, had a population of 53,689 people.

Clyde Waterfront is a 20 km stretch of the River Clyde, Scotland, running east–west from Glasgow Green in the heart of Glasgow, to Dumbarton on the Firth of Clyde. With over 200 projects on both sides of the Clyde, this is one of Britain's largest urban renewal projects. Throughout the Clyde Waterfront area, projects are in place to transform business, housing, tourism and the infrastructure of the area. The total anticipated investment in Clyde Waterfront from public and private money is now estimated at £5-6 billion.

Sunderland Arc was a privately owned, non-profit, urban regeneration company based in Sunderland, North East England. It ceased operations in 2011.

The Spirit of Sunderland was a skyscraper proposed for Sunderland, North East England, by the designs of Sunderland Arc and Thornfield Properties Ltd. The tower was part of the Holmeside Triangle regeneration plan, a project to establish the area as a thriving, attractive modern area of retail.

Bradford City Park is a public space in the centre of Bradford, West Yorkshire. It is centred on the Grade I listed Bradford City Hall. The city park comprises three main areas To the east of the City Hall is the Norfolk Gardens area. As part of the renovations to City Park an underused concrete footbridge was removed and a new bus canopy was installed. In front of City Hall is Centenary Square. This area was extensively landscaped and now comprises raised lawns, seating and a large area of stone sets. This area is used for exhibition space and market stalls during the European markets. The north-western corner of the park is the mirror pool and its surrounds. Construction of this section begun in 2011 and was officially opened on 24 March 2012 with an all-day celebratory event featuring parkour, fireworks, balloons and other attractions

Marina One is a mixed-use development bounded by Marina Way and Straits View in Marina South, Singapore, within walking distance of Marina Bay MRT station. The area has been earmarked by the Urban Redevelopment Authority to be a vibrant new growth area for residential, commercial and lifestyle activities.