Sunthorn Kongsompong (Thai : สุนทร คงสมพงษ์, RTGS: Sunthon Khongsomphong, IPA:  [sǔn.tʰɔːn kʰoŋ.sǒm.pʰoŋ] ; 1 August 1931 – 2 August 1999) was the de facto head of government of Thailand from 1991 to 1992, after a military coup d'etat led by Sunthorn and General Suchinda Kraprayoon deposed the government of Prime Minister Chatichai Choonhavan on February 23, 1991. The generals accused Chatichai of corruption, and established the National Peacekeeping Council (NPKC) as an interim administration, with Sunthorn as chairman.

Anand Panyarachun was appointed Prime Minister in March, 1991, but the administration of the country was also executed by the NPKC.

Sunthorn left the political office following the May 1992 constitution promulgation, which prohibited members of the military from executing the office of the Prime Minister. [1]

His son is Apirat Kongsompong, who from 2018 to 2020 was Commander in Chief of the Royal Thai Army. 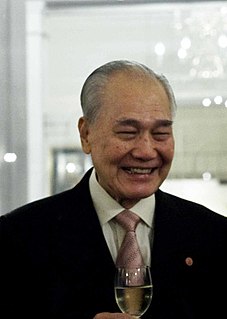 Anand Panyarachun was Thailand's Prime Minister twice: once in 1991–1992 and again during the latter half of 1992. He was effective in initiating economic and political reforms, one of which was the drafting of Thailand's "Peoples' Constitution", which was promulgated in 1997 and abrogated in 2006. Anand received a Ramon Magsaysay Award for Government Service in 1997.

The history of Thailand from 1973 to 2001 saw an unstable period of democracy, with military rule being reimposed after a bloody coup in 1976.

Thai Nation Party, or Chart Thai Party was a conservative political party in Thailand. It was dissolved by the Constitutional Court of Thailand on December 2, 2008, along with the People's Power Party and the Neutral Democratic Party, for having violated electoral laws in the 2007 Thai general election. Thereafter, most MPs founded the Chartthaipattana Party, which became the Thai Nation Party's successor. 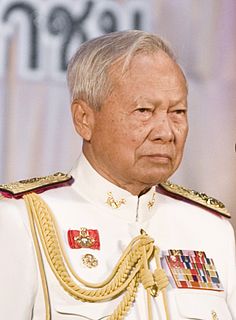 Prem Tinsulanonda was a Thai military officer, politician, and statesman who served as the Prime Minister of Thailand from 3 March 1980 to 4 August 1988, during which time he was credited with ending a communist insurgency and presiding over accelerating economic growth. As president of the Privy Council, he served as Regent of Thailand from the death of King Bhumibol Adulyadej on 13 October 2016, until the 1 December 2016 proclamation of Vajiralongkorn as King. At the age of 98, Prem was the longest-living Thai Prime Minister. 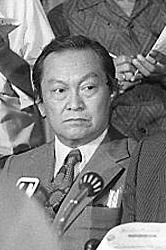 Chatichai Choonhavan was a Thai army officer, diplomat and politician. From 1986 to 1991, he was the chairman of the Thai Nation Party and served as the Prime Minister of Thailand from August 1988 until the coup d'état of February 1991.

Suchinda Kraprayoon was Prime Minister of Thailand from 7 April 1992 until 24 May 1992. Suchinda, son of Juang and Sompong Kraprayoon, was born 6 August 1933 in the Thonburi, Siam, and is of Chinese and Mon descent.

Banharn Silpa-archa was a Thai politician. He was the Prime Minister of Thailand from 1995 to 1996. Banharn made a fortune in the construction business before he became a Member of Parliament representing his home province of Suphan Buri. He held different cabinet posts in several governments. In 1994, he became the leader of the Thai Nation Party. In 2008, the party was dissolved by the Constitutional Court and Banharn was banned from politics for five years.

Meechai Ruchuphan is a Thai legal expert and politician who served as acting Prime Minister of Thailand in 1992.

Anupong Paochinda is a Thai politician and retired army officer. He held the position of Commander-in-Chief of the Royal Thai Army from 2007 until his retirement on 30 September 2009. 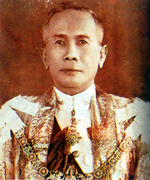 The Siamese coup d'état of 1947 was a Thai coup d'état that took place on the evening of 7 November 1947, ending in the early morning hours of 8 November. The coup ousted the government of Rear Admiral Thawan Thamrongnawasawat, who was replaced by Khuang Aphaiwong as Prime Minister of Thailand. The coup was led by Lieutenant-General Phin Chunhawan and Colonel Kat Katsongkhram. 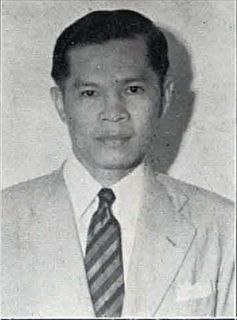 Pramarn Adireksarn was a Thai military officer and politician. He was a co-founder and chairman of the Thai Nation Party, deputy prime minister and minister in several cabinets.

Korn Dabbaransi is a Thai politician. He was the leader of the National Development Party from 1998 to 2003. Korn served as deputy prime minister and as a cabinet minister in several governments. He currently serves as the President of the Thai-Chinese Friendship Association.

Isarapong Noonpakdee was a Thai military officer who was Commander of the Royal Thai Army in 1992. Isarapong played a key role in the coup against the government of then Gen.Chatichai Choonhavan when he was deputy Army commander-in-chief. He became the secretary-general of the National Peacekeeping Council (NPKC) or the coup maker. Isarapong became the interior minister in the post-coup government of Anand Panyarachun. He later succeeded Gen.Suchinda Kraprayoon as Commander in Chief of the Royal Thai Army when Suchinda became the prime minister. He has received the Bravery Medal in 1991.

The year 1991 was the 208th year of the Rattanakosin Kingdom of Thailand. It was the 46th year of the reign of King Bhumibol Adulyadej, and is reckoned as the year 2534 in the Buddhist Era. Significant events include the coup d'état against the government of Chatichai Choonhavan.

Apirat Kongsompong (Thai: อภิรัชต์ คงสมพงษ์; RTGS: Aphirat Khongsomphong; born 23 March 1960, was the Commander in Chief of the Royal Thai Army from 1 October 2018 to 30 September 2020 He previously served as Assistant Commander in Chief from October 2017 to September 2018 and the Commanding General of the 1st Army Area from October 2016 to September 2017. General Apirat Kongsompong also serves as the Chairman of the Board of Directors of Government Lottery Office, and was formerly an Independent Director at Bangchak Petroleum Public Co., and a member of the National Legislative Assembly.