Last updated April 29, 2022
Cable-stayed bridge across the Madura strait between Surabaya and Madura

The Suramadu Bridge (Indonesian : Jembatan Suramadu), also known as the Surabaya–Madura Bridge, is a cable-stayed bridge between Surabaya on the island of Java and the town of Bangkalan on the island of Madura in Indonesia. [4] Opened in June 2009, [5] the 5.4-km bridge is the longest in Indonesia and the second longest in southern hemisphere. It is the first bridge to cross the Madura Strait. [6]

The idea of a bridge connecting Surabaya with Madura is said to have first been proposed in the early 1960s by the well-known Indonesian engineer Professor Sedyatmo from the Bandung Institute of Technology. Later, in the mid-1980s, there was renewed interest in the project when staff from the National Development Planning Bureau (Bappenas) met with Japanese aid donors to discuss construction of a bridge. [8] A pre-feasibility study was prepared in early 1990 and in December 1990, President Suharto appointed a team of ministers and advisers to consider plans for the bridge. [9] Later, a consortium consisting on the Indonesian state-owned firm PT Jasa Marga  [ id ] and other Indonesian firms along with Japanese firms (Mitsubishi Corporation, Itochu, Shimizu, and the Long Term Credit Bank) was established to proceed with the bridge.

In 1997-98, a range of problems arising from the Asian financial crisis in Indonesia led to suspension of activities. However within a few years the East Java Provincial Government took up a renewed interest in plans and in 2000 announced that further initiatives would be taken at the provincial level. These steps gained impetus when President Megawati issued a decree instructing ministers to take additional steps to support construction of the bridge and appointing PT Jasa Marga as the lead Indonesian firm for the project. [10]

The bridge was built by a consortium of Indonesian companies PT Adhi Karya and PT Waskita Karya working with China Road and Bridge Corp. and China Harbor Engineering Co. Ltd. The total cost of the project, including connecting roads, has been estimated at Rp4.5 trillion (US$445 million). [11]

Within a week of the opening, it was discovered that nuts and bolts as well as maintenance lamps had been stolen and that there was evidence of vandalism of cables supporting the main span. [14]

As is often the case with public sector infrastructure facilities in Indonesia, there has been pressure to keep the tariffs for use of the bridge low. Tolls were initially set at Rp30,000 (US$3 in 2009) for four-wheeled vehicles and Rp3,000 (US$0.30) for two-wheelers. [15] However, in early 2016, it was announced that President Jokowi favored a 50% cut in the tolls to help promote the competitiveness of industries on the Madura side of the bridge.

No details were available as to how the cuts in the tolls would be funded. [16] However, a spokesperson for the state-owned company PT Jasa Marga which operated the bridge said that the reductions in tariffs would not cause a problem for the operating firm itself because Jasa Marga was paid directly by the government to manage the bridge. [17] 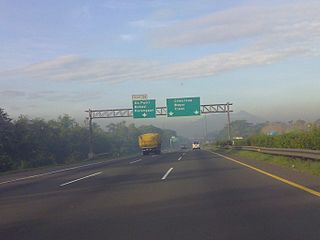 The Jagorawi Toll Road is Indonesia's first toll road. Construction on the highway began in 1973, and it was officially opened on March 9, 1978. 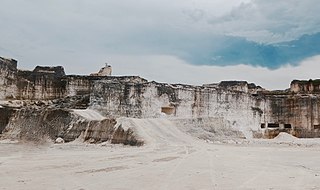 Bangkalan Regency is a regency of East Java province in Indonesia. The seat of its government is Bangkalan. The regency is located on the west side of Madura Island, bordering with Sampang Regency to the east, Java Sea to the north and Madura Strait to the west and the south sides. It covers an area of 1,260.14 km2, and had a population of 906,761 at the 2010 Census and reached 1,060,377 at the 2020 Census. 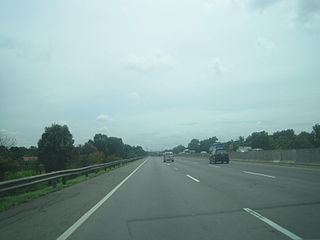 The Jakarta–Cikampek Toll Road or Japek toll road is an expressway that was inaugurated in 1988. The highway links Jakarta with cities to its east in the province of West Java, in Indonesia.

e-toll or e-toll card is a contactless smart card used by Indonesian toll road drivers to pay the toll fee. The card is issued by Bank Mandiri in cooperation with 3 toll operators. This card used the RFID system.

Jakarta Inner Ring Road, also known as the Jakarta Inner-City Toll Road is a toll road circling the city of Jakarta, Indonesia. On northern and the eastern section, the toll road is grade-separated with the Sosrobahu road construction technique. The toll road is operated by PT Jasa Marga (Persero) Tbk, a state-owned enterprise, and PT Citra Marga Nushapala Persada Tbk (CMNP), founded by the Suharto family which is also the initiator of the Metro Manila Skyway.

The Trans-Java Toll Road is a tolled expressway network that runs from Merak, northwestern end of Java to Banyuwangi, the eastern end of the island in Indonesia. The toll road connects all major cities of the island. The total length of the road is 1,167 kilometres (725 mi).

Solo–Kertosono Toll Road is part of Trans-Java toll road in the island of Java, Indonesia. The toll road connects to Semarang–Solo Toll Road in the west, and in the east it connects to Kertosono–Mojokerto Toll Road. This toll road has a total length of 177.12 km comprise two segments, segment Solo–Ngawi and segment Ngawi–Kertosono. The road passes through eight regions: Boyolali Regency, Karanganyar Regency, Solo City, Sragen Regency in Central Java Province, and Ngawi, Madiun, Nganjuk and Jombang Regency in East Java Province. When commencing operation, Solo–Kertosono Toll Road, known as Soker Toll Road. The toll road is the longest toll road in Indonesia.

Surabaya–Mojokerto Toll Road or Sumo Toll Road, is a part of Trans-Java toll road in Java, Indonesia, that length of the toll road is 36.1 kilometres.

Bogor-Ciawi–Sukabumi Toll Road or Bocimi Toll Road is a highway of 53.6-kilometer toll road link, which is under construction that will connect Bogor Regency, Bogor city, Sukabumi Regency and Sukabumi city in West Java, Indonesia. The 15.35-kilometer first section of the toll road between Ciawi and Cigombong was inaugurated by Indonesia's President Joko Widodo on 3 December 2018.

Bekasi-Cawang-Kampung Melayu Toll Road or Becakayu is a toll road constructed over the Kalimalang River in East Jakarta and Bekasi, Indonesia to decrease traffic congestion around Kalimalang. 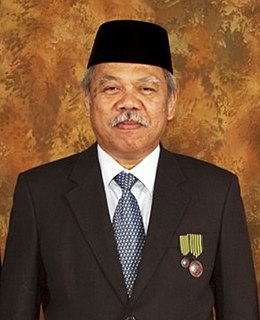 Mochamad Basuki Hadimuljono is an Indonesian bureaucrat who currently serves as the Minister of Public Works and Public Housing under Joko Widodo. Before his appointment as minister, he had worked for the Indonesian Ministry of Public Works for nine years.

Cinere–Serpong Toll Road is one of the toll roads which are part of the Jakarta Outer Ring Road 2 which will connect to connect with the Kunciran–Serpong Toll Road in the west and the Cinere–Jagorawi Toll Road in the east. This toll road that connects South Tangerang with Depok, crosses several areas, such as Jombang, Ciputat, Pamulang, Pondok Cabe and Cinere. The toll road will be managed by PT Cinere Serpong Jaya (CSJ), the majority of whose shares are owned by PT Jasa Marga. The toll road is now under construction which is expected to be operational in 2019.

Gempol–Pandaan Toll Road is a toll road in East Java, Indonesia. This 13.6 kilometers (8.5 mi) highway connects Gempol and with Pandaan of Pasuruan Regency. The toll road is opened in May, 2015. This toll road is a continuation of the Surabaya–Porong Toll Road that will be connected to Pandaan-Malang Toll Road. This toll was built to help lessen the traffic congestion on the existing inter-city roads connecting Surabaya and Malang.

The Sheikh Mohammed bin Zayed Skyway, formerly known as the Jakarta–Cikampek Elevated Toll Road, is a 36.4-kilometre-long (22.6 mi) elevated expressway that extends from Cikunir, Bekasi, to Karawang in West Java, Indonesia, operated by PT Jasamarga Jalanlayang Cikampek, a subsidiary of PT Jasa Marga Tbk with PT Ranggi Sugiron Perkasa as minority shareholder. It passes over some sections of the existing Jakarta–Cikampek Toll Road. It is the longest flyover in Indonesia, and the longest elevated double decker expressways in Southeast Asia. The toll road was opened by President Joko Widodo on 11 December 2019 and was renamed after Mohammed bin Zayed Al Nahyan in 8 April 2021 at the behest of the President's secretary.