Mysore Seshaiah Suresh Babu Naidu, known mononymously as Suresh, is an Indian actor, producer, director, and dubbing artist. He has acted in 270 films, predominantly in Telugu and Tamil languages. [2]

Suresh started his career as an editing assistant and a dance assistant. One of his father's friends thought that he could become a successful lead actor. Suresh approached director C. V. Sridhar with a portfolio but was turned down. A few years later, Suresh played the lead in three of Sridhar's films. He then met director duo Santhana Bharathi and P. Vasu, who cast him as the lead in Panneer Pushpangal (1981). [3] Suresh was simultaneously offered the lead role in Bharathiraja's Alaigal Oivathillai (1981), which he turned down for the former film. Both films were large commercial successes. [4] He became the prominent face of the Tamil Film Industry, through the 80’s era. Suresh played the role of a lover in many films and produced four films and seven television serials before taking a hiatus in the 1990s. During the period he enhanced his career in Telugu cinema.

Suresh made a comeback to Tamil cinema in 2006 with Kizhakku Kadalkarai Salai starring Srikanth. He played supporting roles including in Aasal (2010) alongside Ajith Kumar. [5] In 2012, Suresh appeared in the Tamil-Telugu bilingual film Kadhalil Sodhappuvadhu Yeppadi directed by Balaji Mohan, playing the character of Akilan Venkatesan, who was going through a mid-life crisis. A reviewer for The Hindu called the entire cast "effective". [6]

From 2018 to 2020, he has starred opposite Khushbu Sundar in the bilingual daily serial Lakshmi Stores . [9] 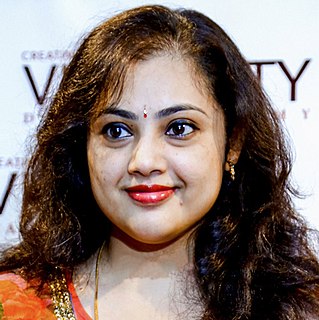 Meena is an Indian film actress who predominantly works in the South Indian film industry. Meena debuted as a child artist in the Tamil film Nenjangal in 1982 and has later appeared in films produced by various regional industries. Meena has been a superstar for over two decades by pairing up with every bigstar down south.

Ratchagan (transl. Saviour) is a 1997 Indian Tamil-language romantic action film written, produced by K. T. Kunjumon, and directed by Praveen Gandhi. It stars Nagarjuna and Sushmita Sen, alongside Raghuvaran, S. P. Balasubrahmanyam, Vadivelu and Girish Karnad in supporting roles. It was the most expensive Indian film at the time of release. 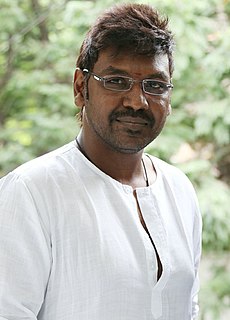 Raghava Lawrence is an Indian choreographer who has also worked in films as an actor, director, composer, dancer and playback singer. After making his debut as a choreographer in 1993, he began looking for acting opportunities. He began his career as an actor in 1998, in a Telugu film. He adopted the name "Raghava" in 2001, and worked for many prominent actors and directors in Tamil cinema throughout his career. He got his breakthrough with Telugu film Style and then Muni. Lawrence is also known for his intricate hip-hop and westernised dance moves and has won four Filmfare Awards and three Nandi Awards for best choreography. In 2015, after the death of former Indian president A. P. J. Abdul Kalam, Lawrence set up a charity trust in his name and donated ₹1 crore.

Rahman is an Indian film actor who has starred in over 150 films, primarily Malayalam, Tamil and Telugu films in a variety of roles, and has won several awards. In 80's, Rahman was a superstar in Malayalam film industry. In Tamil and Telugu cinema, he is also known by the screen names Raghuman and Raghu.

Ali is an Indian actor, comedian, and TV presenter who works predominantly in Telugu films and television. He acted in more than 1000 films in Telugu, in addition to Tamil and Hindi films. He is a recipient of two Nandi Awards and two Filmfare Awards South

Suresh Krishna is an Indian film director known for his works primarily in Tamil and Telugu films. His first Tamil film was Sathya (1988) starring Kamal Haasan. He found success with Kavithalaya's Annamalai, starring Rajinikanth. Since then, he has directed Veera, Baashha and Baba with Rajinikanth in the lead. He has also worked with leading stars like Mohanlal, Salman Khan, Chiranjeevi, Nagarjuna Akkineni, Venkatesh and Vishnuvardhan. He wrote a book called My Days with Baasha about his experiences working with Rajinikanth. In 1989 he received the Nandi Award for Best Director for Prema.

Panneer Pushpangal is a 1981 Indian Tamil-language romance film jointly directed by Santhana Bharathi and P. Vasu in their directorial debut. The film stars Pratap, Venniradai Moorthy and newcomers Suresh Kumar and Shanthi Krishna. It was released on 3 July 1981.

Jayalalita is a popular Indian character actor, who acted in about 650 movies in Telugu, Tamil, Kannada, Malayalam and Hindi movies.

Kadhalil Sodhappuvadhu Yeppadi is a 2012 Indian romantic comedy film based on the same-titled short film directed by debutant Balaji Mohan. It was simultaneously shot in Tamil and Telugu with the latter titled Love Failure. The film stars Siddharth and Amala Paul. It was released worldwide on 17 February 2012 to critical acclaim and was declared a hit.

Balaji Mohan(born 25 May 1987) is an Indian filmmaker and actor. After discontinuing his engineering studies to pursue his passion and become a director, he enrolled at a film academy and attended courses and workshops, besides participating in short film contests. After shooting more than half-a-dozen short films, he directed his first full-length bilingual film romantic comedy Kadhalil Sodhappuvadhu Yeppadi (Tamil) based on one of his own short films.

Ezhil is an Indian film director who works in the Tamil film industry. He has won 2 Tamil Nadu state awards. He made his directorial debut with the 1999 romantic blockbuster Thulladha Manamum Thullum starring Vijay and Simran. His success streak continued with Pennin Manathai Thottu (2000), Poovellam Un Vasam (2001) and Deepavali (2007). He made a comeback in 2012 after a brief sabbatical with the Sivakarthikeyan starred film Manam Kothi Paravai which opened to moderate reviews from critics, but was a commercial hit. Film Directors Suseenthiran and Karu Pazhaniappan were his assistants.

Manam (transl. Us) is a 2014 Indian Telugu-language fantasy-drama film, written and directed by Vikram Kumar and produced by the Akkineni Family under the Annapurna Studios banner. Nagarjuna appears alongside Akkineni Nageswara Rao, Naga Chaitanya, Shriya Saran and Samantha Ruth Prabhu. Amala and Nagarjuna's younger son Akhil Akkineni made cameo appearances along with other personalities with the latter making his debut in Telugu cinema.

Arjunan is an Indian film actor who has appeared in supporting roles in Tamil, Telugu and Malayalam films. He made his breakthrough portraying Siva, a hopeless college romantic, in Balaji Mohan's bilingual film, Kadhalil Sodhappuvadhu Yeppadi (2012), winning critical acclaim for his portrayal. He has since featured in comedy roles in films including Suseendran's Aadhalal Kadhal Seiveer and in Balaji Mohan's next bilingual Vaayai Moodi Pesavum (2014). 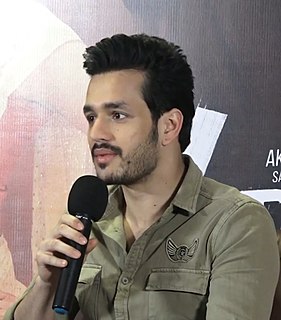 Akhil Akkineni is an American actor of Indian descent who works in Telugu films. He first appeared on screen at the age of one in Sisindri (1995) and debuted in a lead role with Akhil (2015). He has received two Filmfare Awards South. He is the captain of Telugu Warriors cricket team that competes in the Celebrity Cricket League.

Vijay Krishnaraj, also known as R Krishnan, is an Indian actor, writer, director, who is working in Tamil and Telugu Films and Television industry. He made his debut in Tamil cinema as story writer and dialogue writer of Rosappu Ravikkaikari film in 1979. He made his acting debut in the Tamil film Rajathi Rojakili along with Sulakshana, directed by S. Devarajan. He has acted over 100 films.

Chandra Sekhar, known professionally as Chatrapathi Sekhar, is an actor who primarily works in Telugu-language films and TV serials. He is known for his frequent collaborations with S. S. Rajamouli.

Alitho Saradaga is an Indian Telugu-language Television talk show produced by Gnapika Entertainments and hosted by popular Tollywood actor-comedian Ali. The show is primarily broadcast on ETV of ETV Network. The show made its debut on 24 October 2016. Kadiyala Praveena is the primary producer of the show.

Thota Ravi Krishna is an Indian television actor and director. He predominantly works in Telugu television series and shows. He is known for Mogali Rekulu (2008-2013), Varudhini Parinayam (2013-2016) and Aame Katha (2019-).