Surinyavong was the ninth son of Inthasom. In March 1765, Luang Phrabang was conquered by Burma and became the latter's vassal. Surinyavong was taken as hostage in Burma. [2]

In 1768, Surinyavong escaped from Buram and fled to Sip Song Chau Tai. He raised an army there and seized the Luang Phrabang throne in 1771. [2] He deeply hated Ong Boun, the king of Vientiane, whom he blamed for instigating the Burmese army attack on Luang Phrabang of 1765. [1] To take revenge, his army besieged Vientiane in the same year, but was defeated by Vientiane's ally, Burma.[ citation needed ] Surinyavong was forced to accept Burmese suzerainty. [1]

The Siamese king Taksin seized Lanna in 1776, now Luang Phrabang was able to shake off Burmese suzerainty. In 1778, Surinyavong informed that a Siamese army under Chao Phraya Chakri (later Rama I) was sent to invade Vientiane. Surinyavong accepted Siamese suzerainty, bringing his men to join the Siamese army in besieging Vientiane. Since then, Luang Phrabang was forced to pay tribute, an annual bunga mas . [1] 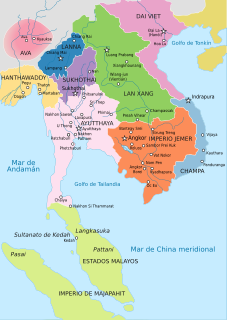 Prince Bounkhong was the last uparaja of Luang Phrabang. He was granted the title of Chao Ratsaphakhinay by King Chulalongkorn of Siam in 1884. From 1911 to 1920, he was a member of the Government Council of French Indochina.

Chao RaxavongNgao was a Laotian prince. He was the third most important person of Vientiane, just after his uncle, the oupahat Tissa. In Vietnamese records, he was called Hạt Xà Bồng (曷蛇芃).