Sussex County is located in the southern part of the U.S. state of Delaware, on the Delmarva Peninsula. As of the 2020 census, the population was 237,378. The county seat is Georgetown.

Blades is a town in Sussex County, Delaware, United States. As of the 2010 census, the town population was 1,241, a 29.8% increase over the previous decade. It is part of the Salisbury, Maryland-Delaware Metropolitan Statistical Area.

Dagsboro is a town in Sussex County, Delaware, United States. The population was 805 at the 2010 census. It is part of the Salisbury, Maryland-Delaware Metropolitan Statistical Area. 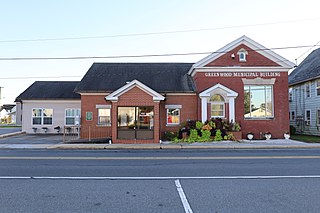 Greenwood is a town in Sussex County, Delaware, United States. The population was 973 at the 2010 census, an increase of 16.2% over the previous decade. It is part of the Salisbury, Maryland-Delaware Metropolitan Statistical Area. 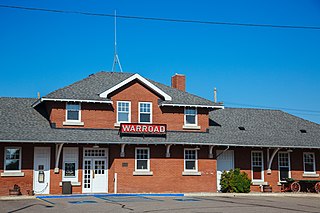 Warroad is a city in Roseau County, Minnesota, United States, at the southwest corner of Lake of the Woods, 7.5 miles (12.1 km) south of Canada. The population was 1,781 at the 2010 census. Warroad had its own newspaper before it was incorporated in 1901.

Royalton is a city in Morrison and Benton counties in the U.S. state of Minnesota, along the Platte River. The population was 1,281 at the 2020 census. The city is located mainly within Morrison County.

Jeanne-Le Ber was a federal electoral district in Quebec, Canada, that was represented in the House of Commons of Canada from 2004 to 2015. Its population in 2006 was 112,863. It was abolished for the 2015 election and dissolved into Ville-Marie—Le Sud-Ouest—Île-des-Sœurs and LaSalle—Émard—Verdun.

Apohaqui is an unincorporated community in Kings County, New Brunswick, Canada. It is located on the Kennebecasis River at the confluence of the Millstream River. Apohaqui straddles the Kennebecasis, which is also the Studholm and Sussex parish boundary.

Belleisle Creek is a Canadian rural community in Kings County, New Brunswick, west of the town of Sussex. Belleisle Creek is surrounded by rolling hills of the Caledonia Highlands. It records some of the highest snowfalls in the Maritime Provinces.

CJCW is a Canadian radio station broadcasting at 590 AM in Sussex, New Brunswick. The station plays an adult contemporary format and is owned & operated by the Maritime Broadcasting System. The station has been on the air since June 1975.

Nauwigewauk is a rural community in Kings County, New Brunswick, Canada. It is located near the communities of Quispamsis and Lakeside at the mouth of the Hammond River, and borders the town of Hampton. The people of Nauwigewauk are sometimes locally known as Nauwigewaukies.

Coles Island is a settlement and an island in New Brunswick, Canada. The island itself is located in the Canaan River. The community is centred on Route 10, Route 715, and Route 112 intersection and extends south of the island as well. It links travellers on Route 10 - the former Trans-Canada Highway - to southern communities such as Sussex, New Brunswick, Apohaqui Saint John and the Fundy coastline.

Midhurst & Easebourne Football Club is a football club based in Midhurst, West Sussex, England. They are currently members of the Southern Combination Premier Division and play at The Rotherfield.

Picadilly is a rural community in Kings County, New Brunswick, Canada. It is located immediately next to the village of Sussex Corner and at the eastern terminus of Route 111.