Suva Reka (Serbian Cyrillic : Сува Река, Albanian : Suharekë, also known as Suhareka or Theranda) is a town and municipality located in the Prizren district of central-southern Kosovo. [lower-alpha 1] According to the 2011 census, the town has 10,422 inhabitants, while the municipality has 59,722 inhabitants.

Suva Reka means "dry river" in Serbian.[ citation needed ] The Albanian spellings are Suharekë [1] or Suhareka (derived from the Slavic form), while an alternative [2] name was recently created by the Albanological Institute, [3] Therandë, [4] adopted from an unlocated Roman site (possibly in Suva Reka or Ljubižda in the Miruša valley [5] ). [6]

The municipality includes several medieval Serbian sites and old settlements, such as the villages of Banja, Dulje, Mušutište, Popovljane, Rečane, and churches of Virgin Hodegetria, St. George, Holy Trinity, St. Nicholas, among others. The settlement of Suva Reka itself was first mentioned in 1465.

From 1929 to 1941, Suva Reka was a village part of the Vardar Banovina of the Kingdom of Yugoslavia.

Between 1918 and 1941 the demographic structure of the municipality of Suva Reka has been affected by settlements and colonization such as the Serbian colonization and population settlement, for the most part from the Toplica District. [7]

During the Kosovo War (1998–99), the Yugoslav army operated in the region and it was reported that it had killed and wounded many Albanian civilians. According to the Suva Reka office of the Council for the Defense of Human Rights and Freedoms, 430 people were killed in the municipality and 67 people were missing as of late August 1999.

The Suhareka massacre conducted on 26 March 1999 committed by Serbian police officers resulted in 48 victims, fourteen of which were under 15 years old. 46 members of the victims were part of the Berisha family who were targeted because they had rented one of their homes to the OSCE observers in Suva Reke/Suharekë, who provided a sense of security to the local Albanians but withdrew from the area when NATO bombing began. After the slight withdrawal of the OSCE, incidences of abuse increased around late March, specifically with the beating and the harassment of ethnic Albanians residents by the Serbian police. Consequently, tensions soon increased after at least seven ethnic Albanians were killed by police or disappeared in unclear circumstances.

After the war, Serbian heritage was destroyed all over Kosovo. The churches (including cemeteries) of Virgin Hodegetria, St. George, Holy Trinity, St. Nicholas and others were completely destroyed in 1999 after the arrival of KFOR and the end of the war. [10]

NATO set up a military base in the municipality, Camp Casablanca.

According to the 2011 census done by the Government of Kosovo, the municipality of Suhareka had 59,722 inhabitants of which 98.9% were Kosovo Albanians. [11] According to OSCE, the whereabouts of the displaced Serb and Roma communities is unknown. [11]

Suva Reka is twinned with: 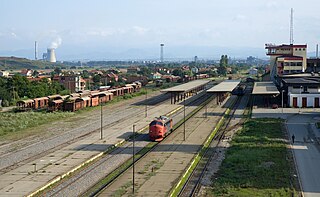 Fushë Kosova, or Kosovo Polje, is a town and municipality located in the District of Prishtina in central Kosovo. According to the 2011 census, the town of Fushë Kosova has 12,919 inhabitants, while the municipality has 33,977 inhabitants. 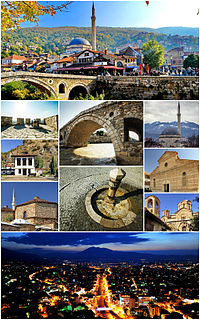 Prizren is a city in Kosovo and the seat of the eponymous municipality and district. As of the constitution of Kosovo, the city is designated as the historical capital.

Serbian enclaves are settlements in Kosovo outside North Kosovo where Serbs form a majority. After the initial outflow after the Kosovo War the situation of the Kosovo Serb communities has improved and under the Ahtisaari plan minority rights have been promoted.

Llap Region, is a region located in the north-eastern part of Kosovo. Llap in the broadest sense includes the watershed of the Lab/Llap river. The Lab water collection begins in the mount of Kopaonik in the north and west, and ends by joining the Sitnica river in Lumadh/Velika Reka, municipality of Vučitrn/Vushtrri, in the north-west of Prishtina. The topographic watershed of the Lab covers an area of 945.4 km. This area approximately corresponds to the administrative territory of the municipality of Podujevo in the current division of Kosovo. Podujevo as a city in the Llap region is the most important economic, political, administrative, educational, cultural and health center. About 120 villages gravitate to this region, although some of them administratively belong to the municipalities of Prishtina, Vučitrn or Mitrovica. The municipality of Podujevo includes 78 villages. 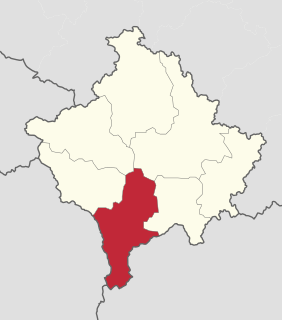 The Prizren District is one of the seven districts of Kosovo. Its seat is in the city of Prizren. According to the 2011 Census, it has a population of 331,670 and an area of 2,024 square km. Albanians form the majority of the district (85%). However, the district of Prizren is home to the biggest Bosniak and Turkish population in Kosovo, who make around 10% of the district's total population. 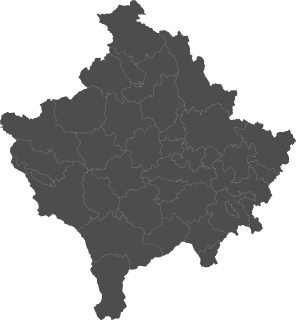 A municipality is the basic administrative division in Kosovo and constitutes the only level of power in local governance. There are 38 municipalities in Kosovo; 27 of which have an Albanian ethnic majority, 10 Serb and 1 Turkish. After the 2013 Brussels Agreement, signed by the governments of Kosovo and Serbia, an agreement was made to create a Community of Serb Municipalities, which would operate within Kosovo's legal framework. Since 2013, the agreement has not been fulfilled by Kosovo's authorities, calling upon its constitution and ‘territorial integrity’. Serbia does not recognize Kosovo as a sovereign state, but as an autonomous region according to its constitution.

Zubin Potok ; is a town and municipality located in the Mitrovica District in Kosovo. As of 2015, it has an estimated population of 15,200 inhabitants. It covers an area of 335 km2 (129 sq mi), and consists of the main town and 63 villages. 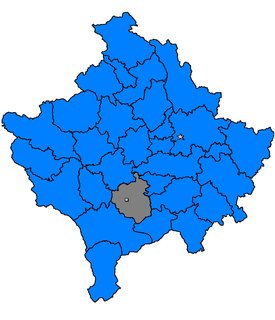 The Suva Reka massacre refers to the mass murder of Kosovo Albanian civilians committed by Serbian police officers on 26 March 1999 in Suva Reka, Kosovo, during the 1999 NATO bombings of Yugoslavia.

Skenderaj or Srbica is a town and municipality located in the Mitrovica District of Kosovo. According to the 2011 census, the town of Skënderaj has 9,372 inhabitants, while the municipality has 50,858 inhabitants.

The Turks in Kosovo, also known as Turkish Kosovars, Kosovo Turks, and Kosovan Turks, are the ethnic Turks who constitute a minority group in Kosovo. 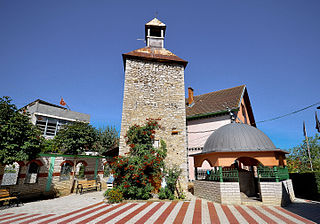 Mamuša or Mamusha is a town and municipality located in the Prizren District of Kosovo. According to the 2011 census, the municipality has a population of 5,507.

Mušutište is a village in the Suva Reka municipality in Kosovo. It is located to the west of the Nerodimka mountain. It has 10 medieval Serbian Orthodox churches, including the notable Church of Virgin Hodegetria, which was destroyed in 1999.

Dulje is a settlement in the Suva Reka municipality in the disputed region of Kosovo. The village is exclusively ethnic Albanian; in the 1991 census, it had 1399 inhabitants.

Dvorane is a village in the Suva Reka municipality in the disputed region of Kosovo. It has an ethnic Serbian majority; according to the 1991 census, it had 510 inhabitants. According to tradition, the village name is derived from dvorovi, because there were many in the village during the time of Emperor Dušan.

Rečane, or Reqan, is a settlement in the Suva Reka (Suhareka) municipality in the disputed region of Kosovo. The rural settlement lies 483 m above sea level in a cadastral area of the same name, covering 679 hectares. It has an ethnic Albanian majority. In the last census of the population, it had over 1,600 residents.

Prizren is located on the slopes of the Sharr Mountains in the southern part of Kosovo. The municipality has a border with Albania and the Republic of Macedonia. 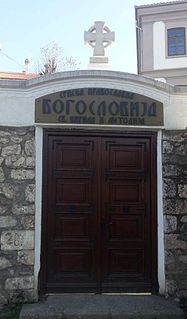 The Serbian Orthodox Seminary of Saints Cyril and Methodius, known as the Prizren Seminary, is a Serbian Orthodox theological school. The school has produced scholars and educators, though its main mission is to create clergymen. The seminary was the first cultural-educational and political center of the Serbs in Kosovo. 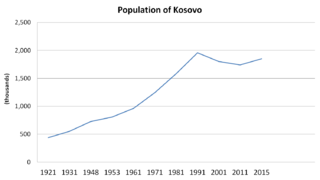 Church of Holy Apostles Peter and Paul was a Serbian Orthodox church located in Suva Reka, city and seat of the eponymous municipality in central Kosovo and Metohija. The church was built in 1938, and it belonged to the Diocese of Raška and Prizren of the Serbian Orthodox Church.