Scotchmer was raised in Pelican, Alaska, where her grandparents homesteaded after failing as gold rushers. [3]

She was most renowned for her contributions on economic literature on subjects ranging from intellectual property and innovation to game theory. She was considered one of the leading and most prominent experts on patent law and incentives for R&D and game theory. Her pieces were cited several times on work in the subject. She served as a scholar in residence at the US appellate court and has been called to testify as an expert in patent matters. [1] [2]

In 2017 The Econometric Society published a book recalling her life and work with a collection of 11 of her best-known papers. [4] 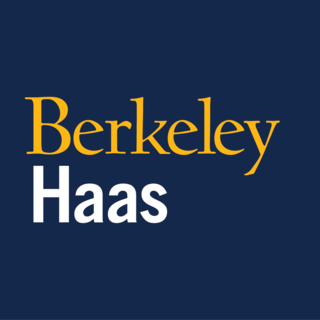 The Haas School of Business is the business school of the University of California, Berkeley. The first of its kind to be founded at a public university in the United States, it is ranked as one of the world's ten best business schools by The Economist, Financial Times, QS World University Rankings, U.S. News & World Report, and Bloomberg Businessweek. 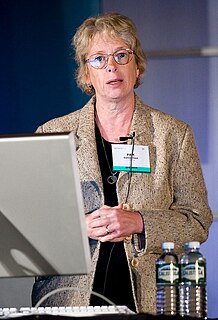 Pamela Samuelson is the Richard M. Sherman '74 Distinguished Professor of Law and Information Management at the University of California, Berkeley with a joint appointment in the UC Berkeley School of Information and Boalt Hall, the School of Law..

Patents are legal instruments intended to encourage innovation by providing a limited monopoly to the inventor in return for the disclosure of the invention. The underlying assumption is that innovation is encouraged because an inventor can secure exclusive rights, and therefore a higher probability of financial rewards in the market place. The publication of the invention is mandatory to get a patent. Keeping the same invention as a trade secret, rather than disclose by publication, could prove valuable well beyond the time of any limited patent term, but at the risk of congenial invention through third party.

James Packard "Jamie" Love is the director of Knowledge Ecology International, formerly known as the Consumer Project on Technology, a non-governmental organization with offices in Washington, D.C. and Geneva, that works mainly on matters concerning knowledge management and governance, including intellectual property policy and practice and innovation policy, particularly as they relate to health care and access to knowledge. 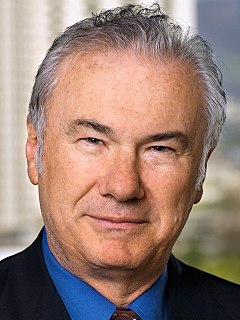 David John Teece, CNZM, is a New Zealand-born US-based organizational theorist and the Professor in Global Business and director of the Tusher Center for the Management of Intellectual Capital at the Walter A. Haas School of Business at the University of California, Berkeley.

Frederic Michael Scherer is an American economist and expert on industrial organization. Since 2006, he continues as a Professor of Economics at the JFK School of Government at Harvard University.

Aaron S. Edlin is a noted expert in law and economics, specializing in antitrust. In 1997–1998, he served in the Clinton White House as Senior Economist within the Council of Economic Advisers focusing on the areas of industrial organization, regulation and antitrust. In 1999, he co-founded the Berkeley Electronic Press, an electronic publishing company that assists with scholarly communication.

Mark A. Lemley is currently the William H. Neukom Professor of Law at Stanford Law School and the Director of the Stanford Law School Program in Law, Science & Technology, as well as a founding partner of the law firm of Durie Tangri LLP, which he has been practicing with since 2009.

Adam B. Jaffe is a freelance economist working in Boston, Massachusetts. He was previously Director of Motu Economic and Public Policy Research, in Wellington, New Zealand, and a professor of Economics at Brandeis University. His areas of expertise include Industrial Organization, technological change and innovation, law and economics, and environmental economics. The overarching theme of his work is focused on the process of technological change and innovation.

Richard J. Gilbert is an American Economist, professor at UC Berkeley from 1976 to 2000, and founder of LECG Corp.. Richard ('Rich') Gilbert served as Deputy Assistant General in the Antitrust Division of the U.S. Department of Justice in the White House from 1993 to 1995, and author of Innovation Matters: Competition Policy for the Knowledge Economy, published by M.I.T. Press. While serving for the United States Justice Department, Richard Gilbert led the development of Joint Department of Justice and Federal Trade Commission Antitrust Guidelines for the Licensing of Intellectual Property. Cureently Emeritus Professor of Economics at the University of California at Berkeley, Richard Gilbert was president of the Industrial Organization Society at University of California, Berkeley during his tenure and from 2002 to 2005 the Chair of the Economics department there. Professor Gilbert has taken special interest in Innovation, Organizational behavior, and Energy economics. Richard J. Gilbert now works as Emeritus from the University, as a consultant for Compass Lexicon and was on the Board of the East Bay College Fund Oakland Promise Association.

Rochelle Cooper Dreyfuss is an American attorney who is the Pauline Newman Professor of Law and Co-Director of the Engelberg Center on Innovation Law & Policy at New York University Law School.

Daniel Lee Rubinfeld is an American economist specializing in public economics and law and economics. He is a professor of law at the New York University School of Law, as well as the Robert L. Bridges Professor Emeritus of Law and Professor Emeritus of Economics at the University of California, Berkeley. He is the author of two textbooks: Microeconomics and Econometric Models and Economic Forecasts.

Jean Olson "Jenny" Lanjouw was an American economist, economics professor at Yale University and associated professor at the University of California, Berkeley's Department of Agricultural and Resource Economics. She undertook empirical work on poverty and economic development, developed statistical tools to project poverty and inequalities at the local level, and a policy system to provide access to drugs for developing countries without violating drug manufacturers' patents.

Nancy T. Gallini is an economist, professor emeritus, researcher, and author. She is a professor emeritus at the Vancouver School of Economics based in the University of British Columbia. She has served on multiple editorial boards such as American Economic Review, International Journal of Industrial Organization, Journal of Economic Literature and the Journal of Industrial Economics. In 2008, Dr. Gallini was appointed as a member to the Social Sciences and Humanities Research Council of Canada. From 2011-2014 Dr. Gallini served on the executive council for the Canadian Economic Association. Her research "focuses on the economics of intellectual property, competition policy, strategic alliances, licensing, and optimal patent policy". She is the co-author of Competition Policy and Intellectual Property Rights in the Knowledge-Based Economy. She has won numerous awards and a fellowship throughout her career. She has received 8 research grants from the Social Science and Humanities Research Council. These grants are one SSHRC Leave Fellowship, one SSHRC Post-Doctoral Fellowship and six SSHRC Research Grants.

Rebecca Sue Eisenberg is an American lawyer and professor. She is a Robert and Barbara Luciano Professor at the University of Michigan Law School.

Robin Feldman is a law professor, researcher, and author best known for her contributions to intellectual property and health care law. Feldman is the Arthur J. Goldberg Distinguished Professor of Law at the University of California, Hastings College of Law Feldman is a widely cited expert on intellectual property and health care law, particularly as it relates to the pharmaceutical industry, drug policy, and drug pricing.