Sveriges Radio AB (Swedish pronunciation:  [ˈsvæ̌rjɛs ˈrɑ̌ːdɪʊ] , "Sweden's Radio") is Sweden's national publicly funded radio broadcaster. Sveriges Radio is a public limited company, owned by an independent foundation, previously funded through a licensing fee, the level of which is decided by the Swedish Riksdag. As of 1 January 2019, the funds stem from standard taxation. No advertising is permitted. Its legal status could be described as that of a quasi-autonomous non-governmental organization.

The company – which was founded as AB Radiotjänst ("Radio Service Ltd") by a consortium of newspaper companies, the TT news agency, and radio manufacturing interests on 21 March 1924 – made its first broadcast on 1 January 1925: a relay of High Mass from St James's Church in Stockholm. It was officially renamed Sveriges Radio in 1957.

Sveriges Radio was originally responsible for all broadcasting in Sweden, both radio and television, and hosted the 1975 Eurovision Song Contest. A reorganization in 1979 saw it become the parent company of four subsidiaries:

This structure was dissolved in 1993, with the national and local radio companies merging under the name of the old parent company: Sveriges Radio AB.

Four radio channels are available nationwide on FM, DAB and via the internet. [1] [2]

A large part of P4's programming is regional with 26 regions each broadcasting their own local programmes during most of the day.

Sveriges Radio also provides a number of digital channels through DAB and via the internet.

SR International is the international channel of Sveriges Radio and offers programming in the following languages:

SR International is not responsible for programming in the domestic minority languages, Finnish and Sámi, which have their own dedicated digital channels.

On 16 March 2010, Radio Sweden announced the end of broadcasts on shortwave and medium wave as from 31 October 2010. [3] External service programmes would continue on the internet only. [4] Language services for immigrants to Sweden in Albanian, Syriac, Serbian, Bosnian, and Croat would also be discontinued, while programmes in English (also on the domestic service), German, Persian, Dari, and Kurdish would remain. [5]

The public's trust in the company, along with its Public Service counterparts in Sweden, may have decreased slightly during the 2000s. The decrease is most significant among right wing citizens. [6] [7]

In 2022, it was revealed that SR had registered the word ”Sommar”, meaning Summer in Swedish, as a trademark, along with other names related to their show, Sommar i P1, much to the dismay of some podcast operators. [8] 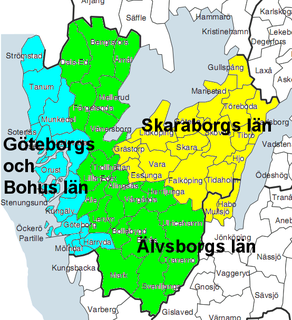 Skaraborg County was a county of Sweden from 1634 until 1997. It was disestablished at the end of 1997 when it was merged with the counties of Gothenburg and Bohus and Älvsborg to form Västra Götaland County.

P3 is a mainstream CHR-formatted station operated by Sweden's national publicly funded radio broadcasting organization Sveriges Radio. The P in P3 originally stood for Program (Programme) but today has no official meaning and is simply a name.

Radiotjänst i Kiruna AB was Sweden's TV licensing body. It was a private corporation, formed in 1988 and based in Kiruna, and upon its formation took over the administration and handling of TV licences from the state-owned telecommunications company Televerket. The company was a subsidiary of the three Swedish public service broadcasters Sveriges Television, Sveriges Radio and Sveriges Utbildningsradio. Under Swedish law, from 1956 until 2019, everyone who owned a television receiver was required to pay the license fee; the last figure was 2400 SEK per annum for the year 2018. The fee was collected by Radiotjänst but administered by the Swedish National Debt Office (Riksgäldskontoret) by means of a special account, the so-called “rundradiokontot”.

Swedish Educational Broadcasting Company is a public-service corporation dedicated to serving the needs of the Swedish general public by providing educational programming on radio and television.

Sommar i P1 is one of the most popular shows on Swedish radio. It has been broadcast every summer since 29 June 1959, originally as Sommar on P3 and since 1993 on P1.

Sweden introduced its first television licence fee in 1956 costing 25 SEK annually, the same year television was introduced to Sweden. Until 1988, the licence fee was administered by a division of the Swedish state-owned telecommunications company Televerket, when that function was taken over by Radiotjänst i Kiruna AB which was jointly owned by the three public broadcasters Sveriges Television, Sveriges Radio and Sveriges Utbildningsradio.

P4 is a national radio channel produced by the Swedish public broadcaster Sveriges Radio. P4 was started in 1987 as a network of regional stations, but national programming was added in 1993 when P3 was relaunched as a specialist youth channel and P4 took over a large part of P3's former programming intended for a more adult audience.

Bengt Walter Feldreich was a Swedish radio and television journalist, TV-producer and television presenter. He worked for public service between 1950 until 1985, amongst others the show "Snillen spekulerar" on SVT, the annual Christmas Eve broadcasts from the same channel.

These are lists of Swedish county governors.

Sweden held a general election on the 16 September 1973. Results are published by the Statistical Central Bureau.

Sweden held a general election on 15 September 1968, to elect the members of the Second chamber of the Riksdag. This was to be the final bicameral Riksdag elected. As of 2020, this was the final time a party has held an outright majority in the Riksdag after the Social Democrats won 125 out of the 233 seats.

Wikimedia Commons has media related to Sveriges Radio .
This page is based on this Wikipedia article
Text is available under the CC BY-SA 4.0 license; additional terms may apply.
Images, videos and audio are available under their respective licenses.