Svetlana Vladimirovna Nemolyaeva (Russian : Светла́на Влади́мировна Немоля́ева; born 18 April 1937, Moscow) is a Soviet and Russian actress of film and theatre. She is the widow of Alexander Lazarev. [1]

In 1958, after graduating the Shchepkin's Theatre College, Nemolyaeva joined the Theatre on Malaya Bronnaya, then, after just one season moved to the Mayakovsky Theatre where she remained for the rest of her life. One of her first successes there was the part of Ophelia in Shakespeare’s Hamlet , produced by the then theatre's director Nikolai Okhlopkov. Later, as Andrey Goncharov came to become the head of the theatre, she created several outstanding characters, notably Blanche in Tennessee Williams's A Streetcar Named Desire and the Mayoress Anna Andreevna in Nikolai Gogol’s Revizor . [2]

Svetlana Nemolyaeva's first success on screen came was the part of Olga Larina in Roman Tikhomirov's Evgeny Onegin (1958). She had to wait several years for another big part, in Konstantin Khudyakov's Such a Short Long Life (1975), co-starring Alexander Lazarev, fellow Mayakovsky Theatre actor whom she married in 1960. Her real breakthrough came when Eldar Ryazanov invited her to play Olya Ryzhova in his highly successful intellectual comedy Office Romance . Later he filmed her again, in The Garage . In 1980 Svetlana Nemolyaeva was awarded the prestigious title of the People's Artist of Russia. In the 1980s and 1990s Nemolyaeva continued to appear on screen regularly; critically acclaimed were her parts of Madam Zizi (Say a Word for a Poor Hussar), actress Nina Ossovskaya (The Intrusion), Irina in The Relatives (TV play) and Matilda (The Dame’s Visit). She was awarded (twice) Order For Merit to the Fatherland, 4th and 3rd class (2007, 2012). [2] 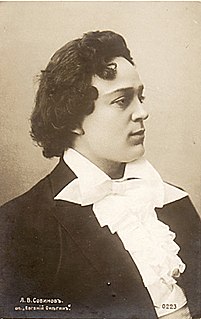 Eugene Onegin, Op. 24, is an opera in 3 acts, composed by Pyotr Ilyich Tchaikovsky. The libretto, organised by the composer himself, very closely follows certain passages in Alexander Pushkin's 1825-1832 novel in verse, retaining much of his poetry. Tchaikovsky's friend Konstantin Shilovsky contributed M. Triquet's verses in Act 2, Scene 1, while Tchaikovsky himself arranged the text for Lensky's arioso in Act 1, Scene 1, and almost all of Prince Gremin's aria in Act 3, Scene 1. 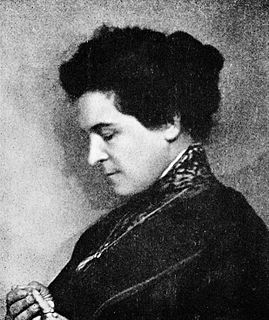 Olga Leonardovna Knipper-Chekhova was a Russian and Soviet stage actress. She was married to Anton Chekhov.

Poor Nastya is a Russian telenovela originally aired in the Russian Federation from 31 October 2003 to 30 April 2004 on the STS, and of Ukraine from 10 november 2003 to 7 May 2004 on the 1+1. Based on the imperial setting of the 19th century, the series reached international success and was shown in China, Israel, Serbia, Kazakhstan, Georgia, Greece, Bulgaria and more than twenty countries worldwide. With the budget of $11.8 million, it is the most expensive Russian television project so far. The sequel was planned, but had not been produced yet. 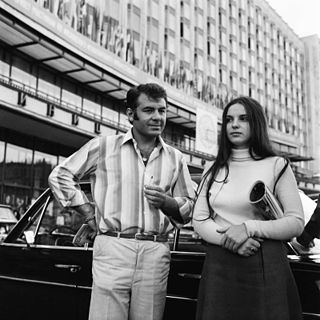 Svetlana Andreevna Toma is a Moldovan actress. She debuted at the Moldova-Film studio in 1966. She worked in Moldova and Russia.

Actress is a 2007 Russian comedy film directed by Stanislav Govorukhin.

Alexander Sergeyevich Lazarev was a Soviet and Russian theater and film actor, the People's Artist of Russia and the USSR State Prize laureate. A Moscow Mayakovsky Theater veteran Lazarev appeared in more than 100 films, including One More Thing About Love (1968) which made him famous.

Ksenia Leonidovna Khairova is a Soviet and Russian stage and film actress.

Lyudmila Vasilyevna Tselikovskaya was a Russian actress, best remembered for her leading parts in films like Hearts of the Four (1941–1944), Anton Ivanovich Gets Angry (1941), The Aerial Cabman (1943), Ivan the Terrible (1944), Twins (1945) and The Busy Estate (1946). She had a troubled artistic career and received her People's Artist of the RSFSR title only in 1963. Ignored by the officialdom, Tselikovskaya was admired by the general public and is revered as a true legend of the Soviet War time cinema.

Svetlana Sergeevna Antonova is a Russian theater and film actress.

Happy Flight is a 1949 Soviet musical comedy film directed by Vladimir Nemolyayev and starring Nikolay Kryuchkov, Mikhail Zharov and Vera Orlova. It was made by the Soviet Union's domint studio Mosfilm. A young truck driver develops both a professional and romantic rivalry with a fellow driver.

Svetlana Ivanovna Savyolova was a Soviet Russian film and stage actress. Savyolova starred in seven films and then acted on stage. For her look Savyolova was sometimes called "the Russian Brigitte Bardot".

The Call of Love is a 1945 Soviet comedy film directed by Konstantin Yudin.

The Bottomless Bag is a 2017 Russian drama film directed by Rustam Khamdamov. The film is based on Ryunosuke Akutagawa's 1922 story In a Grove which takes place during the times of Tsar Alexander II.