The Swedish–Norwegian War, also known as the Campaign against Norway (Swedish : Fälttåget mot Norge), War with Sweden 1814 (Norwegian : Krigen med Sverige 1814), or the Norwegian War of Independence, was a war fought between Sweden and Norway in the summer of 1814. The war was a Swedish victory and led to Norway being forced into the United Kingdoms of Sweden and Norway, a union with Sweden under the Swedish king Charles XIV but with Norway having its own constitution and parliament.

As early as in 1812, prior to the Napoleonic invasion of Russia, the Swedish Crown Prince Charles John had entered into an agreement with Tsar Alexander I that Russia would support a Swedish attack on Norway in order to force Denmark-Norway to cede its northern part to Sweden. [1] The Swedish attack against Norway was rejected, however, Swedish forces were instead directed against France in Central Europe. The Swedish troops were deployed against Napoleon's forces as a result of agreements between Charles John and diplomats from the United Kingdom and Prussia, which indicated that Norway would be ceded to Sweden after France and its allies (which included Denmark-Norway) were defeated. [2]

By the Treaty of Kiel in January 1814, King Frederik VI of Denmark-Norway had to cede Norway to the King of Sweden, due to Denmark-Norway's alliance with France, and its defeat during the later phases of the Napoleonic Wars. This treaty was however not accepted by the Norwegians.

As the head of the new state, Christian Frederick desperately tried to gain support from the United Kingdom, or any of the other major powers within the Sixth Coalition, in order to maintain Norway's independence. However, the foreign diplomats gave no hope for any outside support to the Norwegians.

The Norwegian Army mustered 30,000 men, and it had taken up positions away from the border with Sweden, in the fear of being outflanked. The Norwegian navy had few vessels, and most of them were stationed at the islands of Hvaler, close to Sweden.

The Swedish Army consisted of 45,000 men, experienced and well-equipped soldiers. The Swedish Navy had a number of large vessels and a capacity for moving and landing troops.

The hostilities opened on 26 July with a swift Swedish naval attack against the Norwegian gunboats at Hvaler. The Norwegian army was evacuated and the vessels managed to escape, but they did not take part in the rest of the war. The main Swedish offensive came across the border at Halden, bypassing and surrounding the fortress of Fredriksten, and then continuing north, while a second force of 6,000 soldiers landed at Kråkerøy outside of Fredrikstad. This town surrendered the next day. This was the start of a pincer movement around the main part of the Norwegian army at Rakkestad.

On the front towards Kongsvinger the forces were more evenly matched, and the Norwegian army eventually stopped the Swedish advance at Lier on 2 August, and won another victory at Matrand on 5 August. On 3 August, King Christian Frederick reached the front at Østfold and was persuaded to change his strategy and use the 6,000 men stationed at Rakkestad in a counterattack against the Swedes. The order to counterattack was given on the 5th of August, but the order was recalled a few hours later. The Norwegian forces therefore withdrew over the Glomma river at Langnes in Askim. [3] The last major battle of the war was fought on 9 August at the bridgehead at Langnes, where the Swedish forces once more were driven back. [4] Sweden then attempted to outflank the Norwegian line, and successfully did so during the battle of Kjølberg Bridge on the 14th of August. The Swedes then had a clear path to Kristiania, the Norwegian capital. In addition, the British blockade of Norway gradually worsened the Norwegians' situation, making food shortages common everywhere. The proximity of Swedish armies and the British blockade eventually made the Norwegians' situation unsustainable.

Although the Norwegian Army had won at Langnes, it was nevertheless clear to both the Norwegian and Swedish military authorities that a defeat was inevitable. [4] Even as they had managed to deliver several minor offensive blows to the Swedes, thus applying pressure on the Swedes to accept Norway as a sovereign nation[ citation needed ], it was considered impossible to try to stop the Swedes in the long run. [4] The Swedish offer of negotiations was therefore accepted as the war had put a heavy strain on the Norwegian finances. Every day of delay in securing Norway by the Swedes brought uncertainty to them regarding the outcome, so both parties were interested in a quick end to the war.

For the ordinary Norwegian soldier the war had seemed ill-prepared and ill-fought. [4] The allegations of the loss were against Christian Frederick and the Norwegian general Haxthausen; the latter was accused of treason. For the Norwegian government it probably[ citation needed ] had been more of a matter of getting the best possible bargaining position, as without the support of major powers Norway's independence was impossible to secure. But by agreeing to talks following the victory at Langnes they were in a situation where they could avoid an unconditional surrender.

On 10 August, Bernadotte presented a proposal for a cease-fire. The proposal included a major concession—Bernadotte, on behalf of the Swedish government, accepted the Eidsvoll constitution. In doing so, he tacitly gave up any claims that Norway would be merely a Swedish province. Negotiations started in Moss, Norway on 10 August 1814, and after a few days of hard negotiations, a cease fire agreement, called the Convention of Moss, was signed on 14 August 1814. King Christian Frederick was forced to abdicate, but Norway remained nominally independent within a personal union with Sweden, under the Swedish king. Its Constitution was upheld with only such amendments as were required to allow it to enter into the union, and the two united kingdoms retained separate institutions, except for the King and the foreign service and policy. 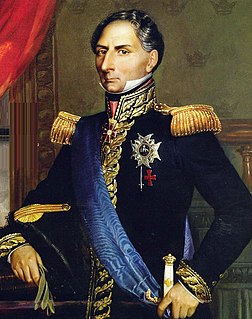 Charles XIV John or Carl John was King of Sweden and King of Norway from 1818 until his death in 1844.

The Convention of Moss (Mossekonvensjonen) was a ceasefire agreement signed on 14 August 1814 between the King of Sweden and the Norwegian government. It followed the Swedish-Norwegian War due to Norway's claim to sovereignty. It also became the de facto peace agreement and formed the basis for the personal union between Sweden and Norway that was established when the Norwegian Storting (Parliament) elected Charles XIII of Sweden as king of Norway on 4 November 1814. The Union lasted until Norway declared its dissolution in 1905. 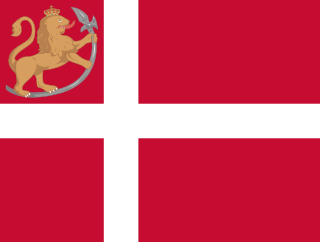 In August 1814, after a loss in the Swedish–Norwegian War, Kingdom of Norway was forced to join in a personal union with the Kingdom of Sweden, thereby becoming subject to a naval blockade by the British Empire, but remaining largely autonomous within the union. Although nationalist aspirations were not to be fully realized until the events of 1905, 1814 was the crisis and turning point in events that would lead to a fully independent Norway.

The Northern Seven Years' War was fought between the Kingdom of Sweden and a coalition of Denmark–Norway, Lübeck and Polish-Lithuanian commonwealth between 1563 and 1570. The war was motivated by the dissatisfaction of King Frederick II of Denmark with the dissolution of the Kalmar Union, and the will of King Eric XIV of Sweden to break Denmark's dominating position. The fighting continued until both armies had been exhausted, and many men died. The resulting Treaty of Stettin was a stalemate, with neither party gaining any new territory. 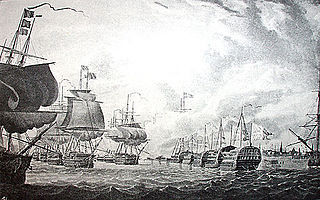 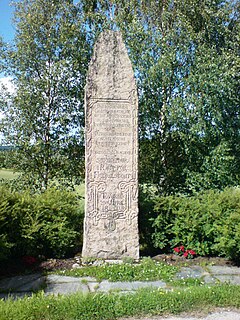 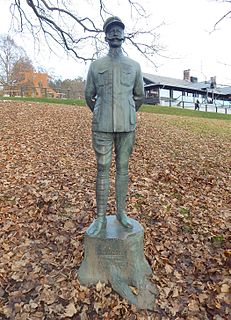 Henrik August Angell was a Norwegian military officer, sportsman, and writer. He was a ski pioneer and the first Norwegian delegate to the International Olympic Committee.

The invasion of Hvaler was a Swedish military invasion during the Swedish-Norwegian War of 1814. 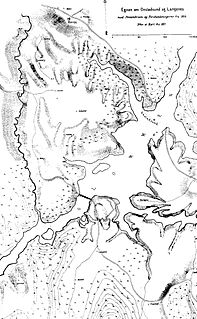 The Battle of Langnes, or the Battle of Langnes Entrenchment, was a battle fought between Norway and Sweden as a part of the Swedish-Norwegian War of 1814. The battle, even as it ended inconclusively, served as a tactical victory to the Norwegians since they now could avoid an unconditional surrender to the Swedish.

The Battle of Trangen took place on 25 April 1808 at Trangen in Flisa, Hedemarkens Amt, between Swedish and Norwegian troops, as a part of the Dano-Swedish War of 1808-1809. The invading Swedish troops, led by Colonel Carl Pontus Gahn, were surrounded and forced to surrender by the Norwegian troops under the command of Bernhard Ditlef von Staffeldt. Gahn and around 450 of his troops were captured.

The Battle of Rødenes was a series of skirmishes that took place in late April and early May 1808 from Lund in Hemnes to Ørje as a result of the Swedish invasion of Norway during the Dano-Swedish War of 1808-1809.

The Battle of Furuholm was a naval battle that took place at Furuholm outside Strömstad on April 28, 1808 as part of the Dano-Swedish War of 1808-1809.

The Battle of Kjølberg Bridge was fought 14 August 1814, during the Swedish–Norwegian war of 1814. The Swedish army had problems repairing the bridge due to constant fire from the Norwegian side of the river. It was then a small Swedish force of 75 men passed over the river at a hidden point. Once over they waited for reinforcements but none came; but instead the order of attacking the vastly larger Norwegian force. The Colonel response to the attack order have been famous "It is unreasonable to attack with only 75 men when you face a whole regiment." "But such an order isn't given to me twice. March!" During cheers the Swedes rushed up the hill toward the mansion that was occupied with 600 men. The attack was surprising and decisive. The Norwegians quickly left the stand. This was the last battle fought during the Swedish–Norwegian War. The Convention of Moss, providing a cease fire agreement, was signed that same day.

The Jämtland Campaign of 1808 was a Dano-Norwegian military campaign into the Swedish province of Jämtland during the Dano-Swedish War of 1808-1809.

Fredrikstad Fortress, under the command of Nils Christian Frederik Hals, was captured by the Swedish armed forces on August 4, 1814.