The Swedish Football Association (Swedish : Svenska Fotbollförbundet, SvFF) is the governing and body of football in Sweden. It organises the football leagues – Allsvenskan for men and Damallsvenskan for women – and the men's and women's national teams. It is based in Solna and is a founding member of both FIFA and UEFA. SvFF is supported by 24 district organisations.

Svenska Fotbollförbundet (SvFF) (English:Swedish Football Association) was founded in Stockholm on 18 December 1904 [1] and is the sports federation responsible for the promotion and administration of organised football in Sweden and also represents the country outside Sweden. SvFF is affiliated to the Swedish Sports Confederation (RF) and the Fédération Internationale de Football Association (FIFA) and Union of European Football Associations (UEFA).

Karl-Erik Nilsson has been the President since 2012. In 2009 there were 3,359 clubs affiliated to the Svenska Fotbollförbundet with a total of more than a million members, of whom about 500,000 were active players. Together, they accounted for almost one third of the total Swedish sports movement activities. [2]

SvFF was the sole owner of Sweden's national stadium, the Råsunda Stadium in Solna, from 1999 until it was replaced in 2012 by Friends Arena, located about 1 kilometer away and also in Solna. SvFF is the lead partner in the consortium that owns the current stadium, and maintains its offices there (as it did at the prior stadium). [3]

The Swedish Football Association Football Gala is held annually in November since 2005. It includes the award for the best male player (Guldbollen) and female players (Diamantbollen).

The first Swedish national football championship was played in 1896 but it was 7 years later in 1903 that the Riksidrottsförbundet was formed which was to be the precursor to the Svenska Fotbollförbundet. The new organisation had a football and hockey section (hockey being the term for bandy at that time and not ice hockey or field hockey). In 1904 Sweden was one of 7 nations that founded FIFA. [4] It also introduced ice hockey to Sweden in 1920, before the 1922 establishment of the Swedish Ice Hockey Association. Before the 1925 establishment of the Swedish Bandy Association, the Swedish Football Association also administered organized bandy in Sweden.

In 1906, the name Svenska Fotbollförbundet (Swedish Football Association) was officially accepted and the following year SvFF was officially voted into FIFA. On 12 July 1908, Sweden's first international match was played in which Norway were defeated 11–3 in Gothenburg. However the Olympics were a disappointment for Sweden, losing 1–12 to England and 0–2 to the Netherlands. [4]

Svenska Fotbollförbundet is responsible for organising the following competitions:

Swedish football is built on a single pyramid league system. While the SvFF administers the top leagues, the 24 district or regional associations administers youth football and the lower-tier leagues from Division 4 (men) and Division 3 (women), respectively, and further below. [5]

The 24 district organisations are as follows: [6]

Malmö Fotbollförening, commonly known as Malmö FF, Malmö, or MFF, is a professional football club and the most successful football club in Sweden in terms of trophies won. Formed in 1910 and affiliated with the Scania Football Association, Malmö FF is based at Eleda Stadion in Malmö, Scania. The club has won a record 22 Swedish championship titles and the most national cup titles with 15.

Svenska Cupen is a knockout cup competition in Swedish football and the main Swedish football cup. Svenska Cupen usually refers to the men's tournament, although a women's tournament is also held. Each year 96 teams compete, comprising the 16 teams from Allsvenskan and the 16 teams of Superettan together with 64 teams from lower tiers of the league system. The winners qualify for the qualifying stages of the UEFA Europa League. The winner is awarded Gustaf VI Adolf Cup.

Åtvidabergs Fotbollförening, also known simply as Åtvidabergs FF, Åtvidaberg, Åtvid or ÅFF, is a Swedish professional football club based in Åtvidaberg. The club is affiliated with Östergötlands Fotbollförbund and plays their home games at Kopparvallen. The club colours, reflected in their crest and kit, are blue and white. Formed on 1 July 1907 as Åtvidabergs IF, the club was most successful during the 1970s when they won two national championship titles and two national cup titles. With a population of around 7,000, Åtvidaberg is the smallest town ever to bring home a Swedish league title. They currently play in Division 1, where the season lasts from April to November.

Athletic Football Club Eskilstuna, also known as AFC Eskilstuna or simply AFC, is a Swedish football club located in Eskilstuna. The club has previously been known under the names FC Café Opera and Väsby United before switching ownership and their identity again in 2012 to AFC United. During the 2016 season it was once again decided that they would switch their name, identity, as well as locality. Choosing to move to Eskilstuna, about 110 kilometers west of Stockholm, they are since known as AFC Eskilstuna. They compete in Superettan, the second highest tier of Swedish football, and play their home matches at Tunavallen. AFC Eskilstuna are affiliated to Södermanlands Fotbollförbund.

IFK Luleå is a Swedish football club formed in 1900, located in Luleå. The club merged with Luleå FF and played under the name Luleå FF/IFK from 1986 to 1989.

IFK Eskilstuna is a Swedish football club located in Eskilstuna in Södermanland County. In their early seasons IFK had a proud record as an Allsvenskan club but they now play in Division 2 Västra Svealand, which is the fourth tier of Swedish football.

Idrottsklubben Sleipner is a sports club in Norrköping, Sweden; the main sports are football and ten-pin bowling. It was founded in 1903, and named after the deity Odin's horse Sleipnir from Norse mythology. Currently, the club's senior men's team plays football in Division 2. They are mostly known for winning Allsvenskan in 1938, but have since been overshadowed by local rivals IFK Norrköping both locally and nationally. The rivalry in beginning 1900 up until 1950 was often fierce as IK Sleipner was the workingclass team whilst IFK Norrköping came from the academical class. The club is affiliated to the Östergötlands Fotbollförbund. In the early 20th Century, the club also played bandy. also the record holders of most goalscorers in one game against Cuba in 1938 with 7 goals.

Råå IF is a Swedish football club located in Råå, south of Helsingborg.

Göteborgs FF is a Swedish football club located in Gothenburg.

Råsunda IS is a Swedish football club located in Solna. 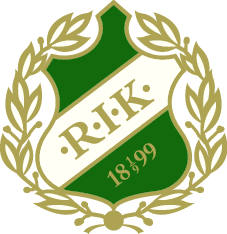 FC Rosengård, formerly Malmö FF Dam (1970–2007) and LdB FC Malmö (2007–2013), is a professional football club based in Malmö, Scania, Sweden. The team was established as Malmö FF Dam in 1970. It started out with playing 7 seasons in the Division 1, but has played in Damallsvenskan in since it formed in 1988. The team has won the league a record twelve times, the latest in 2021. As of the end of the 2015 season, the club ranks first in the overall Damallsvenskan table. FC Rosengård play their home games at Malmö IP in Malmö. The club it merged with, FC Rosengård 1917, has both men's and women's teams.